Work continues to dominate my life and so my gaming time has been greatly reduced. All I have been able to do is to catch up on a lot of reading although I have now completed the great Command and Colours label-fest. The next step will be organise the rules - all of these will be placed in binders in due course - and tackle the terrain question but this is not something I need to hurry. 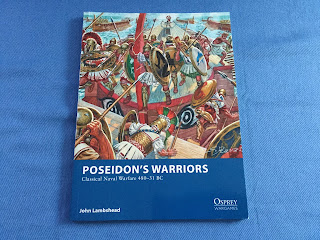 
I was delighted when Osprey announced that they were going to release a set of ancient naval warfare rules and so acquiring a copy was an obvious step for me. The rules, called Poseidon's Warriors - Classical Naval Warfare 480 - 31 BC by John Lambshead, look really good. They are designed for large actions and the rules are fast play for sure. They are not even hex based....Players use squadrons - 5 vessels for the trireme era - and alternate moving these depending on the initiative.
This makes for a very interactive game and places a premium on good tactics.

The book contains not only the rules but also a naval timeline and suggested historical match ups. There is a nice selection of eye candy although if I was being picky I would have liked to have seen some models other than Rod Langtons in action. Don't get me wrong, Langton's models are lovely but my entire collection consists of Navwar models which are less detailed but are easier on the wallet. I will certainly be getting some of his terrain pieces though! My plan is now to use these rules for Salamis - so hexes will not be featuring. 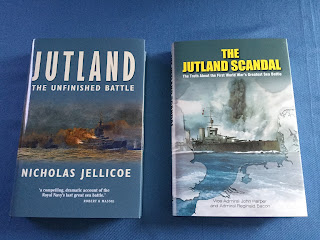 
The next acquisition is a couple of books concerned with Jutland. I must thank Dave Manley for recommending the Nick Jellicoe title - it really is a first class read - and I have to say I enjoyed the BBC documentary featuring the author. It also leads nicely into The Jutland Scandal. This book is really two books in one as it contains The Truth About Jutland by Rear-Admiral J.E.T Harper and also The Jutland Scandal by Admiral Sir Reginald Bacon. Needless to say certain historical figures did not come out particularly well in either title - and that is a story all of its own.
Posted by David Crook at 15:35 6 comments: