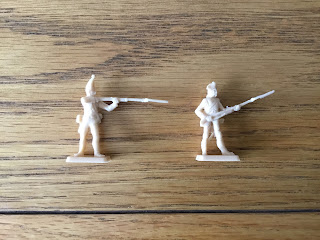 Magnificent figures from a bygone age....

As mentioned in my previous blog post I visited the house of the couple I acquired the three volumes of Miniature Warfare from. Alas the the other bound volumes are not of this magazine - they are instead of Military Modelling. The volumes (again, in binders) are for 1971 and then 1973 to 1985. I shall have a look around to see if anyone would be interested in the same. There is also a large selection of bound copies of the Bulletin - the journal, I believe, of the British Model Soldier Society. Once I have fuller details I will let you all know.

The big news though, is that there is a large number of unpainted plastic Spencer Smith Miniatures - the 18th century types. Of those figures that featured in the War Game by Charles Grant there is roughly some 50 or so of the tricorn wearing cavalry and an indeterminate number of the marching grenadier and centre company types. There is also around a hundred of each of the figures pictured above. I will be getting an exact count soon.

All of the Spencer Smith figures are now available in metal and in my ignorance I thought that only the cruder versions appeared in plastic - certainly not the handsome looking fellows above.

There are also books and Hinchliffe figures to be disposed of and as soon as I have details I will be sure to post them.

A Blast from the Past 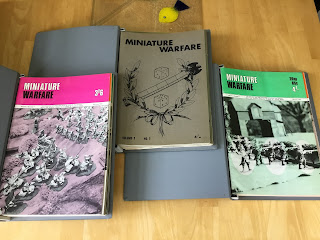 Now that is something you don't see very often....


Another Sunday and another boot sale. This time I was able to acquire something very special indeed. I am sure that many wargamers of a certain age will remember the magazine Miniature Warfare published by John Tunstill. I can remember buying a copy of this with my pocket money from the shop that John ran near the Imperial War Museum and being mightily impressed - it seemed altogether a more polished and serious offering than the Wargamer's Newsletter. In retrospect one could argue that Miniature Warfare, with its mention of such things as national conventions and such like, was attempting to bring gaming to the masses and more in the mainstream. It is ironic that after the passage of some forty years my thoughts are more Featherstone-like than Tunstill but things change.

I was able to acquire the first three volumes of the magazine in binders from issue number one for the princely sum of £3 in total and will also be acquiring some later volumes gratis. The seller was disposing of the last of the collection belonging to a deceased distant relative and amongst the bits and pieces therein are a number of books and a lot of unpainted Spencer Smith plastic figures that I will be taking a closer look at later next week.

A quick glance through the contents has some rather interesting articles although naturally some of the adverts are a little on the 'quaint' side....

This is a wonderful piece of wargames history that I shall enjoy reading - I will also take a look at Discovering Wargames and the various spin offs that used to be available from Shire Publications - and it will be interesting to see how much of the content has stood the test of time.
Posted by David Crook at 18:40 19 comments: