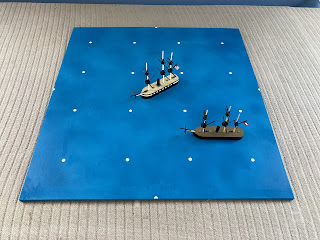 A US Frigate attempts to engage a Confederate commerce raider on the high seas. Sea or indeed any waterway colour is always a minefield in my experience so I have opted for safety first and have gone with the above - even for the ‘coffee coloured’ Mississippi! At least it is easy to tell that it is a naval game….or even an aerial one!

I have finished my board for use with my 3 x 3 Ironclad rules. It started life as an off cut from a sheet of 8mm thick plywood - I have another couple of spare pieces that have been earmarked for various projects - painted using a tin of Wilkinson’s ‘Totally Teal’ matt emulsion paint, some sticky white ‘dots’ and a coat of satin varnish to give it some sheen. It is not perfect but it does suit the models I have built and so is in keeping with the overall look of the thing. Whilst the colour is quite tropical looking it will suffice as I am firmly of the ‘blue sea or indeed any waterway’ school of naval wargames! Quite what the brown water types would think of this is anyone’s guess but I take solace that not for nothing was the River Danube known as the ‘Blue Danube’ - slightly out of theatre I know but you get the drift of what I am getting at!

I opted to use white dots rather than lines so that the grid effect was less intrusive. For some reason it actually makes the playing area seem larger than it is although I have already thought of making a similar board but using bigger squares (these are 6”). The nine central squares are enclosed by four areas that perform a similar function to the reserve and flank areas of the various land based versions of the rules. My plan is to use these for grand tactical manoeuvres to add a little uncertainly to the proceedings. Each of the surrounding four zones overlaps three squares so a ship or ships entering the central battle zone may be able to exercise some tactical acumen when doing so as the opponent will not know exactly where they are coming from. I have not even begun to think about the rules for using this but I will certainly be doing so. This painted design is subtly different from the previous unpainted version due to the change in the outer zones.

As an aside the board will also serve for use in 3 x 3 aerial games and I suspect you will not be surprised that I have a cunning plan in that direction….

Looks very good David, home crafted like those wonderful ships. Great to read that you managing to enjoy some hobby time again now.

David -
As expected. those ships look very well on a blue waterway.
Ion

Thank you old chap and yes, getting some ‘me time’ has been hugely beneficial! I do not have a lot of spare time at present so I need to get the maximum out what I do have - this is why the whole 3 x 3 thing works so well for me. So far every game has taken me longer to write the blog post than to fight the battles themselves!

I am planning an action for over the Easter weekend involving 6 ships and reckon that even of the game id a dud it will certainly look the part!

I learned that from my old plastic covered board that using a bright colour really makes the ships ‘pop’ so the blue I used seemed ideal. The varnish seems to have added to the texture of the surface and has given it some very subtle but pleasing variations in tone. I will let you into a secret though, I am thinking about a greener/browner looking board for inland waterways but the blue board will do for the time being!

What an excellent 3 x 3 naval wargame board! The use of the white dots on a blue background is very effective … and seeing it in use with your model ships is an example I am tempted to copy asap!

I like that a lot David..very nice shade of blue!

Thank you old chap! It was really easy to cobble together from odd bits and pieces I had lying around. It certainly makes the models stand out so why not have a go? Thinking about it your models that are designed to work on a Hexon tile would look even better using a 6 inch square as the illusion of distance would be greater.

It is for that reason I am seriously thinking about a board with 8” squares.

Thank you old chap - much appreciated! I was a little wary of the blue when first applied but the varnish seems to have dialled it back a little. I am rather taken with the shade and will certainly use it on the 6ft by 4ft table I have that needs a lick of paint!

The colours can be whatever you like! I have seen the Mississippi a dark chocolate brown colour, the Caribbean pink/purple and the sea round South Georgia almost jet black against the white of a glacier!

That looks very smart, and I agree that water should be blue. The white dots work really well.

You are absolutely right and whilst I have never seen the Mississippi I have seen the Thames Estuary in many different shades ranging from deep blue to grey via various shades of dull green!

Blue seems to be the universal water colour so who am I to question the wisdom of our ancestors?

Thank you old chap! I must confess to being pleasantly surprised at how well it looks with some models on it!

Now all it needs is an action to christen it….(and yes, plans are afoot to make this happen!).

That looks very good David and I'm a blue water fan for gaming. At my old club there used to be a glossy brown series of strips that few people realised where meant to be for a river. If they had been blue it would have been obvious.

The colour of water is a tricky thing to get right as there are so many variables that can effect it. You could look at the same stretch every day for a year (I am not talking about standing water here) and there would be substantial variations on a theme!

I am going to stick with blue although ironically I was thinking about an earth coloured board for WW1 Western Front style games that would could also serve for the Mississippi!