The Battle of Mobile Bay - note the sinking Union monitor the U.S.S. Tecumseh - sunk by a torpedo (a mine in the parlance of the day).

Now that I think I have gone as far with the 3 x 3 variant of my ironclad rules as I think I need to without the benefit of ‘live player’ play testing, I wanted to try a large scale battle to see how the system stacks up. Large is relative as under normal circumstances a naval war game of six or so models would not usually be thought of as being excessive but the focussed playing area of the 3 x 3 system means that it is. It was a feature of many ACW naval engagements that a fair number of vessels could be operating in a fairly compact area and so the 3 x 3 game board reflects the ensuing chaos rather nicely!

The action I have settled on is in many ways a quite common one for the period - the bombardment and attempted neutralisation of a Confederate coastal or riverine fortification - so I am confident that the historical premise will at least be grounded in fact. ‘Based upon’ and ‘Purely representational” are the phrases that spring to mind! 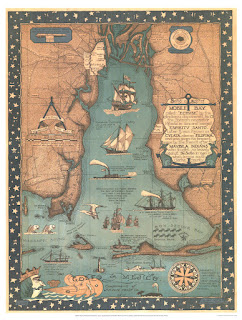 Mobile Bay and the surrounding area.

Following the Confederate defeat at Mobile Bay the Union fleet was tasked with clearing out any remaining pockets of rebel resistance along the surrounding coastline. It would be arduous work as the entire region was beset with small inlets and coves - the area had been extensively used by Confederate blockade runners for this very reason - and each one had to be painstakingly investigated and subdued where necessary. Most of these coastal hideaways were little more than convenient anchorages although a few were based around a more permanent setting, typically a minor fishing community. Fewer still boasted any kind of fortification but it was one such location that attracted the attention of the Union command - Fort Yuwatus.

The fort in question was not actually a fort at all. Originally it was built as a series of assorted utility buildings built within a walled enclosure to support the oyster beds in the bay itself but with the outbreak of hostilities had been hastily converted into a small fortification facing west and overlooking the bay. The exterior boundary wall - rectangular in shape - was reinforced with packed earth and timber along the interior and when completed successfully enclosed all the smaller buildings that made up the complex. The original buildings were of a similar height which meant that a high level walkway could be added to cover the entire perimeter and, when built, was strong enough to take eight pieces of artillery. Although the whole structure was improvised the end result was a sturdily constructed and imposing looking fortification.

Aside from the gun crews themselves, the small garrison, numbering just over a hundred men, also lived in the complex although it was not a pleasant place to be quartered. The whole collection of ramshackle buildings had been used extensively by the oyster fishing community and so everywhere was permeated with the smell of peat smoke and rotten shellfish. Still, thus far it had been a quiet posting and despite the living conditions being less than ideal the garrison, to a man, considered themselves fortuitous to be there rather than in the frontline somewhere.

The defeat at Mobile Bay changed all that. Unexpectedly the small fort was suddenly in the frontline and so, with orders to hold out as long as possible, the garrison made ready for the inevitable assault. They would not have to wait long.

The defenders at Fort Yuwatus were well supplied with ammunition and foodstuffs and also had access to a supply of command detonated torpedoes. Although these had been deployed some weeks previously, the garrison commander was confident they would help bolster the defence of the fort from any attacks from the sea. The Confederates did have one substantial advantage though. Moored just around the headland, protected by torpedoes and the guns of the fort, lay the squat bulk of the brand new ironclad, the C.S.S. Texas, and her escort, the small cottonclad gunboat ram the C.S.S. Little Rebel. With them in their makeshift anchorage were two small British built transports, waiting patiently, if a little uneasily, for the garrison of the fort to board in order to escape the oncoming Union fleet.

The C.S.S. Texas was a brand new and barely finished casemate ironclad of the Columbia type. Her crew was for the most part made up of experienced seamen but the gunners had come from the army and so had to hurriedly gain their sea legs. The whole crew had been working flat out to make the ship ready for action and the recent defeat at Mobile Bay and the loss of her  sister ship, the C.S.S. Tennessee, had only served to accelerate their efforts.

The Union squadron looking to reduce Fort Yuwatus was a powerful and compact force of five ships. The flagship was the U.S.S. Hartford and she was joined by the monitors the U.S.S. Winnebago and the U.S.S. Manhattan, the ironclad the U.S.S. Galena and the small gunboat the U.S.S. Kennebec. It was a potent force and deemed to be more than sufficient to deal with the small rebel fort.

The C.S.S. Texas however, would prove to be a rather unpleasant and unexpected surprise. 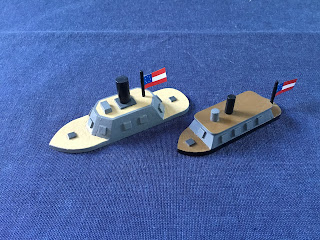 C.S.S. Texas and the C.S.S. Little Rebel. Oh what fun I had making the thrice cursed octagonal casemate….There is no picture of Fort Yuwatus yet as at the time of writing she had only just been undercoated! 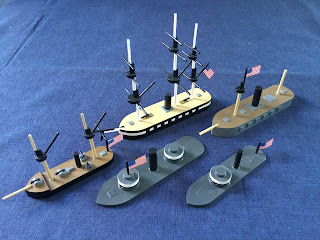 The Union attackers. At the top of the picture is the U.S.S. Hartford flanked by the U.S.S. Galena. The bottom row (left to right) has the U.S.S. Kennebec, the U.S.S. Winnebago and the U.S.S. Manhattan.

* The numbers in brackets after the Flotation Points total shows the split at the Critical Point - e.g. a ship with 9 Flotation Points has a Critical Point at 3 hence the 6/3 split. For Guns the the numbers refer to the number of firing dice that are rolled and the following number is the penetration factor. The letters refer to the firing arcs e.g. F = forward, FW = forward wide, P = Port, S = Starboard, A = aft, AW = aft wide. T = turret.

The Union squadron, with the U.S.S. Kennebec leading, steamed in line ahead approaching the fort from the North West. The plan was a simple one, each ship would sail across the front of the fort, firing all the while, and then circling back to repeat the process as many times as were required to silence the rebel guns. It looked straightforward enough and with no interference expected from the Confederate navy.

Meanwhile, the crew of the C.S.S. Texas made ready to engage the enemy.

To be continued….(I shall be fighting the battle on Easter Monday)

You are a tease! I can hardly wait to read your battle report.

It’s. Something for me to look forward to reading over the Easter weekend.

Watching with interest mate. Keen to see how it all works after the recent revisions.

The fort is under the brush and should be finished tomorrow so Monday will be the battle. The rules are hand written, the board set up and the ship cards ready.

I hope it plays out well and that you enjoy the distraction!

I am rather excited about it though….

Ain’t that the truth!

Looking forward to seeing this battle

I am looking forward to fighting it so tomorrow is a big day as I need to get the fort finished! Monday is when I shall be fighting the action so Part 2 will follow then and I hope you enjoy reading all about it!

I'm looking forward to this one!

I am just adding the finishing touches to the fort - it is stylised and would not win any architectural awards - and so tomorrow will see it in action for the first time. I am rather looking forward to it!