Thoughts on the Jutland Project

With work on the capital ship element of the Jutland project resuming once again (or more accurately speeding up from dead slow) I have again been thinking about the thorny subject of light cruisers and destroyers in the game. There is no doubt that the capital ships will be the stars but the supporting cast must also have their fifteen minutes so to speak.

I have previously mentioned that I will be scaling the numbers down for these elements - in the case of the destroyers this decision has been taken out of necessity as some of the types are simply unavailable in 1/2400th - and have more of less settled on cutting the light cruiser numbers in half. I am undecided about destroyers though.

For a variety of reasons many of the naval games I have fought over the years have usually featured a massed destroyer based torpedo attack. Destroyers then assume an importance in a fleet action out of all proportion to their actual abilities. Of course they are an essential element of a battle fleet but I am unconvinced that many rule sets 'dumb them down' sufficiently when used in large actions. I recall reading that at Jutland a little over a hundred torpedoes were launched in the battle and that the hit ratio was something around the five percent level. This is hardly the great torpedo fest that a wargame would routinely feature!

My feeling is that the threat of a torpedo attack was far greater than the actual effect and so I will aim to factor this in to the rules I ultimately decide upon. The Avalon Hill game Jutland allows for commanders to turn away from a torpedo attack this nullifying it and this works well enough.

Taking all this into consideration I shall be using representative bases for the destroyers based on their actual composition which will cut the number of models down and also ensure that that destroyers are handled with a little finesse than is usual. Torpedoes are effective when they hit - I just do not want that to be too easy to do so.

More to follow and much to ponder methinks....
Posted by David Crook at 06:24 6 comments: 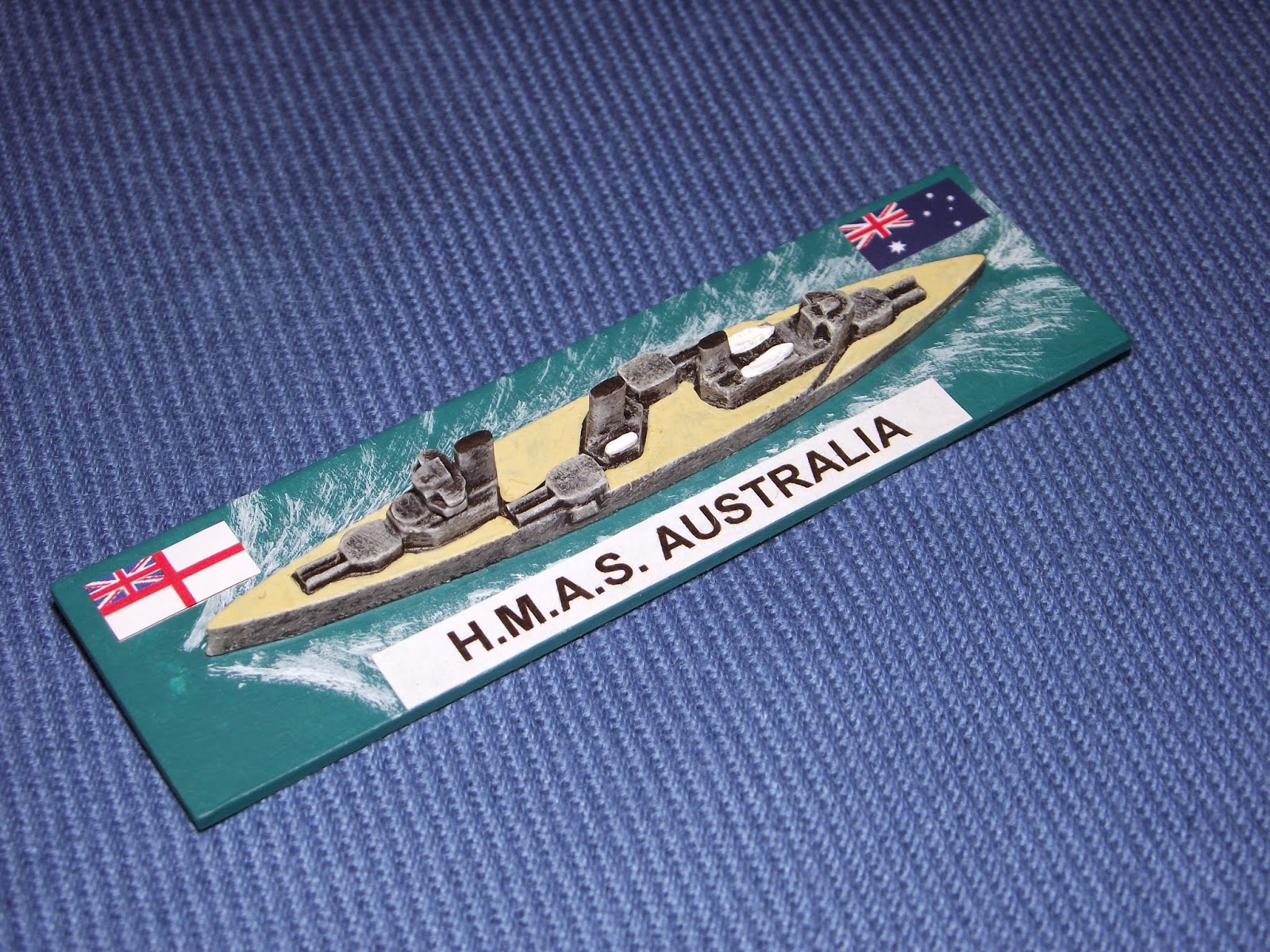 H.M.A.S. Australia in all her 1/2400th glory. She will have a couple of light cruisers and four destroyers for company - just the thing for chasing down German raiders in the Pacific.

After what seems like an age I have finally completed the six early Battle Cruisers for the Royal Navy and that of Australia. Of the two classes - the earlier Invincible and the later Indefatigable - five were present at Jutland (with one from each class being sunk) but I wanted H.M.A.S Australia for my small Antipodean squadron that will be serving in a planned Pacific based 'hunt the raider' type scenario. A potted history of her career can be found here - H.M.A.S. Australia 1911 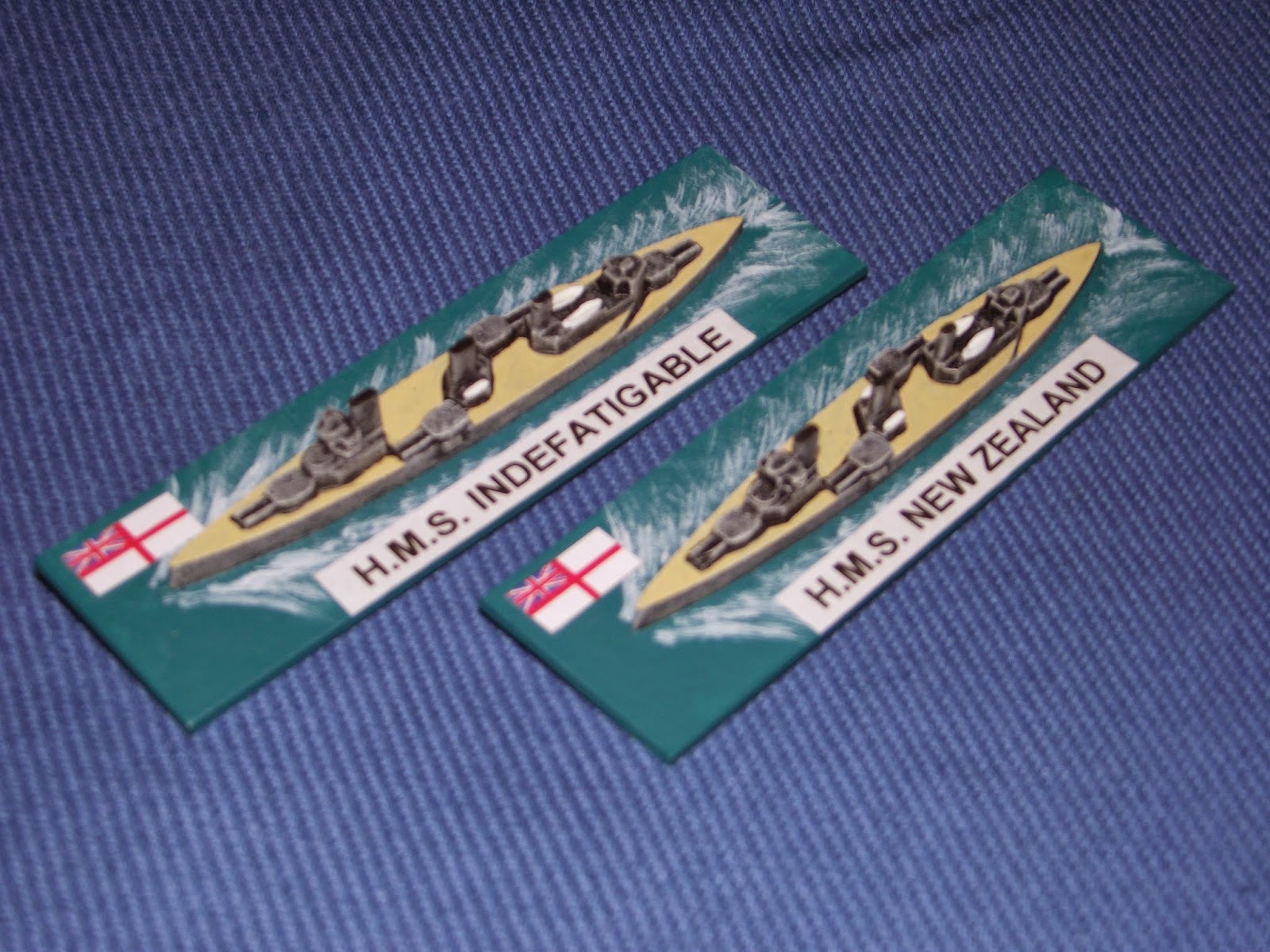 The other two ships in the class - with apologies for the ever-so-slightly blurred picture. 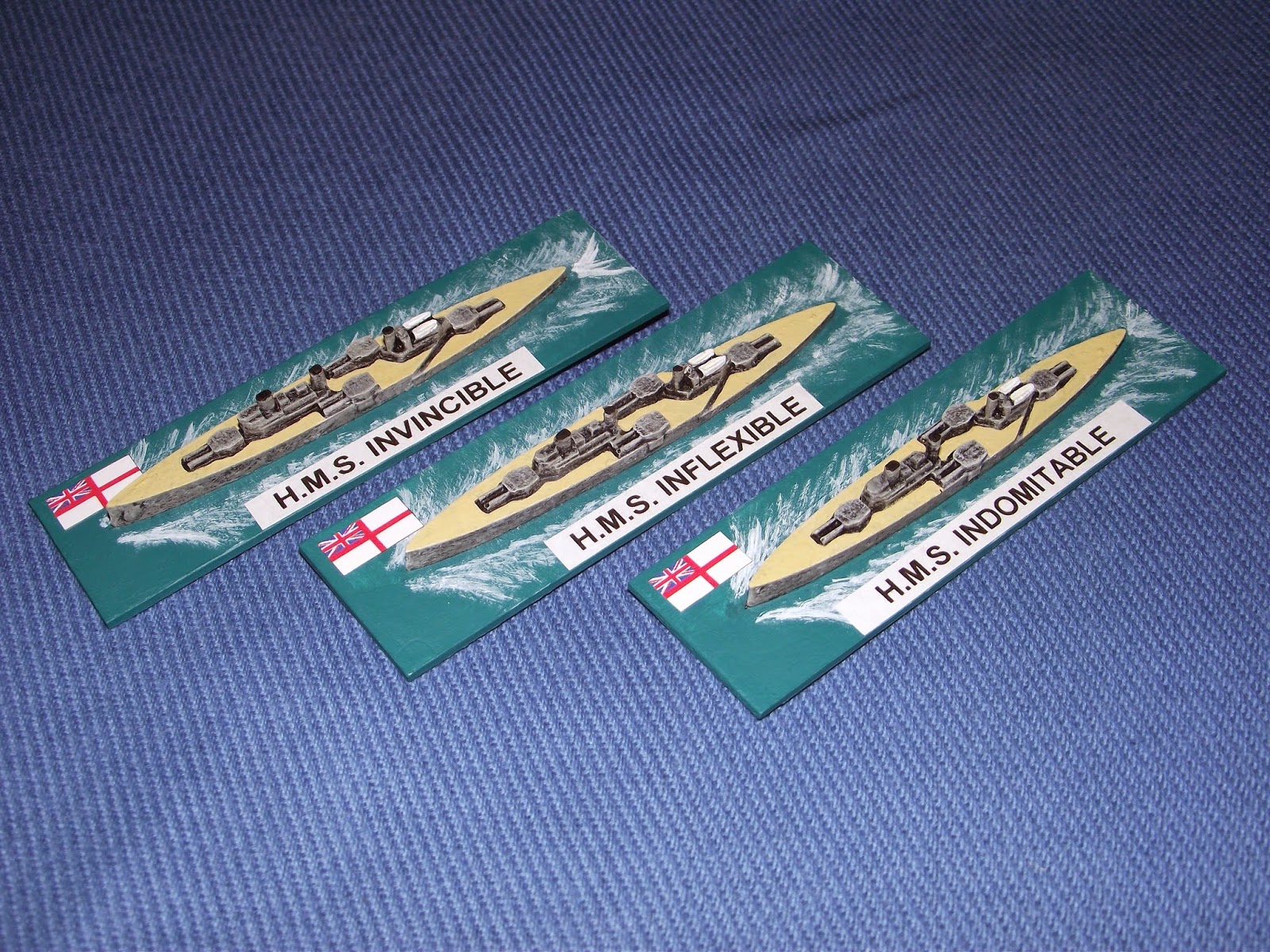 The earlier Invincible class. The Indefatigable class was not a great improvement over these ships - it was only when the Lion type came along was any real advance in the battle cruiser concept from the Royal Navy perspective. 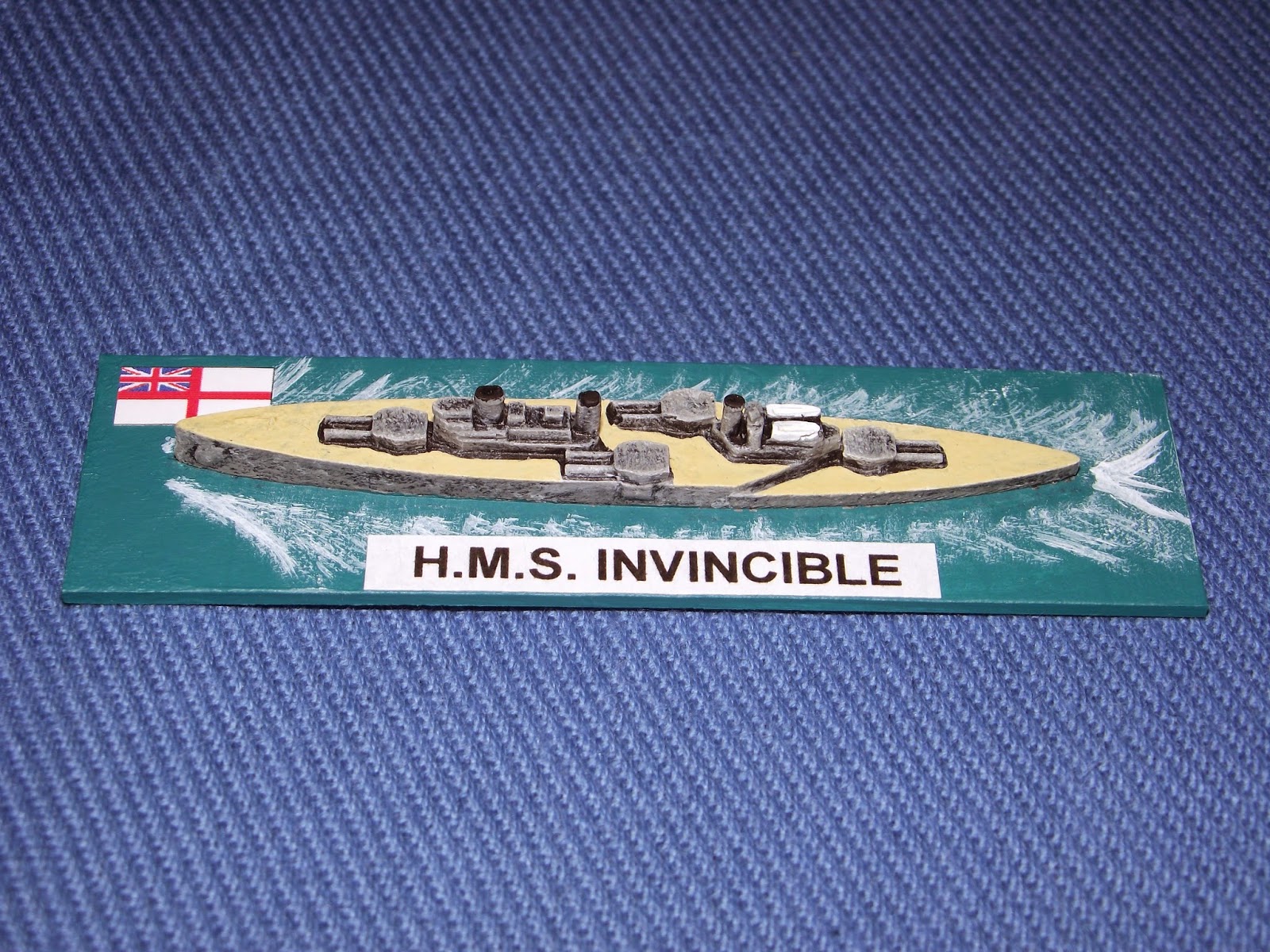 H.M.S. Invincible - lead ship of the class and lost at Jutland. 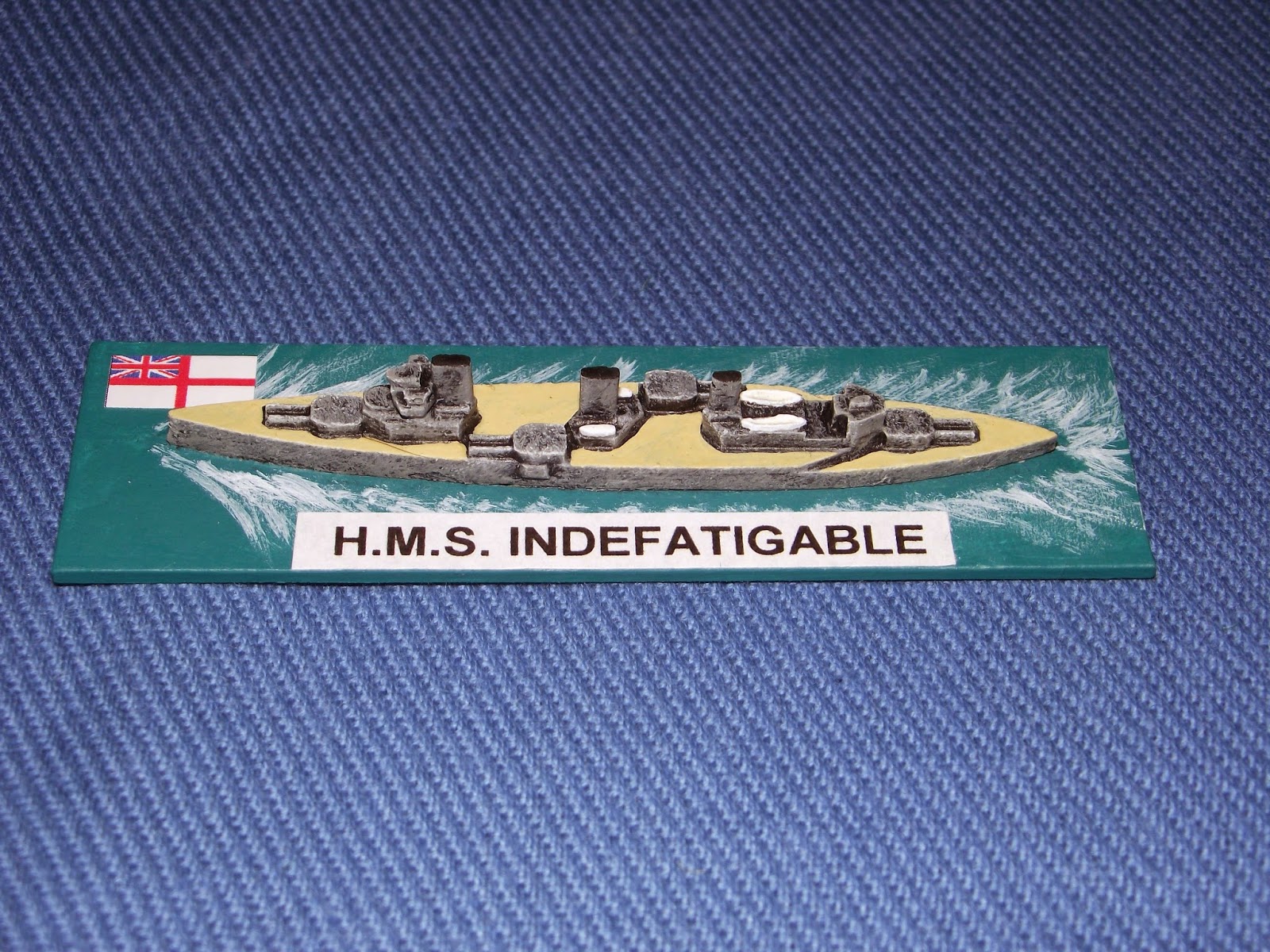 H.M.S. Indefatigable - lead ship of the class and lost at Jutland. 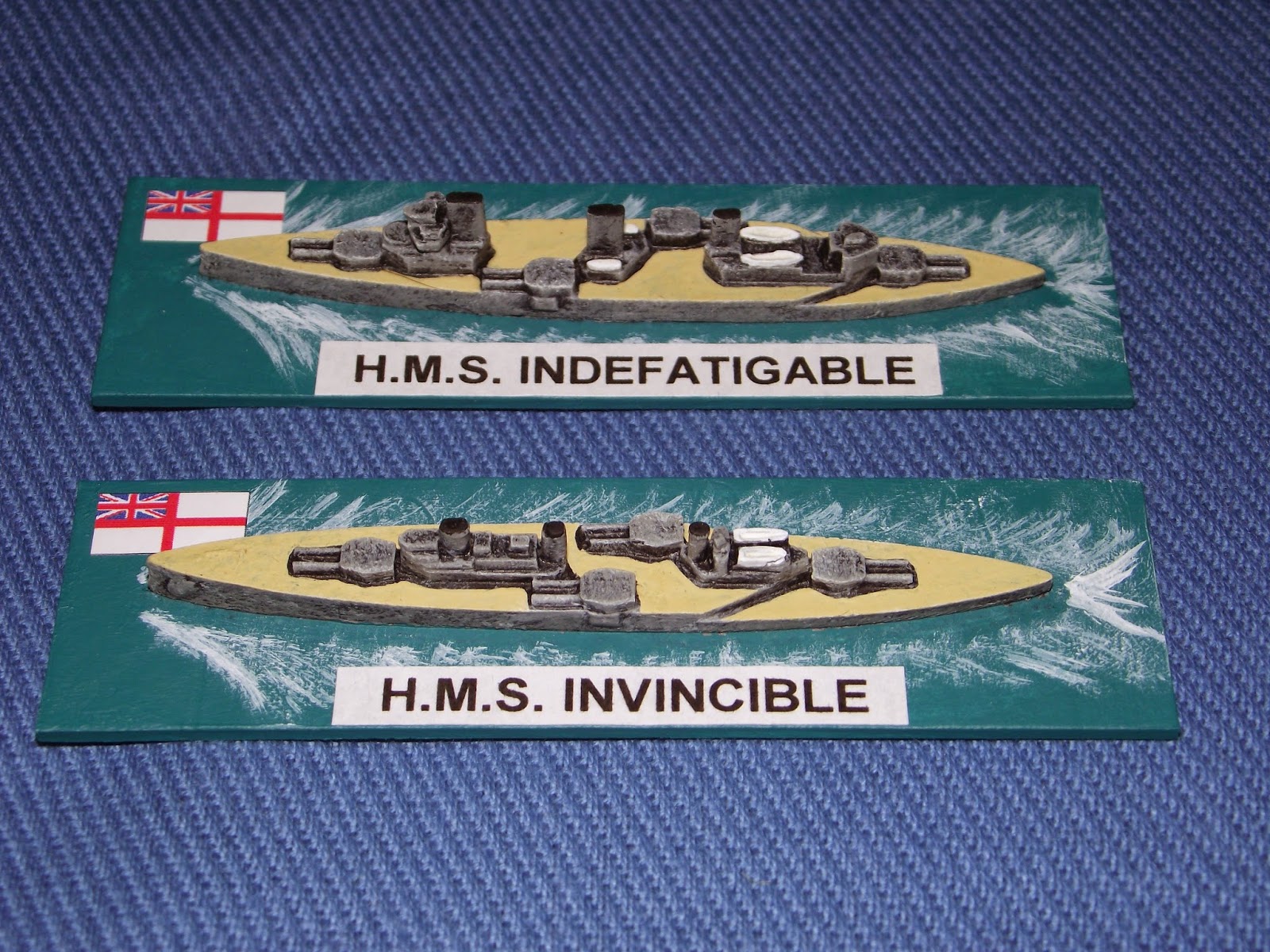 The two lead ships from each class for comparison purposes.

The six models are from Panzerschiffe in the US and, if I am honest, are fairly basic even by their standards. I suspect that these are old molds and the presence of some odd pieces of flash and sink holes would tend to confirm this. The rear funnels on the Indefatigable class is a little odd on a couple of the models and is canted over slightly. There is also the curse of the partially cast gun barrel in evidence. Panzerschiffe are happy to exchange models that are not up to standard due to casting problems but if I am honest the hassle of organising transatlantic replacements is not worth it as they are not that bad and have painted up well enough.

I used my usual black undercoat and dry brush in various shades of grey with block painted decks and lifeboats. All were finished in enamels except for the ship's lifeboats which are in white Vallejo acrylic.

As an aside I was really impressed with the Vallejo paint and intend a phased conversion to using them for all my painting going forward - how about that for dragging my painting into the 21st century at long last?!

I now have 14 capital ships remaining for the RN and 13 for the Germans before I tackle the cruisers and destroyers. The next batch of the RN ships (8 in total) are now under way and have had the preliminary grey dry brushing so I am hoping to get them completed over the coming week. 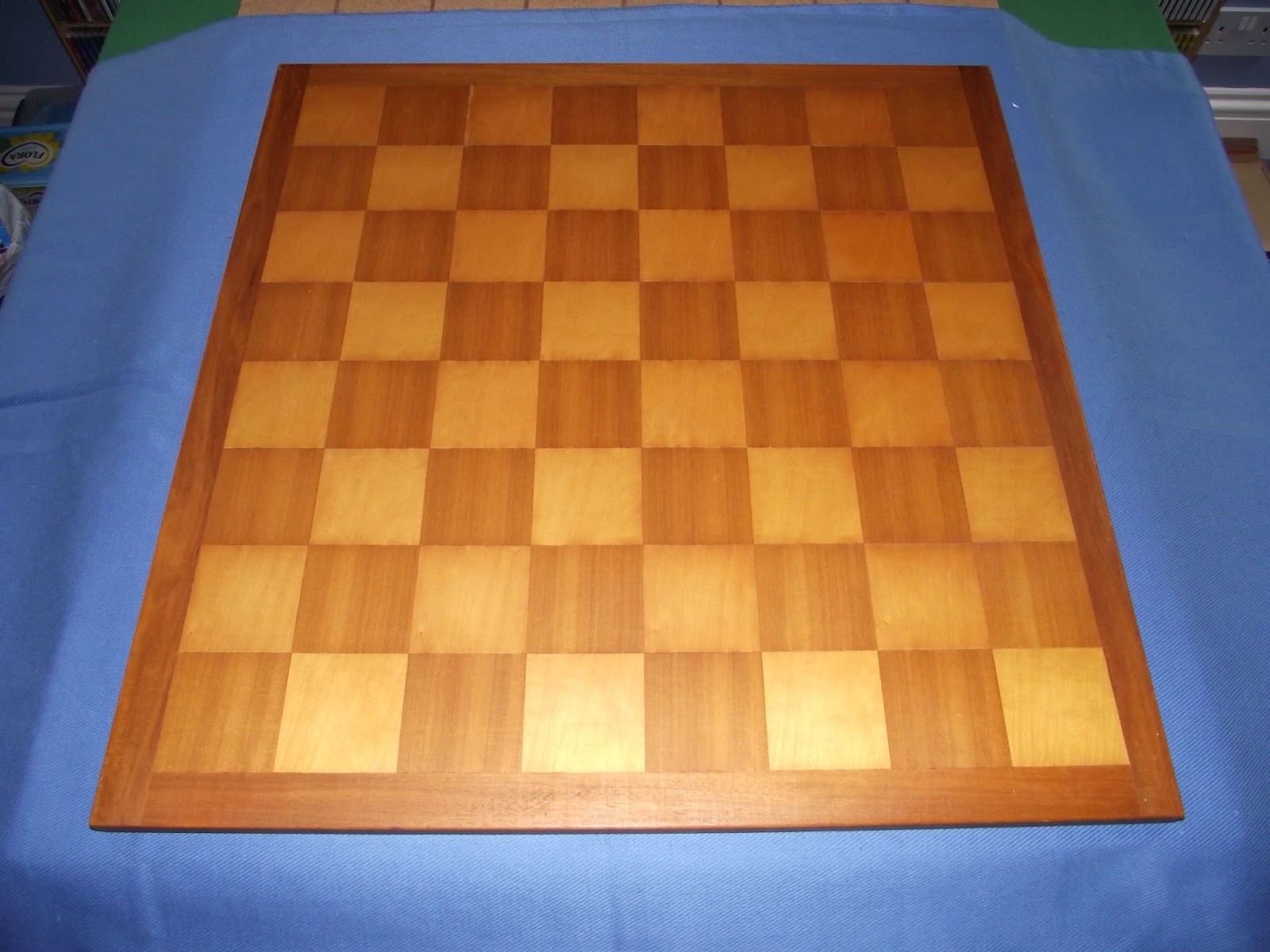 Rather nice and well made - I may even play chess on it.... 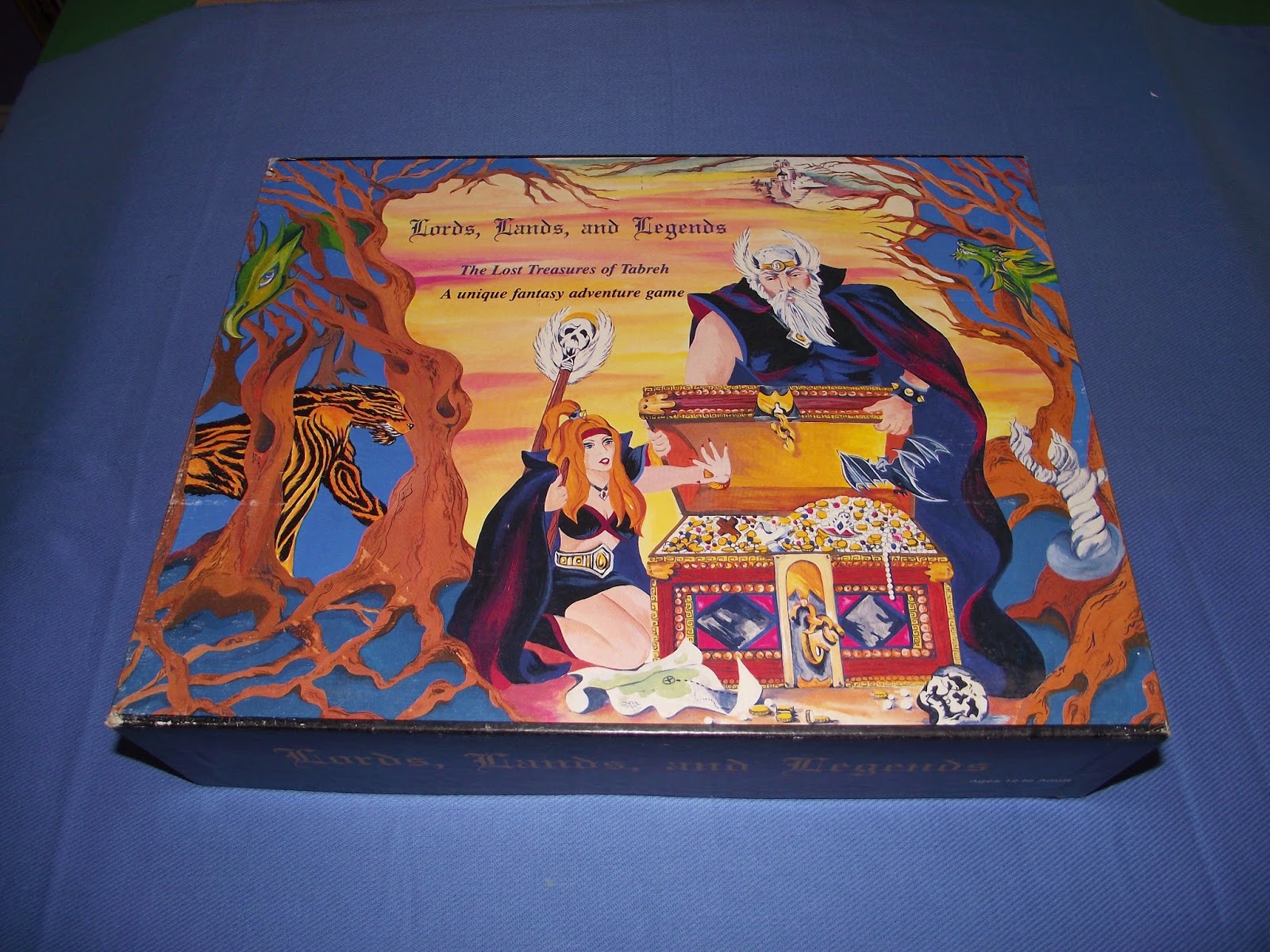 A very simple looking game by a company I have never heard of.... 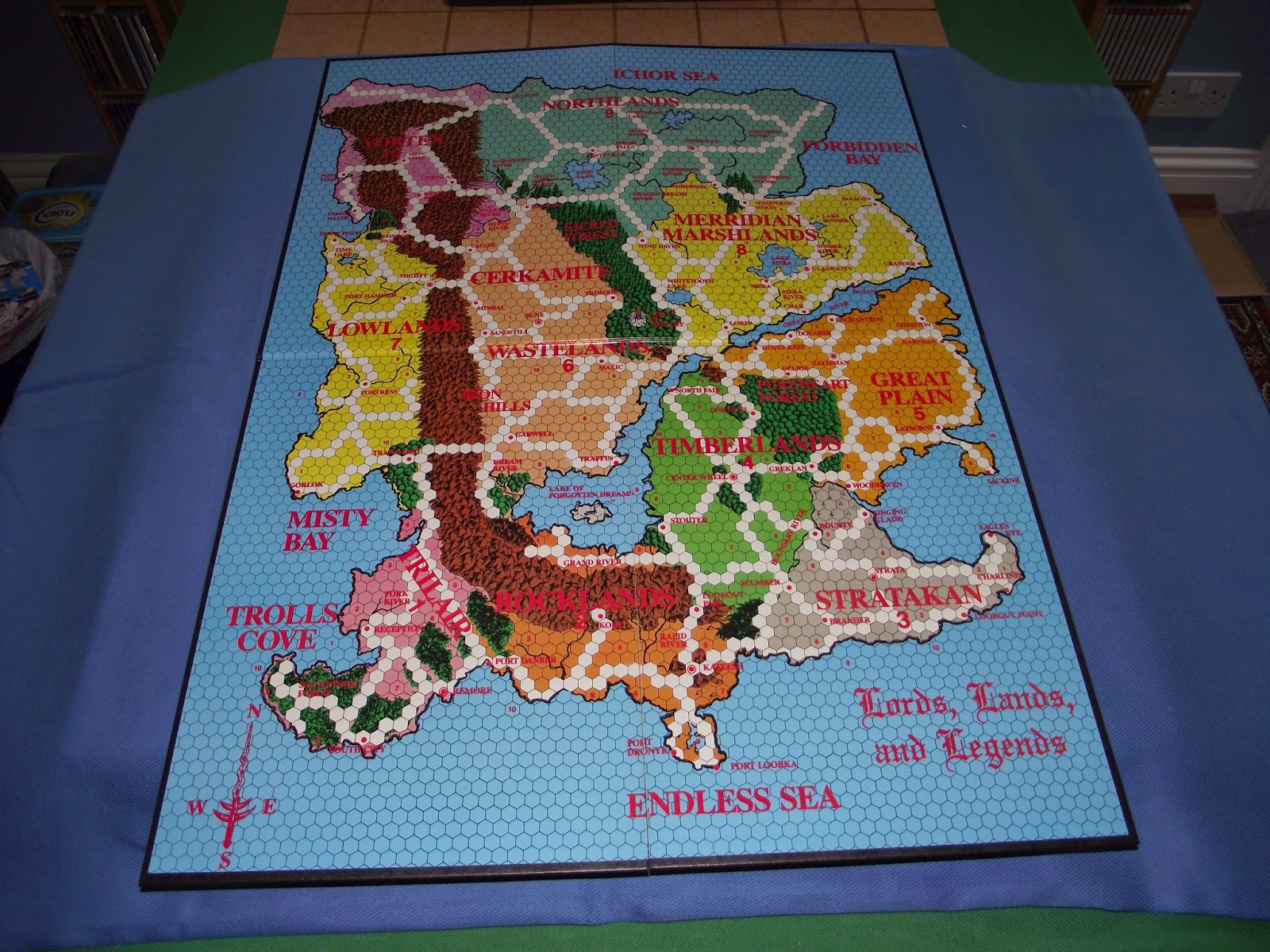 ....but take a look at the map! Instant imagi-nation if ever I saw one! It was also very good value at a mere 75p.

On a separate subject the outdoor boot sale season is winding down but we have a local indoor version that whilst being small has turned up a couple of goodies over the years. Today was no exception as I picked up a rather useful chess board with 6cm squares and a rather handy board game. the chess board will be seeing service for a number of Portable Wargame type ideas and the board game has a very nice hex based mounted map of a fantasy style world. No prizes for guessing what that may be used for!
Posted by David Crook at 17:19 8 comments:

My word how time flies! Since my last post on 28/09 a few things have been on the go but it has been largely underwhelming on the gaming front - much planning and thinking of great thoughts has been the order of the day - with little else to show for it. 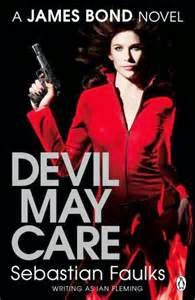 Not a bad read - although even for me it is a little cliche-ridden!

I have been extensively gaming albeit in a rather unusual fashion. One of the chaps at the office introduced me to a very good Chess 'app' - Chess with Friends by Zynga - and I have been playing him relentlessly for some time now. I expect most gamers have (or are still playing) played Chess at some point and there are obvious war game connections. It as been challenging and a good work out for the grey matter - so much so that I dusted off a couple of Chess books I have in the collection - so in the absence of a wargame will suffice for my gaming fix for the time being.

I allowed myself the luxury of reading Sebastien Faulks James Bond novel - Devil May Care - and have to say that whilst I enjoyed it (being a huge Bond fan) it did seem to almost catalogue elements of every Bond story written - even using much of the same phraseology - which did grate after a while. It is a good story though and I would recommend it.

The '4, 3, 2' of the title is a reference to the way I shall be organising my 10/12mm collections and represents the ratio of foot to horse to guns I shall be using. I have opted to use 4 bases for infantry, 3 for cavalry and 2 for artillery - which is of course the system in use for pretty much all the Command and Colours system.

I have also been thinking about my ancients 'fix'. If you recall I posted on many occasions about the Greek and Persian war - culminating in Salamis as the naval option. Whilst I like the idea to tackling the armies using figures it is becoming less likely that I will. I have a couple of ideas in mind - the second Punic War for one - but I am having some serious thoughts about the wars of the late Roman Republic - the century leading up to AD. The reasons are compelling - multiple opponents ranging from the usual Celtic and Germanic hordes via Eastern armies and a whole host in between, not to mention the civil war(s). As ever, 10/12mm will be the scale of choice.

I have been pondering the whole Lion Rampant/Cross and Crescent idea and am looking to the El Cid period although the Perry late medieval plastic look really nice....;-)

No progress on the ships sadly although I have all that I need from the capital ship perspective. Time and enthusiasm have been a premium recently but I shall persevere.