Military Map Symbols and the Changing of the Block 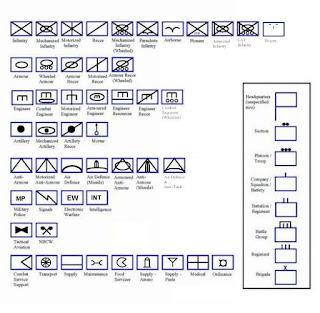 An example of NATO style military map symbols. The basic system is very flexible and allows for designing custom units as required. 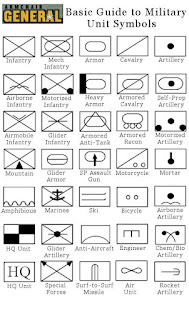 A simpler guide produced by the Armchair General

Originally my block collection was going to be limited solely to the traditional horse and musket period - roughly 1700 to 1900. As a result my blocks were quite simple in design as the units to be represented were confined to horse, foot and guns. I borrowed the design for what I use as a command block from David Chandler's book the Campaigns of Napoleon. The sole customisation I have used for the original set is to differentiate between 'heavy' and 'light' types by the addition of a black or white band across the bottom edge of the block label when viewed from above. If I am honest I am now thinking that I did not really need to do this as leaving the blocks as per their original design an element of the fog of war is introduced as the opposition will not know what troops they are facing unless they recce or attack the unit in question. 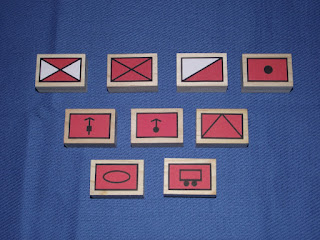 The block in the top left corner is my default command block based on The Campaigns of Napoleon by David Chandler. The mortar and machine gun block (middle row left and centre) will need changing slightly and the armour block (bottom left) will have the track symbol flattened out slightly.

Where the issue gets a little more complex is when you get to the modern period. The bewildering variety of troop types that make up a modern army - and by modern I mean from WW2 onwards - means that a lot more labels will be needed. For my own collection I have cheated slightly in that I have not created a label for every troop type. A unit of armoured infantry for example would be represented by three blocks - two normal infantry and an armour block. Similarly a tank destroyer or a self propelled artillery unit would consist of an anti tank gun or artillery block deployed with an armour block. This works reasonably well but as I am looking to expand the blocks on a more systemic basis I will need to incorporate newer types on a more formal basis.

At this stage the first order of business will be to identify where the gaps are in the existing collection are and then to set about designing the new labels. There are also some existing types that will need modifying in order to align them to the style I shall be using going forward.

I have sets of blocks in six colours with the brown, grey and olive set being primarily for the modern era although the grey set also serves as Confederates for the ACW. My plan is to expand these three colours to better reflect the modern era whilst the red, green and blue sets will have those modern blocks reused. In effect I will have what I like to call a mechanised set of blocks and also a horse and musket set with the latter also being useful for earlier periods.