My Terrain of Thought

One of the objectives that I set out to achieve whilst using my block armies is that the resultant games should look as close to a 'traditional' wargame as possible. I was keen to move away from the 'map and counter' style of board games but realised very early on that using detailed model scenery in conjunction with the blocks did not look right. What was needed then, was a more stylised approach. 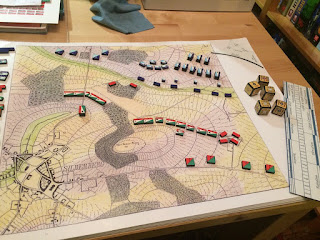 Kriegsspiel 1824. Note the very detailed map in use.

Most of the games I have fought using the block armies have made use of some very basic and simple pieces of terrain. Buildings are usually from the Town in a Bag range or from my collection of Greek souvenir ceramic houses. I have a number of rather crude hills - cobbled together quickly and due to be replaced with something a little more suitable in due course - and for roads and rivers I use pieces of felt cut to size. I picked up a bag of 50 assorted trees off  EBay which look pretty good although the bases I used for them are rather large. I have yet to use any fields although making them is easy enough. 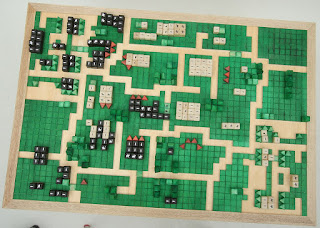 A version of the Hellwig chess inspired wargame from around 1780. The game was based originally on chess but was developed into what you see above.  The terrain would be arranged as required. By all accounts it was very popular.

Going forward I shall be persevering with the buildings but I shall be doing something a little more detailed in respect of roads, rivers and hills. I have always liked step hills so will look to organise some of these as well as road and river sections. Depending on what is available commercially I will probably buy these and am thinking that 1:300th would be a good place to start. I will also be rethinking trees as my own are a real mish-mash of types. 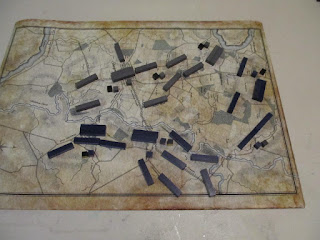 Command Post Games in the US produce a number of map based block wargames using reproductions of actual maps of the battles themselves.

I am not averse to using printed maps with the blocks and indeed, using them really puts one in mind of a commander poring over a map plotting the downfall of his enemy, but there are a few problems in my mind. Large maps are unwieldy and limited to the area they cover. Hand drawn maps are easy enough to produce - I have done this in the past many times - but again will be quite specific to the area covered unless of course they are fictional. Maps may have a certain degree of flexibility in that they can be geomorphic to an extent and certainly the Axis and Allies versions I have used are useful in this respect. However, for my needs the use of traditional wargames terrain will be the way forward. 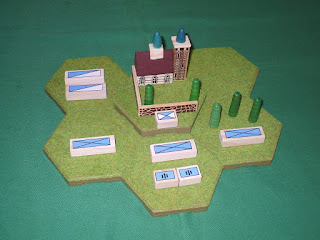 Simple and effective - the church, walls and trees from the Town in a Bag set.

I do like the of the printed maps but as you say they come with problems!

My own feeling is that if you are going to use a map you may as well buy a good board game on the subject. I want the end result to look like and play like a war game. The only difference is using blocks.

Very interesting! I;ve never actually scene a photograph of the Hellwig set-up. While I am partial to the original 1824 kriegspiel layout, you are right about simplfying things somewhat with a more stylized playing surface. To that end, your layout as shown the final picture looks ideal. The small wooden 1/300th buildings and trees give everything a very pleasing appearance. Were I to give blocks a shot myself, this is the way I'd go. Eager to see your project develop.

Sadly not mine but as you rightly say it would be an interesting project to try. I would be interested to see what the rules for this were like - would you know if they are available anywhere?

I have nothing against the 1824 Kriegspiel layout but for what I am planning it would be a little on the restrictive side. I think that the degree of stylisation I am planning with tie in with the blocks nicely so your comment has been well appreciated! Terrain considerations for my particular set up will evolve over the next year and will feature in my book.

I like the Hellwig set and it would be something very different to try in due course.

David, I too like your final approach and look forward to what you develop. The Hellwig game does demonstrate to me that the more squares/hexes on the battlefield, the better. I love the Portable Wargame rules, but feel the 8 X 8 or 9 X 9 battlefield is a bit restrictive to my battles.

The Hellwig game has been recreated at a German university some years ago, if I'm not mistaken. Boardgamegeek has an entry on the Hellwig wargame, and some links.

I have some vague plans of building a Hellwig setup using 3D printing or lasercut pieces, but I guess it will have to wait till retirment :-)

I usually use Bob’s rules on a 12 x 8 grid although I have fought on an 8 x 8 before. The smaller size tends to work best with around a dozen or so units in total.

I am intrigued by the Hellwig game and intend looking a little more closely at it in due course.

I am hoping to get a number of ideas together for my book about wargaming using block armies so there should be some good stuff for you to explore!

Many thanks for the link re the Hellwig game - I shall certainly be taking a look at them.

Using 3D printing is a good idea for this type of thing and so I am sure this would work well.

I will through this into the mix:

I will take your blocks but only until they reveal themselves and change into figures ;)

Fog of War ;)
Something to discuss over a pint at CoW 2019 perhaps

Blocks for figures? In my case it is the other way around as figures for me are so last year....

Seriously though, I freely concede that it will not suit everyone but then again, would painting up Spencer Smith ACW figures using Kurz and Allison as a uniform reference?

I shall look forward to the pint!