It was a fairly quiet week for me with a lot of gaming related stuff going on 'behind the scenes' so to speak. I have a couple of pretty exciting things on the go that will be revealed in due course once details have been finalised. Suffice it to say that blocks are involved in some way as is the collection of Eric Knowles. I will also throw in Warlord Games Cruel Seas just for the sheer hell of it! 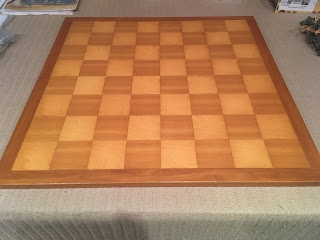 6cm squares and cost me £1 as I recall. the only thing I have done with it is to glue a corner of one of the squares that had lifted slightly. I like the colours used as they will suit the desert quite nicely.

One of the things I have been looking at long and hard is the homemade chess board I picked up from a boot sale some time ago. the squares are 6cm across which makes it very handy for use for the Portable Wargame with smaller scale models or, in my case, the block armies. I have plenty of terrain I can use with this although I will need to make some hills which I may tackle over the Christmas break.

The biggest news for me this week can be found over at the blog of Bob Cordery. I am really excited about this and am looking forward to when the book will be published. With all of Bob's Portable Wargame series - there will be more to come in the future as well - the big advantage is that the rules have a common core system that seems to take any amount of tinkering and still work. Ironically I am looking at the Portable Napoleonic Wargame for pretty much anything other than the wars of the Corsican Ogre with the ACW being at the forefront for the Kurz and Allison project.

It may not have escaped your notice that mention of the 1:4800th WW2 North Atlantic has been conspicuous by its absence recently. this is intentional and for reasons that will come to light in due course.

In the meantime though here are a few pictures of the WW2 collection of Eric Knowles featuring 1940 Belgians in 20mm. 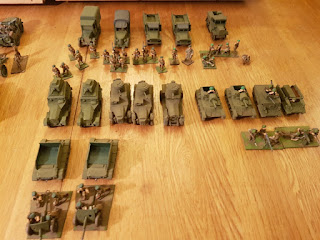 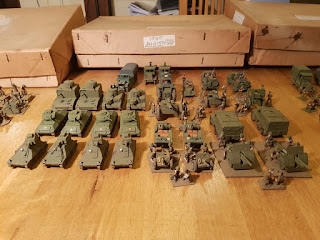 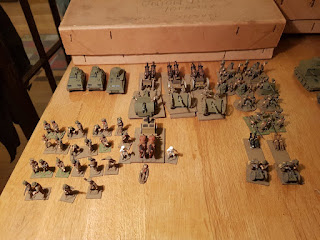 This is just the support stuff - the infantry are still in their boxes. Bill has mentioned that Eric's WW2 collection is probably as large as his 18th century set up, if not larger....

The collection contains some of Eric's wonderfully imaginative conversions/repurposing of off-the-shelf model vehicles. I recognise some post-war German AFVs with new superstructures and turrets that make them look completely different.