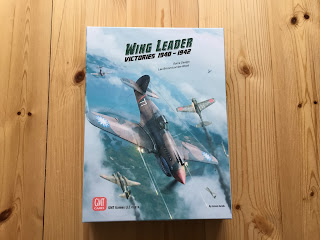 On a wing and a prayer….

I have been a fan of aerial wargames for many years although primarily via the medium of the board game. Without exception these have been plane to plane based games as have the few forays I have made into using miniatures. I have tried and owned models for Wings of Glory (WW1) and Angels 20 (WW2) and have often thought about using 1:600th models but aside from buying a few packs from Tumbling Dice (which were inevitably sold on as the enthusiasm waned) I never really pursued it.

I mentioned that virtually all the aerial games I have played have focussed on plane to plane combat which is fine and works very nicely indeed. I have taken part in some cracking games at this level however I have always fancied tackling aerial combat at a higher level (no pun intended, oh well then, if you insist). I rather liked the idea of massed bomber raids with squadrons being deployed rather then the usual solution of calling a dozen aircraft a bomber stream. The Wing Leader series of board games allows you to do exactly that. 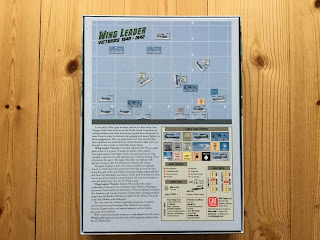 I had an eye on this for some time but for one reason or another it passed me by which, as events turned out, was probably a good thing as the second edition had rather a lot of revisions from the first including the aircraft data cards. Anyway, a chap on one the Facebook groups I use was selling a copy of the second edition Wing Leader: Victories which covers the years 1940 to 1942 in what proved to be pristine condition. The counters were punched with the corners clipped and everything was neatly bagged and sorted. It was at a price I could not refuse and was delighted when it arrived, just before Laurel went into hospital. 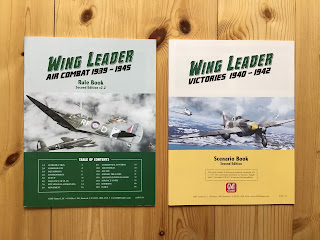 The production quality is really good although I was disappointed with the paper map playing surface - I have a pathological aversion to these so will see about getting a rather more durable alternative - but understand that the follow up game, Wing Leader: Supremacy covering the later war period has a mounted map board so when I get around to getting a copy (and don’t worry - I certainly shall be!) It will serve for both games. 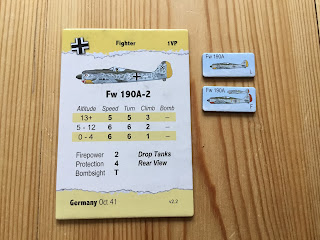 An example aircraft card and two types of counters - flights at the top and a squadron underneath. The fact that this is one of favourite WW2 German aircraft has nothing to do with the selection of this type for the picture….

The game uses a square grid and the aircraft are deployed on a side profile basis. The edge of the map is the ground/sea and height goes up in 1,000 foot increments. Both players sit on the same side of the playing area. All the usual stuff you would expect in an aerial game is included - height advantage, sun position, clouds, flak, targets etc - but with a higher level emphasis for command. The smallest unit is a flight represented by a single aircraft picture whilst the two image counters are for squadrons. There is allowances for fighter doctrine - tight or loose, radio nets and ground control.

I am really looking forward to giving this spin and there is no shortage of aircraft types for me to play around with for the early war period as well as very nice selection of scenarios ranging from the Battle of France and Britain through to Stalingrad airlifts, Flying Tigers, Malta, the Pacific and the desert.

I am going to really enjoy this but first of all it is back to the hospital!

If you use the paper map under a perspex/acrylic sheet you might find the alternative cloud and rain markers (which fill a square) preferable to the counters included. These are in the files section on Boardgamegeek.

I grew disenchanted with aerial games a few years back since I find they are one of the few game genres better done on computer. With that said this side on system looks very interesting and I hope you’ll take us through a couple of games on the blog when the missus is back home and on the mend.

This does look very interesting David and much more to my liking than a few planes flying about. I may just have to check this out, purely for research purposes of course!

I really enjoy the Wing Leader series. I think of it as "Grand Tactical" air gaming.

Because I have limited space to leave games set up, I've ended up using VASSAL to set up, play, and save games. The modules are updated with all the aircraft, but you still have to set up the scenarios.

Interesting, I will be fascinated to see how you get on. I have this game too and have shamefully not done much with it, but I love the concept and the obvious influence of Mike Spick's book from years ago, which was a highlight of my early wargaming! I feel a nostalgic blog post coming on.. Hope all going well for your wife!

These are both cracking suggestions that I will certainly explore so thank you both. I have already been thinking about using the aircraft stats for something more plane to plane using models but this is in idea form only for the present and likely to remain so for a while.

Back in the day I used to play Air Force and Dauntless extensively and whilst I own all the data cards and rules, charts and tables etc I doubt very much if I would do so today simply because the system now seems a little overblown. Angels 20 is great fun and a good excuse to push some 15mm aircraft around but is very much a game with model aircraft rather than a detailed simulation. In both cases plane to plane is the focus of the games.

I have wanted to model games on a larger level so that whole squadrons etc were used and were manageable. Wing Leader does just that and the scenarios reflect the higher level type of operation. I will certainly be giving it a spin as soon as I have gotten my head around the rules and caught a few YouTube ‘how to’ videos. Needless to say these will feature on the blog!

“Purely for research purposes?’ - where have I heard that before? Usually when the debit/credit card is dragged screaming and kicking from its wallet!

It does look really good though.

I really need to take a look at Vassal at some point as there is heaps of stuff on there I would enjoy. The trouble is I know I would then end up spending hours of my life poring over a screen - which I do for a living in any event!

Worth a look though methinks but I would need to be disciplined (Yeah right!).

That was my first thought - the Mick Spick book! I have done and awful lot of plane to plane stuff over the years - which is great fun and certainly something I will continue to do - but really wanted to go to the next level of operations.

Here are those useful markers - https://boardgamegeek.com/filepage/120583/wing-leader-terrain-tiles-clouds-and-flak

I've always felt that there's scope for a WW1 game that focuses on groups of aircraft rather than individual dogfights.

That would be something to see! Bloody April and Black September would be great to tackle on that basis.