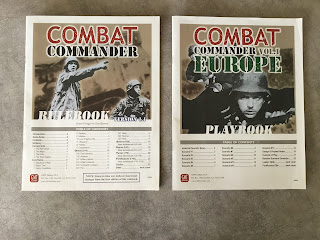 Guess what I shall be reading later then?

Yesterday saw the arrival of my previously mentioned copy of Combat Commander: Europe published by GMT Games and the core set for the system. I am hugely excited about this game and am looking forward to getting it on to the table at some point - everything is currently classed as being ‘at some point’ for a variety of reasons! The game covers infantry combat during WW2 and it has a very ‘Squad Leader with Command Cards’ feel about it. A number of things struck me as I opened the box. 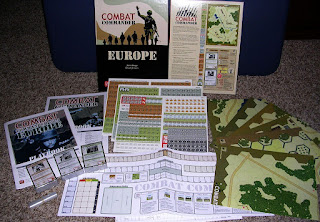 The contents of the box although not my copy!

1. Counters - as far as I can tell all are present and correct but there are two things about them. Firstly, they have been punched out by hand so will need to have the cardboard ‘tufts’ removed. I do not clip counters but I prefer them to be tidy around the edges so an evening session with a scalpel will be in order. They look the part bur are quite thin which I was surprised at given the quality of the counters in Wing Leader: Victories.

2. Maps - these are really nice and I will post pictures of them all in due course. There are six double sided maps showing a good variety of terrain types to fight over. They are printed on paper which will need either Perspex on top or laminating although the latter does create a storage challenge.

3. Rules and Playbook - the former is surprisingly thin (24 pages in all of which around 18 are the rules themselves and even then a substantial chunk is all about explanations of orders, actions, events etc) whilst the latter includes the 12 core scenarios, the all important designer’s notes, a random scenario generator and a reference of leaders and fortifications.

The game itself looks excellent but aside from the three fate decks - German, Russian and American ‘command’ cards - I have to say I am slightly underwhelmed by the production quality of the components. Never mind, they will do the job though!

Pretty much most of the blog posts I write have been drafted on my trusty iPad in conjunction with a Logitech Bluetooth keyboard case. This turns the tablet into a ‘not quite but close enough’ laptop. I first acquired one of these several years ago with my first iPad and basically wore them both out. When I upgraded to my current iPad (with 128Gb) I also purchased another Logitech keyboard. It worked perfectly well but a couple of years ago I chipped a small piece off the plastic surround that the tablet sits in. This had no effect on the use of the keyboard - it was merely a minor cosmetic issue.

My son had noticed this and so purchased me a replacement for Father’s Day (he is a good lad when all is said and done) and so the older keyboard, though still perfectly serviceable, was decommissioned in favour of the newer model.

In many ways the newer model was actually not as good as the original - with the newer version the tablet had a tendency to ‘pop’ out of the plastic holding surround, usually at the most inconvenient moments - and it also felt as though the case was too large for the model of iPad I own (it is fact the correct size). Anyway, to cut a long story short this newer case also repeated the chipping incident of the original one. I was not unduly concerned about this until last night when one of the keys decided to part company with the keyboard. Try as I might I was unable to fix this as one of the connections had broken off. 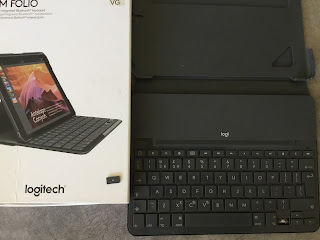 The old new keyboard now replaced with the older old keyboard. You can see the small chip on the right hand side at the top and the broken key

You can probably guess what I did next. Yup! I got my old keyboard out of storage, cleaned it up, popped in a couple of news batteries and let Bluetooth do its connecting thing and hey presto! I now have working keyboard that the tablet fits rather more snuggly in, with all the keys in place and a chip that is smaller than the one on the new case.

Big day today. Laurel and I are meeting with the physio, an occupational therapist, a nurse and a pathway coordinator (another nurse) to review Laurel’s progress so far and to get a more formal plan in place for her next steps. It also means that I will be allowed into the building and will able to spend some time actually in the same room with her - none of that lurking in the bushes stuff!

In order to prepare for this I had to go around the house measuring and taking pictures of any steps, doorframes, bathrooms, toilets, beds and chairs. It took a whole morning to do this and if I have learned anything it is just how challenging our house would be for anyone suffering from mobility issues.

I am hoping that the meeting today will address the concerns we have and what needs to happen next - my feeling is that at the present time and given Laurel’s current rate of progress - she is improving everyday but probably not enough to be allowed home - is that she may be an in patient for a while yet.

may I wish Laurel a speedy recovery and be able come home sometime.

I purchased Combat Commander Pacific game several years. I was impressed by the rules, the system and the game maps with the big hexes. Unfortunately my main opponent didn't care for the game.

Thank you kindly sir - much appreciated! There is a fair amount of ground to cover before she comes home but at least now we have a plan in place.

I am really tempted by Combat Commander Pacific so may well have a dabble at some point.

Glad to hear you’ve been promoted from Chief Lurker 😁

Must be a relief to actually be in the same room as Laurel. 🤞

Good to hear you are all doing well
Best Wishes to you and your family
:)

Great that you were finally able to meet up in person with Laurel after so long, rather than chatting through barely open windows. Fingers crossed she can come home soon, once everything is in place for her.

It was rather harrowing negotiating a particularly hostile rose bush!

Sadly this will be a one off until at least Tuesday - the governing trust still has a no visitors policy - and was only granted as I was in attendance for the meeting. I was able to spend some 3 1/2 hours with Laurel which helped her (and me!) enormously.

Back to the window today though, assuming the wind permits!

Cheers old chap! It was good to be in the same room again, albeit temporarily.

Still early days but as each one goes by Laurel gets stronger and so the amount of after care etc reduces accordingly.

I can’t imagine that a window visit would be very comfortable with the weather we are having….
Maybe someone could set up a little tea van near by…😁

It certainly was an interesting experience clambering through a hedge and fighting against 90 mph winds!

Not sure about a tea van but I reckon a flask might be an idea!

Combat Commander .. you are heading to places I want to go