“I Can Resist Everything….Except Temptation!”…. 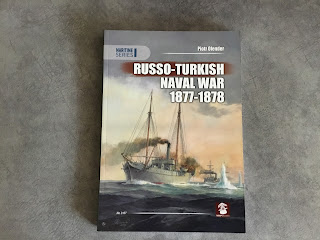 The attack of Covid appears to be relenting somewhat although I (and my my daughter) are still testing positive. She seems to be suffering rather more than I am so it is just a case of maintaining the fluids and paracetamol intake to cope and waiting it out.

Laurel met with her consultant today and he was the bearer of some welcome good news. Her tumour is benign (he suspected as such but it is always good to have it confirmed) and he is really pleased with her progress. The loss of feeling etc is perfectly normal and so he has put her on a course of steroids for a few days to help with the internal swelling and therefore speeding up its return. We have also heard that she has a bed in a residential rehab facility located about 15 minutes from where we live which is really good news and will help further with her recovery.

All in all then, progress is being made.

After having spent some time yesterday sorting bits and pieces out in the man cave - the previous Battle of Britain post was a result of this - I once again looked long and hard at the ACW ships and what I need to do to finish them. It was then that I realised that the Warbases order I am waiting for is rather more essential than I originally envisaged. I have made a schoolboy error with this current batch in that it is rather larger than I usually work with - 13 models rather than 3 or 4 at a time - and although I have previously said I would split them up into batches due to the material shortages Warbases are currently rectifying, I am currently unable to complete any of the three sets. Having split them into types I am loath to reorganise them again just so as I get on with building so my eye fell upon the 4 hulls of the Turkish ships I want to build for the Russo Turkish War. Now these I can build as all the material has been amassed and in truth, they would make a welcome change.

I then compounded my schoolboy error by taking the book depicted at the head of this post off the shelf and opening it. I was suddenly struck by the realisation that many of the Russian ships would be pretty straightforward to build (circular gunboats notwithstanding) and in fact, some of the ACW hulls currently under construction could even be repurposed if required (I quickly dampened that idea down). The Russians would need a selection of Spar torpedo boats and there is a class of Turkish gunboats of which the Russians captured and reused. There are a couple more ironclads I could add to the Turks and in truth these are pretty straightforward to build. 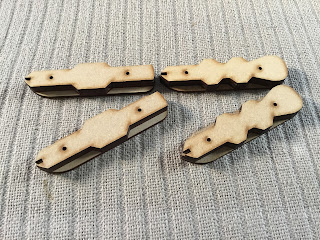 The four Turkish central battery ironclads. Aside from masts, funnels, bowsprits deck hatches and flag staffs (and painting naturally!) they should prove to be a pleasing distraction.

Is this a big temptation? Absolutely! Is this a big distraction? On the face of it you might think so when all along I have been concentrating on the ACW models. For me though, I like to think of this as being more a change of position in a comfy chair - I can always go back to how I was once the bits and pieces arrive from Warbases but in the meantime a change is as good as a rest!

‘The Portable Wargamers came in 3 by 3 hurrah, hurrah!’

I have to say that I am really intrigued by the concept of this and am hoping to get a trial game in tomorrow. I shall be using the block armies and rather fancy something Russo Turkish War based. I shall be taking a look at the Neil Thomas book of 19th century European wargaming as there is a rather nice selection of small scale scenarios I can adapt. Most of all though, it will be good to fight a wargame - the first of 2022!

Good news on Laurel.
I’ll be interested in seeing what rolls out for 1877-8

Thanks you old chap. It was certainly a better day today for news from the hospital.

For the Russo Turkish War I reckoned on around a couple of dozen models all in which sounds a lot but bear in mind the Russians used a number spar torpedo launches the build itself would be quite modest. I may allow the Russians the Mediterranean squadron to even things up a little although historically it was intended to act as a counter to the Royal Navy.

Should be fun though.

Fantastic news for Laurel, yourself and the rest of the family, plus only being 15 minutes away will be a big help I'm sure. Now you just have to get rid of this Covid malarky!

I look forward to seeing what your comfy armchair shift brings forth and hopefully some pics of a game too:).

Splendid news about Laurel David…
Russo-Turkish War… Ships… Temptation… You… Not Surprised 😁
It would be like me looking at an SRange Minifigs Hussar and saying…nah! Ive got enough.

Good health news is always the best.
Looking forward to seeing what you do with the 3x3 PW.

IIRC the RN Squadron sent through the straights was worth building in its own right. Just saying….

Glad to hear about Laurels progress. A distraction is a great thing for you at the moment. Indulge yourself.

Excellent news about Laurel, you must be so happy :) Good progress on the Turks, and you have some excellent reading material there

Great news David, I can sense your relief. Best wishes.

Thank you old chap - it is a huge relief on any levels for sure! The Covid appears to be tapering off in terms of the general yuck factor but I am still testing positive, as is my daughter and now my son.

It would be good to get a game in and I will be sure to report when I do!

It is indeed sir!

In my defence the RTW was always going to feature at some point - I have merely decided that the point is temporarily now!

I will let you know should anymore S Range Minifigs Hussars surface….

The various bits of health news for Laurel have certainly been the best today for sure!

I plan to use the 3 x 3 rules as written for a try out and then experiment with a couple of ideas.

I know, I know and it has given me a few things to think about for sure! The only problem as I see it is that historically the Russian fleet of the period in the Mediterranean and the Black Sea was pretty small and an RN squadron would make short work of them. I am thinking about the possibility of some ‘imagi-navy’ style adaptations though, in order to give the Russians some extra firepower.

It was the outcome we wanted in both cases for Laurel - a benign tumour and some specialist rehabilitation. The relief is palpable!

I seem to have hit a mental impasse with the last of the ACW ships - I guess the last few months have taken their toll - so a bright ‘new’ mini project will certainly help to reignite the mojo!

It most certainly is!

We are delighted with the news for Laurel and for us! The RTW book is excellent and building the models will reenergise me no end.

I have been thinking of something ‘Haguesque’ for the Russians though….I will say no more….

It certainly is - all I have to do now is get shot of the Covid!

It was very good news indeed thanks! I am looking forward to a short break from the ACW which will help to recharge and refocus my efforts for when the Warbases material arrives. 3 x 3 looks very tempting for sure and I am keen to try it if only so that I can ‘fiddle’ about with it!

Thank you old chap and yes, you are absolutely right about the relief factor!

The news about Laurel is wonderful! With a bit of luck, by the time your testing negative, she’ll be in the rehab facility and you’ll be able to visit her as often as you can,

Please pass on my best wishes.

PS. Glad to see that you’re managing to do some modelling.

Her being moved was dependent on a clear Covid test and she rang me a short while ago to confirm that was indeed negative and clear as a bell! Naturally I was worried that should she have tested positive that I would have been the ‘bearer of the plague’ albeit unknowingly. As you can imagine I am hugely pleased about this!

Laurel has been really appreciative of all the good wishes she has received from my network - many of whom she has never met - and it has helped her morale (and mine!) hugely.

I shall be back in the mast building business today and am hatching a cunning plan to increase the size of the Russian Black Sea fleet for the period…..

It will be poetic and almost ‘Haguesque’….I will say no more….