One Million Years B.C., Tusk and the Palaeo Diet 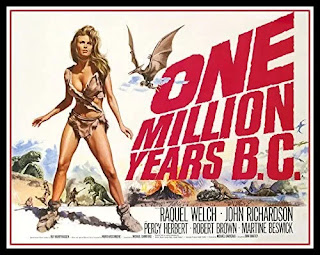 What can I say? I saw this at the cinema as a dinosaur obsessed young boy but now as a adult I can better appreciate the historical accuracy, the tender human interest and sparkling dialogue - not to mention a couple of other assets….So we know humans were not around when the dinosaurs were but why let such a detail get in the way of a good story?

A number of bloggers have been dabbling with a set of rules published by Ganesha Games under the title Palaeo Diet - Eat or be Eaten. The subject is basically a pre-historic hunting style game that is ideal for solo gaming or co-operative play. It requires very little in the way of material - perhaps a dozen or so hunters and their targets and if one is not too fussy then happily using cheap plastic dinosaurs would be a great option.

In short, it is an ideal game for those limited in space, time or resources or those that do not enjoy painting vast amount of figures - like me! If I was not able to paint up a couple of dozen cavemen I may as well give up one and take up something rather like collecting antique snuff boxes or similar….

Anyway, inspired by the efforts of the good Kaptain Kobold as well as the legend that is the Jolly Broom Man I took a cheeky look at the Ganesha Games website and before you knew it I had pulled the trigger on a PDF version for a paltry USD 10. As a side note whilst buying PDFs is a great idea it is also more than a person of my notoriously feeble resolve can bear - this is why I try to keep away from the Wargames Vault if I can (and usually fail I should add….). 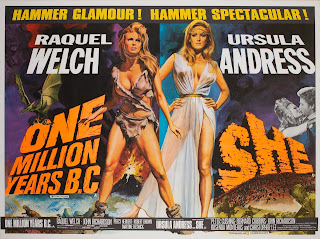 I actually saw both of these in the double bill you see above and remember being quite freaked out by the scene in She where ‘she’ - spoiler alert - turns into a very old woman. Raquel Welch and Ursula Andress in a double bill at the peak of their powers. More than mortal man deserves!

The first thing that struck me about the Palaeo Diet rules is their size - some 58 pages. They are nicely laid out with some wonderfully whimsical ‘cave painting’ style illustrations and with plenty of caveman style names in use for the examples of play. There are scenarios with some quite tongue in cheek names as well as the inevitable play sheets. It all looks straightforward enough and eminently playable and when I noticed the name of the author I could see why.

Nicholas Wright has penned a number of Ganesha Games titles including Galleys and Galleons which are a really good set of naval rules for battles in the age of discovery - say the 16th and 17th centuries.

I plan to knock up a modest set up for this using 15mm figures and so I turned to the Irregular Miniatures website as I recalled a similar set of rules from a number of years ago covering a similar genre (although expanded to include Victorian dinosaur hunting) called Tusk and written by Matthew Hartley. Sure enough the rules and the battle packs are still available so with my resistance level at an all time low I placed a very modest order with them. Tusk was expanded to include Sci Fi and Pulp (Tusk 2 The Wrath of Kong and Tusk 3 Steel Tusk) settings and Irregular Miniatures issued a number of expansion figure pack to go with the rules.

Purely in the interests of high quality and detailed research I watched the 1966 Hammer classic One Million Years B.C. starring Raquel Welch which was a real blast from the past. Aside from the dinosaurs - Ray Harryhausen at his finest - and a very dodgy Iguana and a Tarantula it was actually not a bad film. I had forgotten most of it from having seen it at the cinema years ago but it ticked the boxes in respect of certain elements of how we would imagine early man lived - bear in mind I am saying certain elements!

I would have enjoyed watching She again - I did not know that a follow up was made in 1968 but with different actors called the Vengeance of She - and of course She is the inspiration of SWMBO or ‘She Who Must Be Obeyed’…. 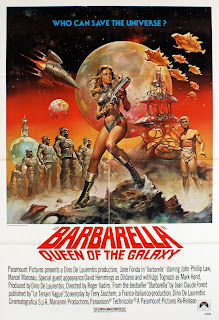 Classic swinging 60’s Sci Fi and the inspiration for the band Duran Duran.

After having watched this and made some Stone Age style plans I then sat down to watch another classic from the swinging 60’s - Barbarella starring Jane Fonda. Now there is an idea for a game or two…

So my Saturday evening was spent watching Raquel Welch and Jane Fonda with a side dish of remembering Ursula Andress whilst planning some cave man gaming.

As Jack Nicholson said when playing the Joker in Batman….

I've often pondered purchasing Tusk, so look forward to your Review.
Some great Weekend viewing there!

Back in the day Tusk was a lot of fun so it will be good to see how they compare with Palaeo Diet. The whole thing ticks many boxes for me - solo play, small playing area and few figures (meaning less painting!).

It was great fun watching those two films and I only wish I could have found a version of She as well but we will see what YouTube has!

Ah, yes. I succumbed about a year ago. Picked up PD at the time and then Tusk just recently. Looking forward to your reviews of the games.

Tusk is great fun as I recall and I had planned to use it for Sci Fi stuff but never got around to it. I will need to get the figures first - and get them painted - before a game but even I should not have too much trouble painting up some cavemen and the odd Mammoth!

I remember Barbarella ! - 'she strips in space' ! - and annoyingly the title text gets in the way of any interesting bits . Oh 1 I forgot the 'orgasmatron' !!!!!1

Argh... dinosaurs roar. I got a copy of Cretacea a while back, but me being me (as slow as snail snot) haven't yet gotten around to doing anything with it.

Hello there the Good Soldier Svjek,

It was indeed a rather suggestive in a few parts! Duran Duran playing the Orgasmatron and David ‘Long live the revolution’ Hemmings hamming it up for the Galaxy was great fun.

Let us not forget the Positronic Ray.

I have not heard of Cretecea….until now that is!

It all looks a look of fun though and something that I can tackle relatively quickly and cheaply.

‘As slow as snail snot?’ As I am typing this I am still looking at a box of Heavy Gear models donated by yours truly…..

Good to see you’ve been doing intensive academic “research” on the subject. I’d hate to think you’d just thrown yourself into this willy nilly. Lol. Hope you have as much much fun with as I have.

It certainly looks as though there is a lot fun to be had with it. I am going down the 15mm route using Irregular Miniatures and of course there is always the ‘Lost World’ VSF bolt on to consider in due course.

Am I staring into the abyss? You may think so….I couldn’t possibly comment….

Watching One Million Years B.C. was a dirty job but someone had to do it - how we suffer for our hobby eh?

Another nice little diversion there David:). I must admit that Ursula Andress looks absolutely stunning in 'She' which I also think is a pretty good film!

I am really hoping that this will be a ‘nice little diversion’ if only because I want to paint some figures! A couple of dozen is all it takes and the games will be nice and compact.

Ursula Andress, Raquel Welch and Jane Fonda - now that is a trio that as Jack Nicholson said in Batman (the Michael Keaton version) would ‘put steam in a man’s strides!’

I think it was Milo O'Shea "playing" the Orgadmatron?

You are indeed correct it was the late Milo O’Shea playing the character of Durand Durand (the band Duran Duran dropped the final d from the name) whilst playing the Orgasmatron.

Great films. I wonder if cave man and Dino hunting could be worked into a Portable Skirmish Wargame variant.

Funnily enough I was thinking about that myself but it will be a while before I could spend anytime on it. The films are vastly entertaining and I read somewhere that Ray Harryhausen included the Iguana and the Tarantula as zoomed in actual animals rather than his trademark stop frame animation using models so that viewers would see his dinosaurs in a more realistic light. He later admitted that this was a mistake….

All good fun though and I reckon that a PW variant of Dino hunting - bearing in mind you could readily take this to include the Victorian era, even the Wild West (Valley of the Gwangi?).

I have to admit, it was purely the minute image of Raquel that attracted me to visit your blog - thats what they call click bait, isn't it! "She" was a great film - the best of these three in my opinion! Good luck transforming this onto the table top, I am pretty sure there is a evil villainess miniature on the 7TV or Crooked Dice web site that looked to me to have been based on the Ursula Andress character.....

Without a doubt She was the most ‘sensible’ of the three but all were good fun in their own way. I had not thought about translating She into a tabletop game but I am sure there is certainly potential to do so!

For now though I shall look to the cavemen stuff in 15mm. There are plenty of skirmish type rule options to explore for this genre and moving into Victorian ‘lost world’ territory would be a very easy step to take…..(pauses to step back from the edge of the abyss…)

This brings to mind a 10,000BC type adventure skirmish campaign with cave men, dinosaurs, giant insects and lizards, and maybe some lizardmen too. Throw into the mix cannibal tribesmen, amazons and time traveling Victorian big game hunters and it should add up to some whimsical fun! I've just ordered a few plastic dinosaurs and I already have (mostly unpainted) figures for everything else so it looks like I'm all set for yet another side project....

This was what I was thinking although you seem to have the bit between the teeth and are further along than me! There is plenty of potential for sure and he whole Victorian angle is certainly very tempting!

Something to think about then….

Somehow I just new you would be buying these rules…
They look like a lot of fun… I may have bought a Mammoth, a Platybelodon and some other silliness.😁

You will not be surprised to learn that I have a cunning plan to go with these….

I opted for 15mm Irregular Miniatures simply because they are cheap, readily available and better suited to my modest painting ability.

The research material was fun for sure!