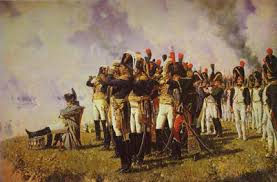 I suspect that I am not alone in thinking about the possibility of using Bob Cordery's Big Battle Portable Wargame for other periods aside from the late 19th century and the 'Modern' set. For me the next period would be the traditional musket era of 1700 to around 1850. I am convinced that the rules would work quite happily for the entire period but it certainly gave me pause for thought when I considered all the features so beloved of the era - features that form the subject of this post. What I have tried to do is to take the mechanics of the Portable Wargame and then see how they measure up against 'real world' usage.

For the most part (and I should point out that this is entirely my own opinion) many games set within the horse and musket period tend to emphasise lower level detail. I am not including 'army level' games in this statement though! Formations, cavalry 'weight' and varying levels of light infantry/skirmishers are all important considerations for the mainstream horse and musket gamer (again, this is very much my own opinion so feel free to agree/disagree!) so how does the Portable Wargame address such considerations?

Formations are pretty much ignored altogether and at first glance you could be forgiven that this is a glaring oversight. However, when you drill down into the rules you can see that at least one formation is represented, albeit at a very abstract level. Road movement grants a bonus to the unit in question as long as it stays on the road for the move. You could not easily get a two deep line of 600 men on a road without deploying them into a formation that would fit - a column being the obvious answer. So there you have a distinct 'formation' being represented. Where it gets tricky is when you have to think about attack/assault columns, squares or even (and this dovetails neatly with the light infantry question) skirmish screens. As is stands there is no provision for these horse and musket staples within the Portable Wargame.

I believe that adding such detail to the rules would be a very straightforward process and would add immeasurably to the 'feel' of the period. For columns the old wargames staple of making them more vulnerable to fire and giving the target of such an assault a penalty for the morale implications would seem to be easy enough to incorporate. Squares would obviously benefit the infantry against cavalry but again, makes them better targets whilst the attacking cavalry would be largely impotent (ignoring such events as Garcia Hernandez). Again, this could be factored in relatively painlessly.

Skirmishers are a significant issue as I believe because the distinction between them and the line infantry was so marked during the period (at least officially in most armies - I am not including Revolutionary France in this) the differences should be reflected within the game. I have a number of ideas around how to tackle this which I will describe once I have tried them out.

Cavalry 'weight' can be handed rather neatly via a combination of rating/strength points. My feeling is that heavier cavalry should have more strength points and the use of the quality rating in conjunction could be used where applicable.

The final point I should add to this is that smooth bore muskets should perhaps have a lesser range - I am thinking perhaps 2 hexes/squares would be more appropriate as it means that the odd rifle armed unit would reach out to 3, thereby preserving its historical range differential.

All of this is very much an exercise in thinking out loud but I reckon that there may be some mileage in the ideas described. The beauty of the Portable Wargame is that it is robust enough to withstand any amount of tinkering and so I can indulge my flights of whimsy with a clear conscience!

Please carry on thinking out loud as I am sure that I (and other people) would be interested to see where this particular idea goes.

The expression 'itch - needing to scratch it' certainly features here! The great thing about a blog is that you can tap into a whole world of thoughts and ideas from all over the place so hopefully I can pursue this to some logical conclusions in time. The ideas I have scenario wise should this work out are many and varied and definitely unusual!

My thoughts will continue out loud!