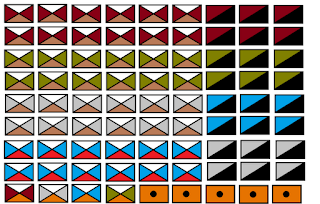 The final batch of the Native and Tribal troop labels. I have gone for white turbans for the infantry, black 'horses' for the cavalry and have even produced some Janissaries.

I have completed the 'turban wearing' troop blocks labels and so will apply these to their blocks this evening. The turban is the white triangle at the top of the block whilst the light brown at the bottom is a stylised skin tone. I have stuck with 'earthy' colours for the left and right  and have produced three contingents, complete with cavalry, to add variety to the force being represented. The cavalry are assumed to be mounted on black horses and so are easily distinguishable from the regulars.The artillery is on a terracotta coloured label and I have also included some machine guns on the same basis - I am thinking of Arab Revolt or Lion of the Desert style actions.

I have also produced some Janissaries as well - and I have a rather special plan in mind for them in due course.
Posted by David Crook at 16:58