British infantry desperately attempting to hold off the German onslaught.

Once again I have allowed myself to become pleasantly sidetracked by a large bout of 'Ooh, shiny' heralded by the imminent arrival of a cheap paperback edition of the late Richard Holmes's 'Riding the Retreat' - his journey by horseback along the route taken by the B.E.F in 1914 as it retreated from Mons to the Marne, accompanied by some friends and mounted upon Thatch, the horse that ate Europe.

The paperback edition - well worth a look

This is a splendid book combining as it does a rattling good travelogue interspersed with military history as only Brig. Holmes could write. It prompted numerous games between Mr. Fox and myself a number of years ago using his old 15mm WW1 collection and try as we might, our respective constitutions were never able to replicate the good Brigadiers liquid intake....;-) Even if the Great War is not your thing I urge you give this book a go as it is a thoroughly entertaining and informative read.

The action I am about to describe is loosely based upon what seemed to be the daily routine for the soldiers of the B.E.F - that of a sketchy rearguard facing overwhelming odds and being used to delay and take the sting out of the enemy attack. The rules I shall be using will be Bob Cordery's Big Battle Portable Wargame 19th century set which are designed with hexes in mind so once again the Hexon terrain will be coming out and I shall be fighting on a 13 x 9 playing area.

The British Forces are heavily outnumbered and will have no chance of defeating the German onslaught outright - however, they will be able to blunt the attack to a degree and inflict telling damage as they fall back. In the end though, the German offensive will continue and so this game is very much in the nature of a test of character - think of it as a World War One equivalent of the Star Trek Kobiyashi Maru scenario....;-)

Special Rules: Scenario length is 8 turns by which time the Germans must have more troops within the rear three hex rows of the British position than the British in order to claim a victory.

Colonel Wellhouse surveyed his small force with a professional eye and, all things being equal, was well satisfied with the positioning of his troops. It was a small force, far smaller than the circumstances warranted, but even so, it should be more than sufficient to give the Hun a bloody nose should the need arise. Thus far it had been a succession of brutal firefights and marching, endless marching as they fell back in line with the French. The men were tired and hungry but in good spirits although there was now far fewer of them. They were thinly spread to be sure but the Colonel knew they would not have to hold for long. I fact they did not have to hold at all, merely delay until the next set of orders arrived.

The Colonel surveyed the horizon and then checked his pocket watch. They, the Germans, were late this morning which meant a momentary respite - a respite from shells, bullets, death and horror. Every hour without the 'morning hate' was welcome and so, for the time being anyway, the morning sunshine, ordinarily the precursor to untold and abject misery and suffering, was a pleasant diversion.

General Wilhelm Von Der Vall was eager to be off. His orders were clear and the weariness of his men would have to be ignored for another couple of days - the advance must continue. He had been harrying the British for days and the pattern was almost a routine - their murderous machine gun fire had decimated his units but always they pushed on and around the flanks so that they continued to drive them from one position back to the next. It was a question of willpower, of survival, of who would last longest, and he had no doubt that the next attack would be more successful than the last (the self same thought he had the day before and the day before that....). It should be easy - this 'Contemptible Little Army' he faced was proving to be anything but - but his forces were paying the dearest price for every metre of ground they gained. He looked over the tranquil countryside  ahead of him and with a silent prayer, a prayer that the British were not ahead of him, he issued the orders to resume the advance. 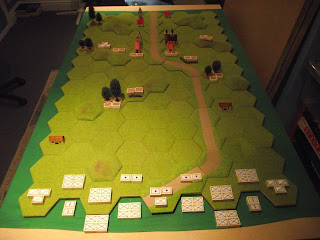 The German juggernaut poised to advance.... 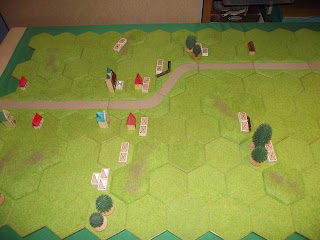 ....and the thin brown line opposing them. Colonel Wellhouse split his infantry units into two halves in order to cover as much terrain as possible. 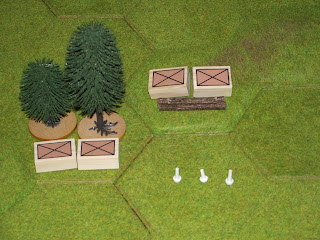 Turn 1 Artillery Fire. The leading British infantry were content to be spectators as the German guns opened fire - and came up short. 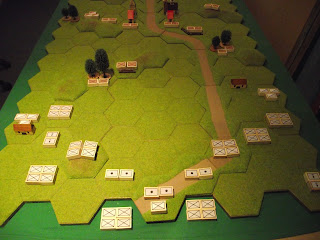 Turn 1. 'Vorwarts!' As the German hastily advance along either flank the British settle down to await developments. 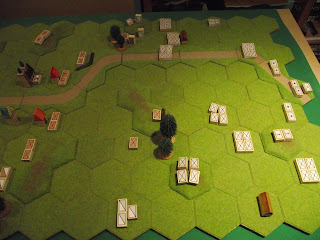 Turn 2. The German artillery fell silent as their infantry moved into the attack in the centre. The weight of numbers soon began to tell as the British suffered casualties and decided to fall back rather than be overwhelmed by the rapidly closing German infantry. Meanwhile, the German cavalry (at the top of the picture) charge down the hill into a small, wooded copse and engage the British in a desperate hand to hand struggle while their countrymen push up in support. 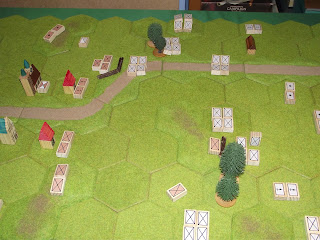 Turn 3. The German artillery moves up in support whilst their infantry pushes forward across the battlefield. The British infantry, chased from the woods either side of the road, attempt to rally a firing line both to the north and south of the centre. The German cavalry meanwhile, with infantry in support, charges the British artillery! 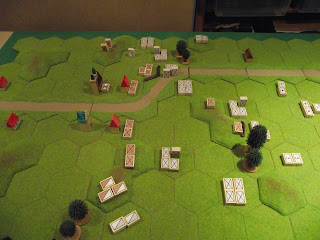 Turn 4. The frenzied melee to the north of the town swings first one way and then the other. The gallant British artillery are over run by the German Uhlans but not before inflicting damaging casualties on the rampant horsemen. Meanwhile the nearby British infantry and the supporting machine gun hang on grimly to the town in the face of a torrent of German infantry. To the south, the Germans rush every available man forward to overwhelm the defenders along the ridge, thereby enveloping the town and threatening to cut off the British retreat! The British centre, battered, outnumbered and clinging on by its fingernails, continues to exact a heavy toll of the German attackers. 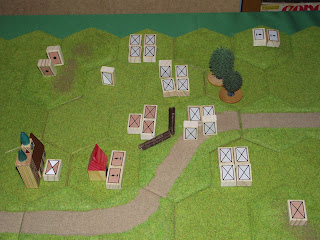 The crisis at the north of the town - note the Germans making sure that 'the right hand sleeve of the right hand man brushes the channel!' 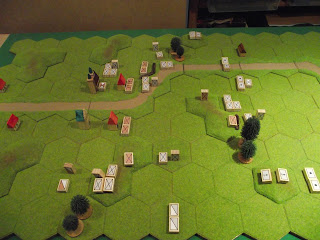 Turn 5. Nip and tuck, tit for tat; both sides exchange wild and ill-timed blows; like two punch-drunk fighters at the end of their strength and endurance. The Germans gain the hill to the south of the road but are unsupported and unable to push forward. To the north, the Germans have been barely contained by the British defenders but are still in some strength. The British line is bent almost to its extremity whilst the attacking Germans are unable to mass for the death blow. The attack has been blunted, the Germans halted but the British are also at the limit of their endurance. With one accord, both sides call a halt and break off the action, to reorganise, regroup and to prepare for action once again. The line has been held - one more page written in the legend of the B.E.F. with the blood and sweat  of the 'Old Contemptibles'. 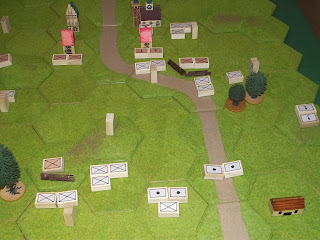 The Germans in the centre, at the point of their furthest advance. 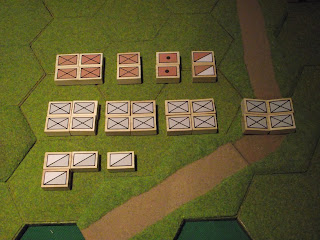 Colonel Wellhouse allowed himself the luxury of a long and drawn out sigh of relief. He had survived and his command had performed magnificently. The losses were severe and he desperately hoped that orders would arrive soon to enable the remnants of his force to fall back. In the short term though, his anxiety about the future could be postponed as the pressing business of restoring order to his battered but unbowed units would take precedence. It had been a hard day - and tomorrow would be harder.

General Von Der Vall slumped wearily into his chair as the never ending casualty returns passed across his desk. His force was battered beyond recognition and only the prospect of reinforcements arriving in the morning would enable him to even consider continuing the offensive. The British had gone far beyond being a mere nuisance and had proven to be a redoubtable adversary. He rubbed his eyes wearily and with thoughts of impending disaster looming in his consciousness, sunk into a haunted sleep.

Phew! That was a game and a half and I really thought the British were going to run out of troops before the Germans were even inconvenienced. The British were stubborn, resolute and also outrageously lucky with most of the close combats and that was what clinched it for them. The Germans were unable to make full use of their advantage in artillery and once again, the attackers went forward with more style than substance and paid the price accordingly. The rules worked very well although I will need to pay rather more attention to 'complex melees' as there was plenty of these in evidence.

A great game and one that has inspired me to research the period further.

What a great scenario, David!
I just finished a 1915 trench assault game, sat down to right it up, and find this account posted.
At least your German Cavalry got into action.....
-Steve

Thank you sir! It was very tense and the German cavalry did pretty well overall - they destroyed the British artillery (ruining themselves as they did so) and pushed back their opposite number on the other flank.

It was incredibly tense to play and the final game turn resolved it but it could easily have gone the other way. I have never seen so many 1s rolled by a side succession as the Germans did!

A very exciting battle report! It proved to me that the rules work and can produce battles that have unpredictable outcomes.

PS. I have mentioned your battle report on my blog.

I was really expecting the Germans to brush the British aside - as they probably expected to do so historically - so the result was a real about turn.

Many thanks for the mention - I am really enjoying using the rules and have much planned going forward using them!