The Joy of Hex - Revisited

Now that looks pretty impressive! Check out Kallistra for more of the same - its a pity there are no blocks in evidence, otherwise it would be perfect....;-)

Earlier this year I was banging on about coming up with a hex-based variant of Volley and Bayonet - the army level wargame rules designed by Frank Chadwick - and indeed, I spent a little time pondering how best to tackle this and some of the ideas I came up with featured in the following post - Volley and Bayonet on Hexes.

I really like the idea behind these rules and so it will probably come as no surprise that I am keen to make use of some of the concepts for my own purposes. All in good time though, as the first thing I want to clarify is what I am using hexes for.

For me a hex is not just an area that is used to regulate movement and combat - it is (or it should be) a representation of an area of terrain. The sides of the hex should not be seen as barriers as the terrain underneath should be naturally flowing across the landscape being represented - as it is for a non-hexed table top game. It is my opinion that units should be able to make use of the area covered by a hex - especially in respect of formations etc. I am of the opinion that for the horse and musket period the use of formations is pretty much essential and so incorporating this within a hex based rule set is for me is obligatory. I have messed around with some unit formation ideas and am thinking that the following just about ticks all the boxes: 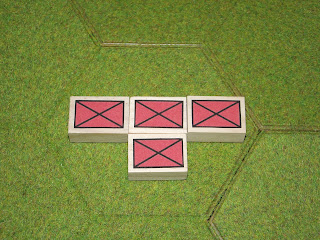 An infantry unit in line - the bottom block is simply there as it does not fit on the end of the line within the hex! 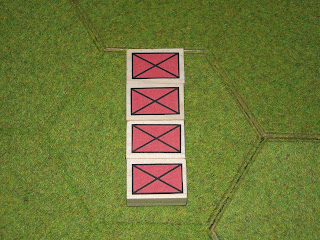 An infantry unit in a march column 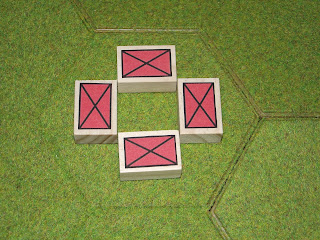 An infantry unit in square 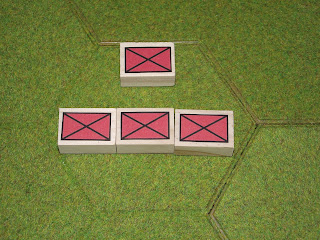 An infantry line with skirmishers deployed 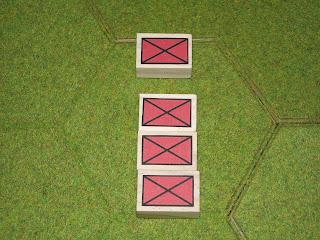 An infantry column with skirmishers to the fore. 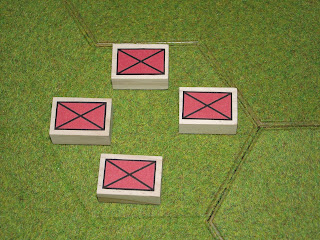 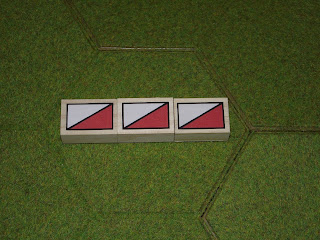 A Cavalry unit in line 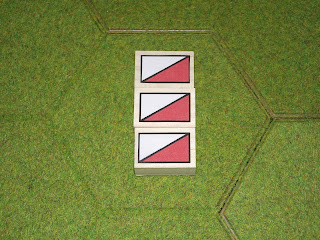 A Cavalry unit in column 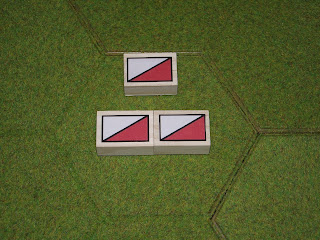 A Cavalry unit in line with a skirmish screen 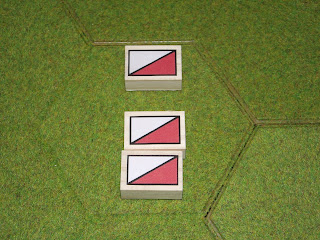 A Cavalry unit in column with a skirmish screen 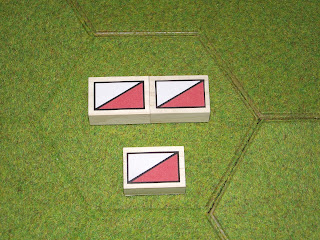 A Cavalry unit in line with a reserve 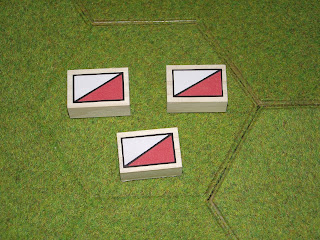 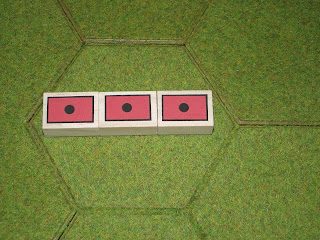 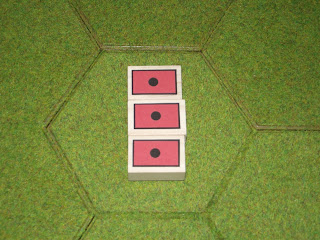 Artillery limbered up for travelling

These are just a few examples of the types of formation I shall be representing for the horse and musket period and the skill of the general in deploying his troops into the correct formation when needed will obviously be of paramount importance.

My plan in the short term is to concentrate on the horse and musket period although I have a number of ideas for the modern era to be going on with.

Interesting. I have no intention of using hexes myself but your ideas certainly show merit for those who do.

I would presume, of course, that these formations could face any side of the hex . . . but how would they work for facing the points of the hex?

At the moment I am looking to use hexsides only rather than hex points although certainly this could be viable. I shall be including rules for facing as it should be important in this era - there are few things to beat a well-timed flank attack!

That's actually pretty surprising how many formations you could actually depict there - I hadn't thought about it up to now, but apart from a couple that look similar, they work both visually and in terms of the rules..... just hope your opponent doesn't deliberately jog the table whilst your not looking...... "yes, that cavalry unit was in skirmish order all the time!".....

I had toyed with using V&B in the past, but decided that adapting MEGABLITZ was more suitable to my needs. I can see why you have chosen V&B as a starting point for your rules, and I suspect that it will be very suitable for your requirements. I look forward to seeing how your rules evolve.

The blocks are pretty solid and tend not to move very easily (except on slopes of course!)so any 'opposition induced trauma' should be minimal!

The formations are not finalised as such but I reckon I am on the right track.

There are a lot of great concepts in V and B that I will happily, ahem, adapt to suit my needs but they are not the answer to everything. To begin with, formations are not considered in the rules whereas for me I want to reflect them in some way.

I reckon I might have an answer though to the perennial problem concerning unit activation/commands/orders.

I think you could do the line with all 4 blocks online. Sure the ends will overlap the hexes [which aren't supposed to be a barrier], but I don't see that anything, unit wise, will be there to get in the way, if I'm understanding how you intend for this to work correctly.

You are quite right with the 4 blocks in a line and for the reason given! The pictures were done rather hurriedly and it was only after I had taken them that I realised that 4 in a line does not actually make a massive difference and looks a lot better.