Boot Sales, Billhooks and a nod to Charge! 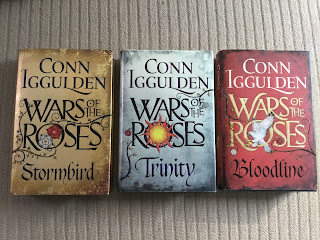 I picked up these three in hardback for 50p each! There is a fourth volume but as my knowledge of the War of the Roses is limited to playing Kingmaker some 30 years ago I figured it might help get me up to speed. In any event it coincides with the below previously mentioned! 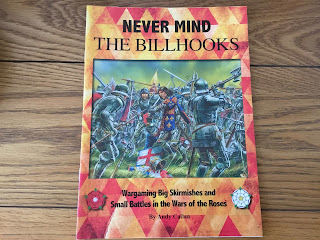 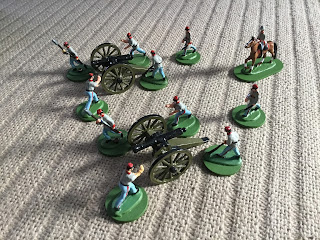 With grateful thanks to Old Painter Bob for the various add ons he very kindly completed for me above is a complete Charge! Style artillery battery for the 30mm ACW project.

The pickings at out local boot sale have been rather slim recently and today was looking as though it was going to be the same. Luckily, as we entered the final row we came across a whole smorgasbord of miscellany which included several crates of hardback fiction. I came across the three above and with thoughts of both Andy Callan’s excellent rules and the gentle persuasion of the renowned Trebian, I snapped them up. Would I ever game the period? To be honest it would be fun to do so but it is certainly not on the immediate horizon! Having said that, the temptation to throw some cash at a couple of Perry plastic box sets may prove to be irresistible!

The nod to Charge will be the first picture in an occasional series - occasional in that it depends when I can get the figures out - showing the 30mm ACW Spencer Smith collection organised as per Messrs. Young and Lawford’s classic book. At full strength each army will consist of an 8 figure cavalry squadron, three 16 figure line companies, a 16 figure ‘elite’ company (Zouaves for the Union, Texans for the Confederates), a 12 figure sharpshooter unit, a 2 gun artillery battery and a single gun and crew. On top of this lot are the command, musicians etc.

With the exception of the soon to be finished Texans and the two sharpshooter units, everything has been painted by Old Painter Bob.

They look really nice and I am looking forward t getting them into action at some point.

The Conn Iggulden books are excellent...every so often there would be a reference to things like the Warden of the Cinque Ports and I'd hope he'd be summoned to Rye! We have our 1st Billhooks game tomorrow... they look like a great set

I am looking forward to reading them and Billhooks has really intrigued me so I will look forward to hearing how it goes.

I don’t know why but I have this real hankering to buy some Perry plastics to have a dabble....

One cannot go wrong with Charge! The unit organization therein has guided my own painting and collection for quite a few years now. A lovely battery and crew there.

Well that was a good find at the car boot and somewhat timely!. The rules are excellent from the few trial games i've played so far with my wooden blocks, but really need to have a proper game soon.

I am looking forward to reading them but have a horrible feeling they may well lead me down a dark path....

Old Painter Bob really captured the old school look I was after with these fellows and the infantry and cavalry look suitably splendid alongside them. I tend to think about armies in terms of Charge style units as these can be ‘sliced and diced’ to suit any number of rule systems. I cannot see myself going back to multiple figures bases again - movement trays work well when needed.

I am still fighting the urge to buy a load of Perry Plastics for the sheer hell of it to go with these rules but have so far managed to resist it.

The problem I have is that it is my birthday in a couple of weeks and I know that funds will be arriving.....

Always dangerous that combination of a good book or two, a cracking looking set of rules and a pocket full of cash!