After having removed the bush hat wearing figures from Eric’s 14th Army I decided to sort out the remaining Indian infantry. As was usual with Eric’s collections the variety of figure manufacturers on show was, as ever, plentiful! I have identified the Foundry offering but have no clue as to the others. 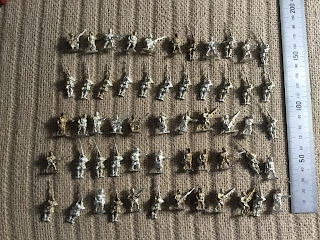 These are the smallest figures and are also the only ones wearing trousers rather than shorts. Note the vast array of prone riflemen! 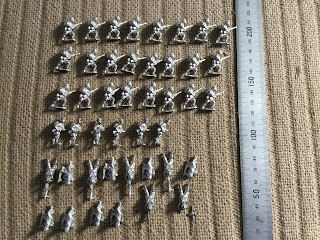 No mistaking these from Foundry although I am unsure about the SMG armed NCO. Eric had converted a couple of prone Bren gunners into Boyes anti-tank riflemen. 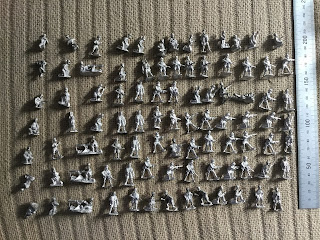 This is the biggest batch - both in numbers and size

There are plenty of figures here and Eric had them all organised into units from platoon down to section level. Mine will not be quite so organised as I shall be using the figures on an ad hoc basis or rather scenario specific.

I also came across this fellow. 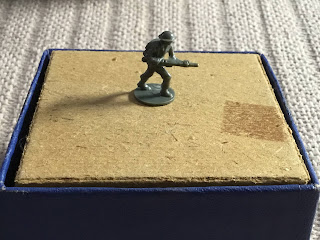 This is a mystery. He is 20mm hard plastic and is a British infantryman but I have no idea where it is from.

I have a small Battlefront order of some British bits and pieces to finish them off and so all that will remain will be some vehicles, some terrain and of course, painting it all. First of all though, the ACW collection needs some TLC.
Posted by David Crook at 17:14

Fire at Will said...

Your mystery figure is an Almark plastic British Infantryman. There are more details here

I'm lucky to have platoon of these fellows

The figure was sold as part of a set by Almark. (http://www.plasticsoldierreview.com/Review.aspx?id=647)

There were also some support weapons (http://www.plasticsoldierreview.com/Review.aspx?id=648) as well as metal German figures sculpted by Stadden (http://theoldmetaldetector.blogspot.com/2010/05/almarkcharles-stadden-20mm-ww2-figures.html).

A wild guess could be a plastic figure from a range Bish Iwaszko did in the early 70s. I bought some from him from and I recall them being hard plastic. Of course this could, and probably is, completely wrong.

Hello there Fire at Will,

I remember seeing these advertised years ago! If you want another one let me know and I will pop him in the post!

It is a very business like figure and would look well even today!

The figures I bought from Bish at a small factory unit in Richmond are definitely the Almark ones. He sold them loose and you could pick what you wanted. These figures are in fact copies of ones originally made Triang for its Battle Game. Terry Wise mentions this game in his book 'Introduction to Battle Gaming'.

There are some details of the game on this blog.

I was a junior member of the Richmond Wargame club at the time and played many WW2 games using a set of rules I still have hand written in an pld school exercise book.

I look forward to see these painted up Dave.

Fire at Will said...

David, thanks for the kind offer, but it's not worth the bother of posting as (for now) my WW2 Brits are complete.

Sadly there only appears to be a single example amongst the WW2 stuff I have of Erics. Having said that his painted collection - which is, by all accounts, huge - may well feature more of them.

Many thanks for the link which I shall enjoy later today.

I will not be painting these as I am focussing on the bush hat wearing types. All told between the two collections there are around a hundred figures for each army - 50 or 60 fighting men and the remainder are gunners, support, command etc.

It was very much an Eric thing in that he often used figures produced by various manufacturers in his armies. To be fair, back in the day I am sure we probably all did the same due to availability.

Hello there Fire at Will,

No problem - but you know where he is should any of his comrades go AWOL!