Rising with the Jacobites 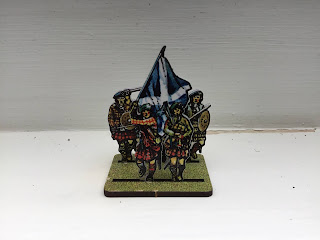 With my mortal aversion to figure painting being legendary the following will probably come as no surprise! For many years I have had a guilty pleasure in the shape of the Jacobite rebellions. I can offer no reason for this - I suppose it appeals to the romantic in me although the era in question was anything but by all accounts. I don’t know why it should have the appeal that it does but, it is what it is and so when I saw that a standalone Command and Colours: Tricorne game covering the rebellions was in the offing I knew I would be very hard pushed to resist it.

So I didn’t - and it arrived today!

I have wanted to game the rebellions for many years but had resigned myself to never doing it using figures simply because painting all that kilted and lace wearing foot was not something I would ever do. 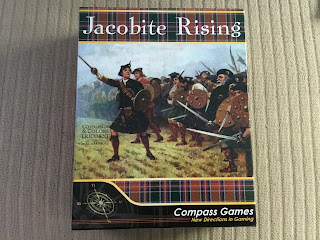 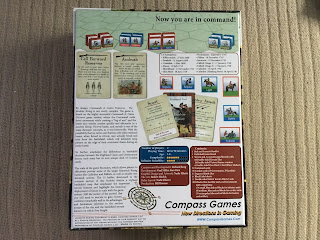 The Command and Colours system needs little introduction from me and as such is very straightforward to play. The Tricorne series introduces some army specific cards as well as the usual command cards to that the respective forces are more representative of their historical counterparts. With a game such as this there will be many I am sure that will opt to substitute figures for the blocks but that is not something I am even remotely considering!

To support this self contained standalone project I have a small library of relevant tomes which I shall now be dipping into for some inspiration.

I have only ever been to Scotland on two occasions - both times it was business and based in Edinburgh. In fact one of those visits did not go beyond the airport business park! The other I stayed in the city itself but with no time for sightseeing. Given the way foreign travel is at present it may well be that next year will see me heading north of the border.

No metal figures were harmed during the writing of this post....

For what its worth Culloden Field is only a short drive from Inverness Airport. You could fly in and out hire a car to do the battlefield all in a day if the mood took you and funds allow.

I would have jumped in with both feet for these figures in the 7YW but there are too many wrongly placed Colonels Colours for me.

David, Edinburgh isn't really Scotland! You need to get up to Inverness and Culloden for the full effect if you want to game the 45. And yes, you have to paint tartan...

I played my first game of Jacobite Rising a couple of weeks ago. My Government forces got butchered by the Highlanders.

Am very tempted with this box , have the AWI ones so looking forward to perhaps getting it as an early Christmas present ? .

I am looking forward to trying it out and given my recent acquisitions I am certainly feeling the love for board games again!

That would be very tempting but I suspect the funds would struggle to cope and as for the thoughts of my beloved....

I take my hat off to anybody that has the patience and perseverance to tackle anything from the 18th century using figures - never going to happen for me!

I know and that very fat has been pitted out to me on several occasions! It is a bit like visiting London and saying you have been to England!

To be honest this year has made me look much closely at our own military history rather than that of overseas. The launch of this game was vert timely as far as I am concerned and who knows? Next year we may well be heading North of the border - assuming we are allowed that is!

Well it certainly happened a couple of times! I am also think of inter clan warfare for a change - a little earlier I know but I still keep seeing the battle from Highlander in my mind’s eye....Either that or Liam Neeson trying to get away from Tim Roth!

Hmmm, something else to think about then! I really like the self contained nature of this game and am wondering if they would ever look to do something similar for the war in India.

That would have me reaching for my wallet for sure!

Great way to do a new period with the minimum of work! They're doing a special offer at the moment which I'm trying hard to resist...
Look forward to seeing the first game report.

These "flats" are so much better than the old school "flats" of yesteryear! A friend of mine had only flats and I used to get a crick in my neck and back from having to squeeze over to the side of the table to see what kind of troops were coming at me!

The terrain tiles have been punched out and all the blocks are labelled so I am good to go in short order. I may give it a run out over the weekend as I am due a game or two.

Having full frontal versions (Oooerr Missus) looks far better than side views and Peter Dennis has really captured the look well. I have seen the paper versions of these figures at Salute a couple of years ago and they looked simply stunning.

They are lightweight and all you do is pop the off the sprue, fix them to the base and they are ready to use. The range is expanding all the time and I am thinking they will enjoy a lot of success.

It looks a lot of fun for sure!