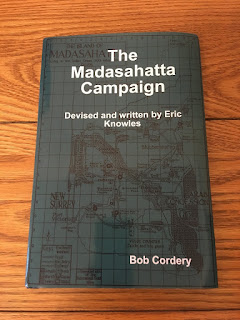 A fitting tribute to Eric’s campaign and a piece of wargames history. 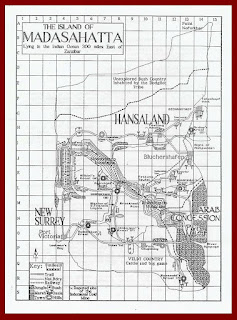 A map of the island and for fuller details I suggest buying Bob’s book - you certainly would not be disappointed!
It is funny how things go around in cycles and then when they come into focus occasionally generate an idea or two. Madasahatta is course the island setting for the famous 1914 based campaign run by Eric Knowles in the late 1970s that I was lucky enough to take part in. My involvement was minimal as I only appeared at the very end of the campaign but it was very much one of the wargaming highlights of my life. Bob Cordery, another survivor of the campaign, coordinated the surviving documentation about the island, it’s topography, dramatic personae and the combatant forces and also penned a brief biography of Eric Knowles which he has published via Lulu. It is not a campaign history as such although the two campaign newspapers feature therein.

Bill, Eric’s son, has the remnants of the forces that were used and amongst these feature quite a few Jacklex figures. Jacklex have a new lease of life and new management and Mark Lodge, the new proprietor, is looking to expand the range. Thus far he has added the French in Mexico and, perhaps more significantly in the context of this post, German colonial troops. There are also Sudanese infantry which could double as Askari. Add in the ‘modern’ artillery models available in their US in Mexico range and you have a veritable smorgasbord of gaming potential.
In many ways Madasahatta was almost a Colonial campaign, featuring as it did British and German overseas troops and various varieties of tribal types - think Zulus and Mahdists/Afghans with some European settler types (Boers by any other name) and you can see what I mean. The fact it was set on an island meant that the naval dimension featured  so in many ways Madasahatta was a fusion of late 19th and early 20th century warfare.
I had flirted with an idea to shape an updated version of Madasahatta to include East Africa and the Arabian peninsula but this kind of grew out of all proportion to what I originally intended so I quietly shelved the idea. However, like a burr under the saddle, the lingering and siren call of the island is never far away.
In many ways raising forces based on the original organisation for the campaign would serve to satisfy many a gaming itch. It would be difficult (but not impossible) to refight the campaign but I am thinking that instead it makes a wonderful canvas to embark upon on one’s own Madasahatta adventures. Almost a kind of ‘Carry On’ style distraction. There is sufficient variety of forces therein to satisfy the most jaded palate or seasoned Colonial gamer.
At the opening of this post I mentioned about circles and such like and so it is worth mentioning that I saw a number of Jacklex figures in various parts of Eric’s Ottoman Turkish army of all things and I was struck by the elegant simplicity of the figures. The fact that the range is a going concern and with new models being added means that as a distinct possibility Madasahatta could reappear once again as a viable gaming setting.

I have a few Jacklex colonial figures and their current availability makes them a great temptation! The ACW figures are also very nice. Bob's Madasahatta book gives a glimpse of what must have been a fun campaign to be involved in.

They are very elegant figure, from a more civilised age....

Seriously though, the range is very stylish looking in an old school way and I will certainly be acquiring some in due course.

There is always the danger when looking back that things suffer from the ‘rose tinted spectacles’ syndrome and as mentioned, I only appeared at the very tail end of the campaign. I do remember Eric’s rather florid descriptions though and the sense of humour that ran through the whole thing. It was a wonderful idea and through it I have made many lifelong friends. It was enormous fun - even the small part I was involved with.

I am giving very serious consideration to producing a new map of Madasahatta in the same style as my Operation Barbarossa map.

I suspect that in doing so, I will be tempted to use it as setting for a Colonial/WW1 campaign ...

As Oscar Wilde once wrote “The only way to get rid of a temptation is to yield to it. Resist it, and your soul grows sick with longing for the things it has forbidden to itself, with desire for what its monstrous laws have made monstrous and unlawful.”

I just can’t help but think that using the island solves a great many things. Crucially for me are two things - the naval dimension and the fact that German Colonial troops have appeared! The Egyptian infantry could readily serve at Turks with the Sudanese as Askari.

It has certainly given me much pause for thought I can tell you!