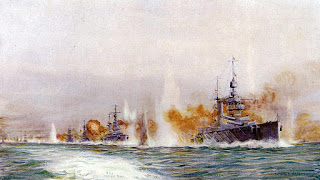 The following game is dedicated to the memory of Alan Cook who recently lost his long battle against illness. Both the models and the copy of the Avalon Hill game Jutland were donated to me shortly before his death in the hope that good use would be made of them going forward. Unfortunately I was unable to get a game organised before his death but I hope that the following will serve, in a small way, as a fitting tribute to his memory.

Captain I. M. Hyde-Bowned of H.M.S. Tiger was not in a good mood. His ship was bringing up the rear of the line and due to a faulty interpretation of a signal from the flagship had missed the turn ordered some fifteen minutes earlier. This had been rectified but the ship was now some way behind where it should be. To make matters worse, the rest of the squadron seemed to have gone to full speed so Tiger had to work up from the 12 knots she was making in order to merely hold station, let alone catch up and assume her correct station. Under his breath Hyde-Bowned cursed his squadron commander as being a hot headed fool - why did the flagship not wait for an acknowledgement of the signal? Why had they suddenly gone to full speed? These would be questions for another time he mused as all the while the great ship thundered ahead to reestablish contact with the remainder of the squadron.

Whilst the Tiger was busy attempting to catch up with the rest of her squadron the bridge of the flagship, H.M.S. Lion, was a flurry of activity and of tense anticipation. Ever since the turn had been ordered in response to a sighting of heavy smoke and the ship cleared for action the buzz of excitement throughout had been tangible. The ‘hot headed fool’ of a squadron commander, Rear Admiral R. U. Inept,  had ordered full speed ahead (to maintain formation the order was for 25 knots) and had also instructed the accompanying destroyer escort to follow at best speed to the rear and off the aft quarter on the port side. The last thing he wanted was for smoke interference across the great ships firing arcs. Inept was champing at the bit to engage the enemy as recent muted, but nonetheless rumbling discontent in the press, due to his handling of the battlecruisers, had cast something of a pall over what had thus far been a stellar career. Inept was destined for high command but even so, a telling victory would allay any fears as to his suitability as well as cementing his place in both society and public opinion.

The approaching column appeared to consist of three heavy ships with a small escort all heading due south at what appeared to be around 24 knots. Inept’s squadron was steaming north east and ideally wanted to come between them and their escape route back to German waters. It would be a race to make sure that did not happen.

With his command on the return leg of yet another fruitless sweep just outside of Norwegian waters, Konteradmiral Noel Von Dervall was delighted at the reports of heavy smoke coming from the South West. He reasoned that this was a small force as the speed it was travelling at meant that the so called Grand Fleet would be left far behind. This was an important consideration as he had no wish to engage with superior numbers of heavier metal than he had at his disposal. It would be battle cruisers and knowing the British ships as did was confident that he could beat them. Whilst his orders did not permit him to engage the enemy unless in overwhelming strength he was able to do so in self defence. The British were attempting to get between him and Wilhelmshaven so he would need to either avoid them entirely or to fight past them. The former held little appeal and so the order to engage the enemy was given. From the bridge of the Derfflinger the orders went out to the rest of the squadron as the three ships made ready for battle.

The Royal Navy aimed to cut off the German line of retreat and then rely on their heavier artillery to beat the Germans. Inept knew that H.M.S. Tiger would enter the fray at some point which would give them an additional ship advantage. Moreover, their weight of fire was superior as only one of the three German ships carried 12 inch guns whilst half of the British ships Mounted 13.5 inch guns. With the Royal Navy between the Germans and their base it would only be a matter of time before superior numbers and weight of fire would tell.

The Germans had no intention of being trapped by the British and in Von Dervall they had a commander that was not afraid to engage the enemy with his full force or required. Once his squadron was ‘base side’ of the Royal Navy he could dictate the course of the action as he knew that they would not dare follow the Germans too closely for two reasons. Firstly they would not want to be too close to the main High Seas Fleet base in case of a sortie by the fleet and secondly, there was always the risk of submarines or even minefields.

In either case, both sides would desire a speedy conclusion to any action. 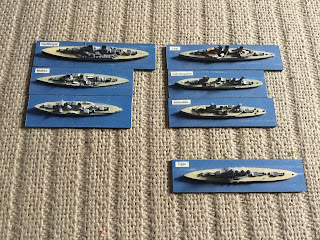 The combatants. 1:3000th scale ships by Navwar as painted and based by Alan Cook. The only change I will make will be to repaint the bases to my usual standard with the name and ensign added and undertake any minor touching up required.

The battle was fought using 1:3000th models and a slightly tweaked version of the rules from the Avalon Hill game Jutland. The firing rules assume a scale of  1 inch to 1,000 yards meaning a maximum daylight sighting range (again, within the game) of 24,000 yards or 24 inches. For movement a movement point equals 5/8th inch or 2.625 Knots.

For firing ranges I am going to use a scale of 2 inches to a thousand yards and for movement I am going to use the simple expedient of taking the ships maximum speed and dividing this by three to give the movement distance in inches.

The ships will be starting initially deployed at maximum daylight range (24,000 yards) with the Germans facing due South and the Royal Navy North East. Initially H.M.S. Tiger will be out of sight and off table, similarly there will be no light ships, destroyers or light cruisers, involved. All other rules remain as per Jutland although I am using the updated version which allows for secondary gunfire and a slightly different damage system.

Part 2 will see the action fought.

Great background fluff David and a fitting tribute to a fellow gamer.

Many thanks old chap! It was great to be able to get back into a game after what seems like an age!

The action was fast and furious and will be detailed in part 2.