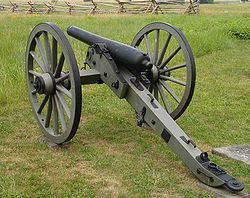 The above is the overall look I have chosen for the 30mm ACW artillery. The colour I have used for the carriages is Humbrol French Artillery green and was probably purchased the last time I painted any black powder artillery - some forty odd years ago!

I am going to be perfectly honest here. The six Spencer Smith artillery pieces in my ACW collection have caused me no end of problems. It is not because they are complex models - they consist of but four pieces being the barrel, the single trail carriage and a pair of wheels - but I have struggled with the colour scheme and, dare I say it, detailing. The internet has not made matters any easier as there is a plethora of pictures of Civil war era artillery pieces and many of these are quit contradictory.

I had gotten myself into a right tizzy and had changed my mind umpteen times about the colour scheme I would use - and bear in mind that this was the only part of the collection I was painting myself. In retrospect I was guilty of over thinking the situation - I tend to do this a lot - and was in danger of losing sight of the look I wanted to achieve. Old toy soldier and in the style of Kurz and Allison has been the guiding principle throughout this project and as long as I bore this in mind then all would be well. Old Painter Bob had interpreted the collection in exactly the way I wanted (albeit with no input from me as half the collection was a good few years old) so I had little excuse for dallying over the mere matter of painting half a dozen artillery pieces! After much ruminating I reminded myself of the old adage of  the importance of making a plan and sticking to it as closely as possible.

I am almost embarrassed at the way I allowed myself to trip over every obstacle that wasn't there with these models but I am happy to say I have settled on the scheme and last night saw me finish them all bar the final gluing and varnishing. In my defence I would say that it is probably some forty years or more since I last assembled and painted a black powder era field piece. Thinking about it I reckon it would have been when I assembled my Airfix Napoleonic 1815 Allied army....

Hang on, didn't he say that he had finished them before? I hear you say. Well, I had, kind of. Last night, and in the absence of any suitable superglue - the tube I purchased yesterday lunchtime was left at work.... - I took a long look at the models and decided that some additional painting was required. I painted the wheel hubs black along with the ironwork supporting the central part of the carriage where the barrel sits. I also painted a section of the trail black. The end result is a whole lot better to look at (you will have to trust me on this until the pictures are taken) and is certainly in keeping with the overall look of the collection. Tonight I will glue the barrels in place and tomorrow will see the varnishing. this weekend then, will see the grand unveiling and the all important photo shoot.

Thinking about it I am convinced that my well known aversion to painting is as much to do with being out of practice as anything else as I actually enjoyed the work last night despite my earlier misgivings. I suppose that getting into a routine when painting is important and that regular sessions will help to hone one's technique.

In a small way perhaps this will encourage me to tackle further brushwork other than warships and anything else that is non-organic!
Posted by David Crook at 08:45

The glue saga continues then! I'm sure we've all been there and left bits at work that we needed for that evenings session of painting, basing etc.

I don't worry too much about the right colours for artillery pieces as, as you have pointed out, there can be many contradictory bits of info out there. I go for a colour that is in the ball park, looks right with the crew and frankly that I like. Then it is just the 'simple' case of painting them, which is often the hardest thing to do!

There is a lot to be said for the truth of your comment! I don't know why I got so hung up about it but I did. The glue is safely packed for this evening and I am now at the officially excited stage!