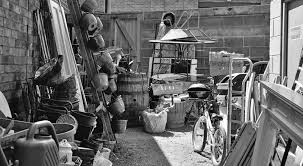 The man cave did not look quite as bad as the above - no bicycles or wheelbarrows were in evidence although the latter would have been useful moving Eric's collection around!

Another week and another round of sorting, planning and making decisions as well as some practical chores. The sorting (and practical chores) refers to the man cave as this was at one point doing a fair impersonation of Steptoe's Yard (see above)! The remnants of Eric's unpainted late 17th and 18th century and WW2 collection have been condensed down to four crates meaning that at long last I am able to actually see the floor. the numerous piles of figures that covered my table have all been accounted for and at long last I am able to move about freely without fear of stepping on something. I have even managed to set up one of my square grid playing boards (12 x 8 squares each of 3") so that I can undertake the first game using my 30mm ACW collection. SWMBO was mightily impressed when I mentioned that next weekend would see the dusting, polishing and hoovering of the man cave as well as cleaning the two Velux windows in the roof. It is long overdue!

I mentioned that I had reorganised my as yet unpainted WW1 1:2400th collection acquired for my Indian ocean project. I must confess that I really like the scale for naval games and Tumbling Dice produce some lovely models for a variety of periods. I am leaning towards using their models for the naval element of my planned ACW adventures. If truth be told they would also be a better option for the age of sail especially considering the rules I am likely to use. Which kind of leaves me with a minor dilemma - what do I do in respect of Black Seas? Have I made a mistake with this?

As usual with me there is no simple answer to this. The game itself looks fine but there is a part of me that is screaming "Seduced by the shiny side, you were!" Make no mistake the models are lovely but I am finding that all I am doing is viewing the whole thing through the lens of other rules sets and my own ideas. I shall put this to one side have a serious think. Should I decide not to proceed with it then I have no doubt that I would be readily able to dispose of the same. If I am honest I am struggling to see exactly when I would be able to get around to assembling, painting and rigging the models, much as I would like to. One to ponder methinks.

Aside from the Black Seas conundrum I have settled on the war of 1812 as being the 'Napoleonic' option I want to explore in more detail. It has much to commend it. The forces are small and recognisably Napoleonic looking with some easily paint converted options for uniforms in evidence. There is an interesting naval dimension that is low key in respect of the number of ships involved  making it ideal for solo actions. I can also make use of the terrain I shall be assembling for the ACW. Just how I am going to organise forces for this will be a post for another day as at the moment I am busy just reading up on the period.

Another task I successfully undertook was the sorting out and cataloguing of the assorted Tumbling Dice 1:600th scale figures I have been quietly squirrelling away. I have yet to do anything with them but I am certainly NOT going to be getting rid of them. In fact viewing the collection has reminded me that I need to acquire some additional bits and pieces to make the armies a little more nation specific. You may recall that my plan was to produce three forces - one in grey, one in brown and one in olive green or similar. the rationale behind this is that by adding nation specific pieces I could model a variety of armies. This is the plan long term so in the meantime I shall continue adding bits and pieces as and when the mood takes me.

The above pic reminds me of Carter's comment when first peering into Toot'n-come-ins tomb, 'wonderful thing's' or maybe not.

The man cave was in a proper state - reminiscent of the Augean Stables but without the smell - and I so pleased to have it looking relatively normal. Well normal enough to have a game in anyway!

I too see the War of 1812 as a nice and interesting way to scratch that Napoleonic itch: either that or the Peninsula. I prefer the former due to the small nature, some interesting units and uniforms as well as the naval element. As always too many ideas, too little time.

That was my thought entirely about the Napoleonic itch and I can also echo your sentiment of too many ideas, too little time!