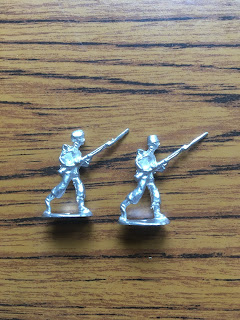 The figure on the left is the Spencer Smith Zoave wearing a turbaned fez whilst the chap on the right, by dint of some careful filing, is wearing a plain fez...you can probably guess where this minor conversion may be heading!

Now hear is the thing. Although the range of figures available from Spencer Smith ACW range is fairly modest it does cover most of the major types one associates with the war between the states. The Zoauve figure is a good example but whilst it is suitable for some of the units of this type it is not  viable for all - even allowing for a paint conversion. Purists will no doubt point out that the fact that equipment is probably wrong and the jacket is incorrect but they are Spencer Smith after all which means that they are close enough to look the part.

A couple of years ago I flirted with the idea of using the standard Union kepi wearing infantry type as Russians from the war of 1877 against the Ottomans but was reluctant to use the Zouave for the Turks for a couple of reasons. From what I can gather the turbaned fez was not used by the line troops although the Bashi Bazouks certainly did. Sadly the figure would not work for the latter simply because they should not have a back pack. The idea then withered away. 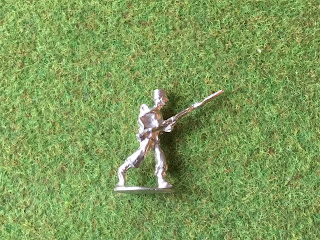 I was rather taken with this effort and realised that there would be a huge amount of potential for this chap. He could also pass muster for an Egyptian fighting the British or the Mahdists as well as the Russians in 1877, the Serbs just before that, the Greeks in 1897 and even during the Balkan War.

However, in between coats of paint I decided to see if I could file away the turban portion to leave a plain fez - the result of which you can see above.

If I am honest the prospect of converting multiples of this figure is not one I would fancy, simply because the tediousness of the undertaking but it is certainly worthwhile bearing in mind as an option. Perhaps a word in the ear of that very nice man at Spencer Smith may be in order....

A cunning plan re word in ear...

I had a feeling that this was the direction your thinking might be going in ... and if you can pursuade Spencer Smith to put a fezed figure (or several) into production, I think that it will be an ideal addition to their existing range.

As for the Russians ... well kepi clad ACW figures will certain fit the bill, although ones in peaked caps would be even better.

He is rather nice to look at but the prospect of filing several dozen of them is a little intimidating to say the least!

I will be in touch with Spencer Smith to see if there is any mileage in this - I will also do the same to one of the cavalry figures I have to see if that works.

A simple and effective conversion but, as you say, a lot of work.

At a conservative estimate I would probably need around a hundred or so which is taking it a tad far methinks!