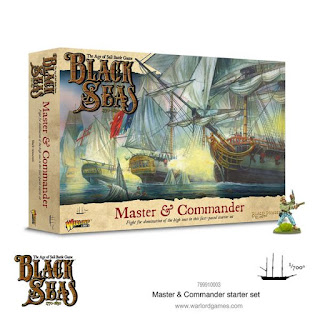 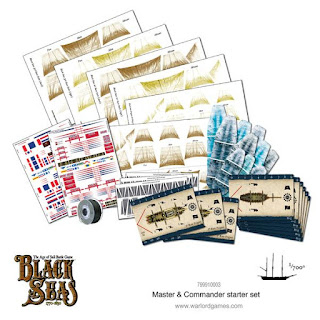 The contents - at least the ship markers and sailing paraphenalia 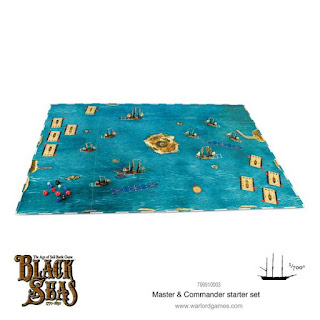 The playing mat that is also included 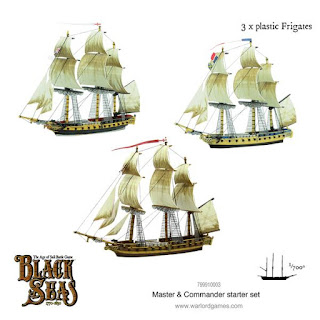 The base game contains the above three frigates.... 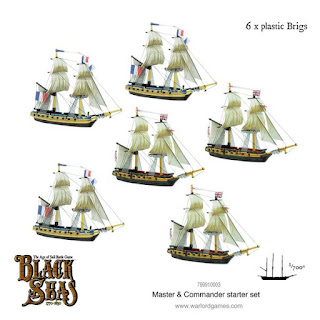 I have to hand it to Warlord games, or at least the chap I was dealing with! Yesterday saw the arrival of the box of Black Seas goodies by way of an apology for the Cruel Seas debacle. If I was being churlish I would say that something along the lines of "Is that it?" as the contents of the box, whilst very impressive, did not quite equate to the copy of Cruel Seas that I had been promised a year ago but one must be appreciative of the gesture - and that I am but probably more so by the speedy response.

The box I received contained a frigate sprue and also one of the two model brig sprues but more importantly all of the necessary sails, rigging and flags for completing some 6 ships (which coincides with the number of models I now have being a pair of frigates and four brigs) which is a solid start for what I need for a particular idea I am pondering.

I have to say that the models are lovely and look easy enough to put together. the challenge is of course the rigging element but as my old friend Mr Fox has often observed rigging a sailing ship takes time and is fiddly but curiously therapeutic - and he should know as he has produced umpteen 1:1200th scale age of sail warships. 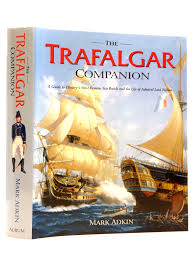 My library contains a number of books covering the period of the Napoleonic Wars from a navlal perspective although I do not profess to be anything other than enthusiastic amateur in respect of my knowledge of the period. Overshadowing the period from 1793 until 1805 is of course Nelson and there are no shortage of books about him and his exploits. At the lower end of the spectrum - and this is of course where my thinking around Black Seas is heading - frigates, brigs and sloops and their adventures have a huge advantage in that one does not need many ships for some challenging games and there is of course the potential for combined arms type operations, raids, convoy work etc. 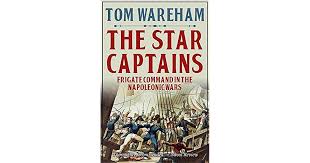 Inspirational and just what I need to stoke the fires of enthusiasm!

We are entering Hornblower and Aubery territory here for sure but naturally there are many historical originals to explore. The Star Captains by Tom Wareham (and also Frigates and the companion volume, Brigs and Sloops by James Henderson) is an account of the exploits of various frigate captains during the Napoleonic Wars and how they came to be. I first picked up a Kindle version of this book courtesy of an Amazon sale for 99p and now have a secondhand hardback version on order.

Where is all this going? Well, I certainly have a hankering to reuse the Ship 'O the Line rules once again and my old friend Mr Fox has a cracking set that he has evolved for the period. I am looking at actions of no more than half a dozen or so models a side so ships of the line will seldom feature although I can see myself adding a few for variety at some point. am looking long and hard at the Adriatic as a theatre of operations and I have a couple of Pocock titles that cover this.

As an aside I am hoping to have the ACW guns ready for the weekend - at least the painting will be finished, if not the varnishing - so any thoughts about Napoleonic Naval are currently at the 'planning and exploring options' phase but with the imminent release of Black Seas this may change.

Agreed re how useful Adkin's book is. I'd also strongly recommend 'Seamanship in the Age of Sail' by John Harland.

I will keep a look out for that although I would not be surprised if Mr Fox had it in his extensive library on the subject!

"We are entering Hornblower and Aubrey territory..."

What? No mention of Richard Bolitho? :)


Good to see that Warlord came through with some freebies in the end, even if not the Cruel Seas ones you were initially interested in.

I had forgotten about Richard Bolitho which is kind of strange seeing as how I have probably read more of them than the two mentioned 'back in the day'!

I raeckon that the acquisition of the starter set and perhaps one box of 74s will be more than enough for what I need.

I'm about to have a go at my WI freebie ships (yes I bought a couple of issues!) but I must admit to being a bit intimidated by the rigging!

Apparently there is a guide on the Warlord website so Mr Fox has informed me. In the base game you will get everything you need including the special thread they recommend although black cotton could work as well methinks.

My own selection of models will have to wait at least until the ACW figures are ready.

My only real knowledge of the naval side of things Napoleonic is the 19 and a half Aubrey novels which I keep promising to re-read they're so good. You could create a lot of interesting actions with just the ships in the box methinks. Look forward to seeing how this develops.

You have the advantage over me in that aside from watching the film of Master and Commander I have yet to read any of the Aubrey novels. I read some Bolitho titles back in the day and also a couple of Hornblower stories but other than that not a great deal. Mr Fox is always extolling the virtues of Mr O’Brien’s titles so I should really make the effort.

My plan is for low level actions and so he base game and the extras I have acquired should give me plenty of choice. Needless to say there is a cunning plan in the offing...