On the Forbidding Black Seas.... 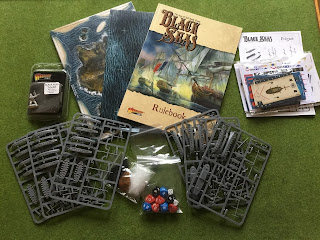 Rather sooner than I had expected my copy of Black Seas - the age of sail game from Warlord Games - arrived at the weekend. The following is not a detailed review as such, more like a first impressions upon opening the rather modestly sized box.

I have to say that at first glance it looks pretty darned good and it is obvious that a lot of thought has gone into it - particularly with the models. Contained within the box you get the following:

An A4 sized softback rule book
3 x Frigate sprues
3 x Brig sprues (2 models on each)
A bag of dice
A spool of black thread for ratlines
A 4ft by 3ft double sided seascape playing mat (made from glossy paper) with one side being 'deep' water and the other for coastal waters and, as you can see in the picture above, marked with a grid of 4" squares (marking just the angles).
A bag of coloured cotton wool/kapok style material for smoke etc
Ship cards and movement devices
Thick card terrain pieces and damage markers
Assembly instructions for the models and cut out sails and rigging
Sheets of flags for the Royal Navy, France, Spain, USA and some generic pirate style ensigns.
A 28mm figure - I am unsure if this is a limited edition or not

The models are lovely and I like the way that figureheads and stern galleys can be varied (there is a selection on each sprue) to suit specific ship types as required. Assembly looks straightforward, even for me, but the rigging may be a little fiddly. Mr Fox has advised me that the models have some clever touches to help with this process - I trust him implicitly on this has he has a lot of experience undertaking this tricky task, and to spectacular effect!

The rule book contains plenty of information about the ships of the period, the different types, the rating system and also identifies the names of various ship parts including sails and masts etc. More than enough information for the landlubber taking their first steps into the water so to speak! There are a number of scenarios, some historical background from the American Revolution through to 1815 and includes the war of 1812. The rule book also includes some background to each of nations featured and mention of some of their most famous ships - which happen to be available as 'personality' models. In short the rule book follows the modern approach of rules, background and eye candy in one volume. A separate play sheet would have been nice but no doubt one will be available, if it isn't already, on the Warlord website.

I have to say that I was very taken with the gaming mat, especially as it features a square grid. The only problem (and this is very much a personal thing) with it is that the grid has 11 x 7 full sized 4" squares with a border of 2" by 4" half squares. Although the rules are certainly not grid based it does make for a cramped fighting area if one is using a grid - as I will with Fighting Sail, the old SPI magazine game.

So what does this all mean for me? Well, I have mentioned previously that I have had a number of ideas for some small scale age of sail gaming and I reckon that this may well provide the raw material to do so. The areas I am looking at include the Adriatic and also the war of 1812. There is also the operations against the Barbary Pirates....

There is mention of a Xebec as well....

I am swithering at the moment..

Another new project, you're worse than Postie!

This is not really a new project as I have fought Napoleonic naval actions since the late 1970s. The method of execution may be new but the thought processes are well seasoned.

A xebec, eh? Gotta have one of those to 'redo' Jack Aubrey's fight with his 14-gun sloop of war (a brig model will do) against a Spanish xebec frigate).

"The pleasant thing about fighting with the Spaniards, Mr Ellis,' said Jack, smiling at his great round eyes and solemn face, 'is not that they are shy, for they are not, but that they are never, never ready."

The Aubrey series are on my to read list for sure!

You know me so well old chap!