Originally I had intended this post to be the grand finale in respect of the 30mm ACW collection but seeing as there will be further additions in due course I decided that calling it a WIP was more appropriate. In any event here they are, the two forces of 30mm Spencer Smith ACW figures as painted by Old Painter Bob and rebased, reorganised and finished off by yours truly.

Crude the castings may be crude and with glossy coats, plain painted individual bases and not a hint of shading or highlighting but they look so evocative.

"An elegant collection for a more civilised time". 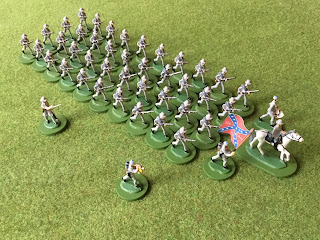 Confederate Infantry on the march.... 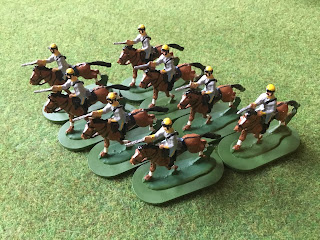 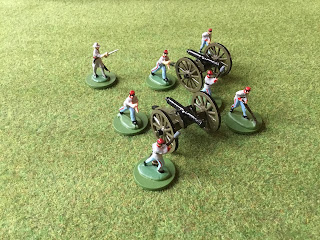 ....artillery in support (there is another gun). 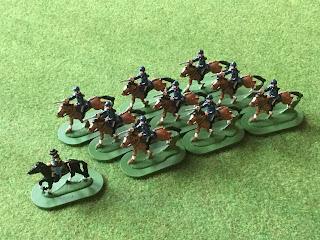 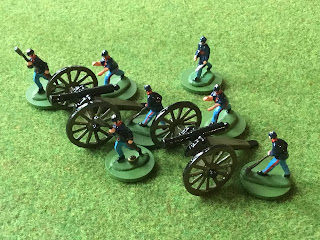 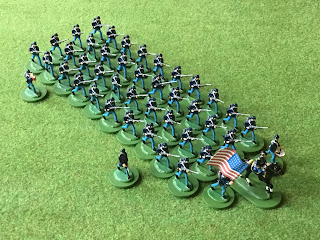 ....and infantry marching to the sounds of the guns.

Once again I must extend my thanks to Old Painter Bob for helping me to realise a project that may have withered on the vine if left to my own devices. As mentioned in my previous post there will be some further additions to the collection but if I am honest there will not be very much as this is probably about two thirds of the entire amount I will need.

In the meantime though, I want to get some games in and also to get the purple prose genes flowing again!

You have been warned!
Posted by David Crook at 13:14

WOW! I knew that these figures would look good when they were finished ... but they are even better than I had expected. I am extremely jealous, especially as I know that you are going to get a lot of great use out of them. I look forward to seeing them featured in a forthcoming battle report.

I am delighted with them and all credit to Old Painter Bob for the way he has painted them. Seeing them in all their glossy glory was a quite an inspiring sight and I am looking forward to getting them into action soon.

I did have some doubts about the individual bases but I am glad I persevered with them. I shall make some movement trays in any event.

I love the 'Old School' look of these, which have a charm of their own. Sometimes less is more. Can't wait to see them in action, especially Rebels & Patriots which I helped playtest.

Less is definitely more with these figures and I plan to use Spencer Smith for a couple of other projects I have in mind. I did not know you were involved with the testing of Rebels and Patriots - they are a great set of rules and are certainly going to feature with this collection!

I know Michael from 'The Pikemen's Lament' playtesting and helping him with his demo games at Salute. The 'AWI Loyalists Legion' list is my work, for better or worse! A great set of rules and I think the best of the series, all of which give great games though.

I am fond of all of them and now have the material to try them out for myself.

I will take a look at your list to see where that takes me....

It is certainly this season's colour!

I can see why you are fond of these figures, David. The figures look animated and lively - just itching to get into battle.

The castings are truly horrible but they have a wonderful sense of movement and are nicely proportioned. the funny thing is that 'back in the day' I would never have considered using these chaps as they appeared too old fashioned and crude. Over the years I have grown fond of them and they certainly suit my needs admirably.

They are that for sure! Now to get them into action.

I am so pleased with these and the great thing is that the entire collection when finished it will not take up much space but will give me plenty of variety and options for all manner of games.