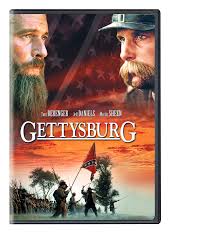 Looks good but I am really not enjoying the soundtrack....

I have finished the varnishing of the six 30mm artillery pieces for the ACW Spencer Smith collection!

Yes, you read correctly, I have finished!!!

This means that phase one of the project is at an end and I can't tell you how pleased I am with the outcome and overall look. I shall be positing the pictures over the weekend but trust me, they are glossy, old school and a fitting tribute to the style of Kurz and Allison.

To get me in the right ACW frame of mind I decided to allow myself the luxury of watching the Director's cut of the film Gettysburg. Now I know that this was in the East and my interest is Western facing but I wanted a dose of ACW flavour that was not Gone With the Wind! I have seen the original version some years ago but not the Director's cut. I should extend a big thank you to Mr Fox for the digital download code for the film using the now defunct Ultraviolet platform. As an aside that portion of my digital film library is now safely ensconced in Google Play. I have not seen Gods and Generals - the prequel to Gettysburg which has less than impressed most viewers by all accounts - so may well look to do so in due course. I am very early into the film - subtitled in a rather tongue in cheek way by some gaming acquaintances as Gettysburg: Men in Beards - but already I am less than thrilled by the Randy Edelman soundtrack. One wonders what John Williams would have done with it....

There will be three further stages in the ACW project but for now I have sufficient to get some Portable Wargame or Memoir of Battle style games in. I could even tackle Rebels and Patriots if I wanted to so there is a good deal of flexibility in the collection. the further stages are as follows:

Ships. I am more or less settled on using Peter Pig 1:600th scale models for purely naval actions but I will build some cartoon style warships for combined arms style games. These will be very generic and I reckon that i will need no more than half a dozen models in all.

Additional units. Each side will add a unit of Zouaves and a unit of sharpshooters. I already have a painted Zouave unit for the Union but I want to add one for the Rebels.

Of the three stages above I suspect that the first two will be tackled first and probably simultaneously as it will be a collaborative effort. the additional units will be something for next year methinks.

As I have spent a lot of time rambling on about my small contribution from the painting perspective to this project the photo shoot will be picture heavy and rambling light!

Now to plan some games!

Great to hear that you've finished your forces, subject to the 'normal' additions we all like to add! Certainly looking forward to seeing the pics over the weekend.

As an ACW 'virgin', I did enjoy Gettysburg and am currently enjoying the Ken Burns 'The Civil War' documentary series on Netflix. Very informative and some useful 'photos of the troops and battlefields. An area I've gamed a little, but it has still to really grab me, but I've still got plenty of time for that to happen.

I've been tempted by the Peter Pig ships to use with Bob's rules, but might go even smaller. Haven't made my mind up yet. I need to make a board first, which will largely determine ship size.

Many thanks old chap and I hope you will enjoy the pictures when posted.

The Ken Burns series I saw a few years ago and it is excellent. You have prompted me to add this to my Xmas list!

The Peter Pig ships are very nice and if you choose to go smaller then Navwar are a good and inexpensive choice in 1:1200th or you could look at the 1:2400th scale range from Tumbling Dice.

I will be using Peter Pig as the models are great gaming pieces and are pretty robust.

Ah, the soundtrack to Gettysburg. Were you also irritated by the constant music? Hardly a scene without 'significant', 'dramatic' or 'moving' music. It's a shame because most of the time it didn't any signposting. Good film despite that though.

Luckily the shooting is cutting out a lot of the music! It just seems so disjointed and 1980s - and not in a good way!

Great film though - I am currently at Little Round Top.

Good scene that, the Little Round Top. Nice depiction of close order infantry tactics in the black powder era.

Oh, and just had a flashback to the post-Picket's Charge scene which reminds me of the 'go again sir?' scene in the Charge of the Light Brigade.

Luckily the gunfire has drowned out the music!