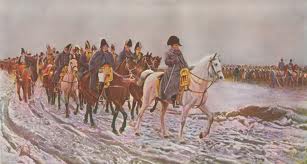 Napoleon no doubt thinking about warmer weather somewhere else - this was of 1814 but is usually always associated with 1812 and rightly so, capturing as it does some of the wintry bleakness of the dreadful retreat, at least in its early stages

From a wargames perspective the chances are that almost every year at some point will bring an anniversary of some campaign or event that strikes a chord and invariably generates a few ideas for games and projects etc. 2012 is for me one such year. For my own particular palette the anniversary calender includes the following major campaigns:

You could easily add the Turkish-Italian war of 1912, the war with America and of course the battle of Salamanca in Spain.

The two I have mentioned are favourites both old and new as the Napoleonic Russian Army of 1812 was my first ever painted metal army (now in the collection of Eric Knowles) dating back to the late 1970s and early 1980s. The Balkans are a much newer interest for me but a significant one all the same. Over the course of the year both of these campaigns will feature from a gaming perspective as I shall be undertaking battles using my block collection for each.

2015 will not only see the 200th Anniversary of Waterloo, but the Centenary of the ANZAC Landings at Gallipolli too.

Very true indeed - ANZAC day will be a special one then!