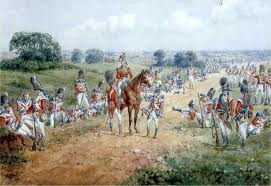 After the less than satisfactory outcome to last weeks game I have decided to replay the action using a little more forethought and a different set of rules. I have changed the size of the forces so the allies are smaller and the French larger and the rules of choice will be the latest version of Bob Cordery's 'Memoir of Battle' - a brilliant combination of Command and Colours, Morschauser and with an added dash of Cordery thrown in for good measure. The report will follow tomorrow and I promise to keep the purple prose to a minimum (and no, I did not have my fingers crossed when I said that....).
Posted by David Crook at 16:31

Best of luck. I was wondering where you got the picture from.

A large number of my blog pictures I often get from google - just type 'images of 1815' and you should find the same.

OK, Dave, but if you leave out the purple prose, it's not going to be as much fun to write...

The trouble is I really enjoy the write up and so the purple prose may well win out in the end!