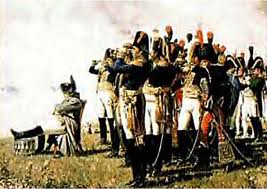 Napoleon at Borodino, accompanied with his glittering staff although the man himself looks bored with the whole thing!

My first ever painted army was a 20mm Airfix plastic 1815 Allied army organised as per Bruce Quarrie's Airfix  Magazine Guide: Napoleonic Wargames. I fought many a dramatic action using those rules against my old fighting partner, Paul, back in the mid 1970s. When we decided to move up into metal figures another gaming friend of mine had already usurped the British army (his elder brother was a very talented 54mm painter specialising in the Napoleonic British army - to this day I am unsure if my friend painted all of his 25mm figures himself!) and so with Paul sticking with the French I needed to trawl around for something different.

Inspiration came from a number of directions.1812 by Anthony Brett-James was a collection of eye witness accounts and diary entries in a single volume covering the invasion and the retreat and I had occasion to borrow a copy from the library (mainly because David Howarth's book - A Near Run Thing covering Waterloo was out on loan and these two books have served me well over the years for sheer inspiration value) and was gripped. A quick read of the Russian army section of Bruce Quarrie's book and I was hooked. Enormous gun batteries, Cossacks and infantry that would not lay down seemed ideally suited to my modest tactical ability and so a Russian army of 1812 it would be. The figures I used in those early days were a mixture of Hinchliffe and Tradition (they still 25mm figures than and were still at 188 Piccadilly) and I managed to complete two battalions on infantry in greatcoats, two battalions of grenadiers, two of Moscow militia, a unit of Cuirassiers, some Cossacks and a couple of artillery batteries. Chris Hardman painted a unit of Hussars to add to the collection. Parts of it saw action but the whole lot was sold to Eric Knowles to finance the first of mt naval forces just after I had moved to London.

The years rolled by  and so whilst I have dabbled with Napoleonics on and off over the years it has never been with any serious intent until now. 1815 was always my campaign of choice (meaning that most Napoleonic purists would dismiss me as a mere amateur!) and still is bit now the net has broadened to cover from 1812. I suppose because by then the French, whilst formidable, had shot their bolt to an extent as the rest of Europe had their measure.

The only new addition to this is the Egyptian adventure at the earlier end of the wars and that is a campaign I would love to try at some point.

The rules I have used and are currently tweaking are based on Bob Cordery's Memoir of Battle (which are designed for the latter half of the 19th century) and the early test was great fun to play. I was particularly pleased with the fact that the tweaks I had applied beforehand seemed to slot in almost seamlessly with no obvious detriment to the game play. Undoubtedly this is a testament to the soundness of the original concept; fashioned and honed as it has been. Aside from the Napoleonic wars I am thinking that the revised set would also work for the second half of the 18th century and so in due course I will investigate further - especially as  I have a plan for something rather special in this respect....;-)
Posted by David Crook at 20:38