The legendary bluesman in a cheerful frame of mind

Ok, so I know it is not classic blues as played by Muddy Walters, Howlin' Wolf, Johnny Lee Hooker etc but the idea is broadly the same! 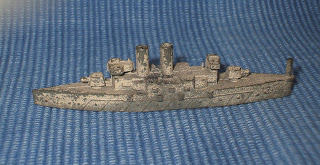 The offending model, of which I have but a single example - note the obvious large calibre guns on each corner of the superstructure.

The warships in question refer to my collection of Minifigs/BMC style 1:2000th scale models and my plan to drop cast those models that I need more of. I have hit a bit of a problem. In a nutshell, the model that I thought was a Canopus type pre dreadnought (and therefore as near to being a standard configuration for the type as you could get) is in fact nothing of the kind. On closer inspection it appears to be a King Edward VII class battleship as it has a distinctive 9.2" gun on each corner of the central superstructure. Although it has the symbol 'B3' on the stern it appears that this was a 1950s era copy of the original BMC models incorrectly described as a Canopus. This is a blow but one I have given some thought to along the lines of some fairly drastic remedial action.

Swiftsure and Triumph - and the potential saviours of my cunning plan!

Take a close look at the model above - that of HMS Swiftsure, the second class battleship taken over, with her sister, HMS Triumph, and completed for the Royal Navy. They have virtually a typical configuration for the pre dreadnought battleship type - the central superstructure with a pair of funnels atop. There is plenty of space on the top of the central superstructure to add a further funnel if need be and this was something I was considering going forward for representing different classes but then, it came to me (and this is the drastic part).

If I removed the funnels entirely (Smokestack Lightening if you will....) and ensured that the top surface of the superstructure was suitably 'flush' then the resulting casting would need to have these added afterwards. This would be no problem and plastic tubing in various suitable sizes is available for that very purpose.

Why bother? Well, simply put, by having the freedom to position the funnels where I choose, not to mention the quantity, I can represent any number of battleship types, albeit in silhouette. There is room for three funnels easily and so this would allow some of the German types to appear.

The cruiser being considered for some novel surgery

The same idea can also be applied to some of the cruisers I own and so that is also an option I will explore further. It does mean that a couple of originals will be sacrificed for the greater good though - the needs of the many outweighing the needs of the few....

Sounds like a great idea. If you mount the funnels in sets (pairs or triples as required) on a bit on plastic card you could you use the same model to represent different ships (or the same ships under disguise like SMS Emden with a dummy funnel).

That is a really good idea and has also given me another for good measure!

Funnel Magic, very cunning and would work in most cases methinks

As I am quite short of much in the way of variety of types this seemed like a good idea to max out the mileage of those I do have.

More to follow as the idea develops and yes, fake funnels do feature historically so there is a precedent!

Great idea, David. Simplicity itself once explained, but takes a cunning mind to hit upon it. :-)

The basic idea is a sound one I think and also as long as you are not too fussy about detail! Having said that if you are using these models then detail is not something you have to worry about anyway!

I am sending the hulls off to be looked from a mould making feasibility perspective and will report back in due course.

Cunning mind eh? Makes me sound like some kind of master criminal - I rather like that and so you will secure a high place in my new world order....;-)