The write up for this game will be a little different from my usual approach for a couple of reasons. Firstly, the game was very much a play test of the latest version of Memoir of Battle at Sea 1890 to 1905 (with thanks to Bob Cordery for the loan of the title!) and also was fought using unpainted models. Apologies in advance then for the less than flattering pictures!

For inspiration I have used the River Plate action from WW2 but with a pre-dreadnought twist - the red fleet consisted of a Lord Nelson class battleship whilst the blue fleet had a pair of Highflyer class cruisers and a Drake. In terms of the game the ships were rated as follows:

The gun ratings are based on the number of combat dice rolled at the range to the target ship and they decrease  in alphabetical sequence. Heavy guns are rated A to E, Medium guns from F to I and Light guns J to L. Heavy guns have a maximum range of 5, Medium 4 and Light 3 - which is also the range for torpedoes.

Firing is very simple. Heavy and Medium guns may only fire in the gunfire phase (which is the first phase of the turn) whilst Light guns may fire during the gunfire phase and in the Torpedo Attack phase. A 6 scores a hit with a 4 and 5 being an additional hit - provided at least one qualifying 6 has been scored from the current salvo. Light guns firing at Cruisers or Battleships or Medium guns firing at Battleships need to score hits in pairs. Battleships firing Heavy guns at Cruisers count 5 and 6 as qualifying hits. Any hits scored can be applied at the owning players discretion against the hit points, speed, or weapons. A hit applied to a gun type reduces the letter to the next one e.g. A to B, C to D etc. Torpedo hits  can only be applied to hit points or speed.

The action commenced with the battleship, having no doubt returned from a raiding foray, being intercepted by a cruising force of the enemy. In order to minimise the effect of the heavy guns being concentrated against a single target the cruiser commander split his force into two - the pair of protected cruisers to the north and the armoured cruiser to the south of the enemy battleship.

The opposing plans were very simple - the red fleet needed to inflict as much damage on the opposition as possible (at the very least slowing the enemy ships down sufficiently so that an effective pursuit would be impossible) in order to make good their escape whilst the blue fleet needed to sink or seriously damage the raider so that the heavier elements of the fleet could catch up with the action and finish off the battleship. 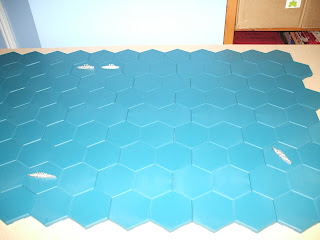 The end of turn 1 and with continued apologies for the unpainted models in use!

The opening turn saw the blue ships heading straight for the red and maintaining their course and heading in order to assail the red ship on either beam. The red ship responded by lining herself up to do battle with the largest of the blue ships - the armoured cruiser - whilst turning towards the pair of protected cruisers.

Turn 2 was virtually a continuation of the opening move but with the difference in that the battleship and the armoured cruiser were close enough to exchange long range shots with their Light guns (at range 3 either ship could roll but a single d6 and both missed).

Turn 3 saw the battleship and the armoured cruiser open fire with everything they had at a range of 3 and despite having the superior weight of guns the red ship missed entirely whilst the blue ship was able to score two hits - one with her medium artillery and one with her light. The battleship opted to take these hits from her hit point total of 10 reducing this to 8. The movement phase for the turn saw the armoured cruiser cross to the rear of the battleship whilst the two protected cruisers turned in to face the foe. 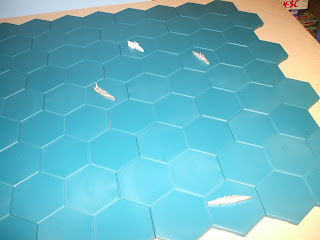 Turn 3 - whilst the armoured cruiser keeps a healthy distance after her bush with the battleship her two lighter compatriots take up the gauntlet (the shell splash markers are from the game Mastermind and serve merely to illustrate the action).

A swathe of Light guns opened fire during the Torpedo attacks phase with the battleship missing her nearest opponent whilst suffering a long range hit from the furthest of the two protected cruisers. Both the battleship and the nearest protected cruiser elected to use torpedoes  with disastrous results for the blue fleet as the protected cruiser was torpedoed and suffered four points of damage. Captain blue opted to take 3 hits from the hit point total of 5 leaving 2 and to reduce the ships speed from 3 to 2.

Turn 4 saw the battleship open fire with all her artillery against the battered protected cruiser but only managed to score but a single hit - much to the red Captain's disgust and the blue Captain's relief! The armoured cruiser fired speculatively at long range but failed to secure a hit.

Turn 5 saw the battleship again give her full attention to the damaged cruiser and this time her persistence paid off as she managed to score a further three hits which the blue Captain used to reduce his hit points by 1 (leaving but a single remaining point of damage) and his gun dice by two from J to L. The ship was riven with shell holes but was still able to make a speed of 2. The other cruiser kept a healthy distance and headed around the rear of the battleship whilst he armoured cruiser attempted to take up the fight once again.. Some long range Light gun salvoes were exchanged but with no damage inflicted by either side.

The damaged blue cruiser headed away at best speed from the action - her temerity in attacking her larger and more dangerous opponent being unsuccessful. 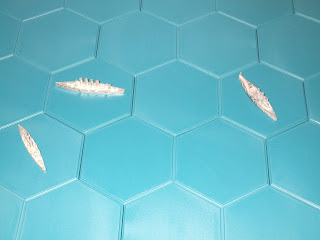 Endgame - The Red battleship about to hammer the blue armoured cruiser in company with the sole undamaged ship on the table.

At this point the blue fleet conceded the action as with two heavily damaged cruisers (one in imminent danger of sinking) she was unable to prevent the escape of the enemy warship.

Reads like it was a fun game for the BB.

Nice report - and my eyes can't tell that the ships are unpainted.

A very interesting scenario that shows that your rules work as well - if not better - than expected.

It was good fun and I suspect that had the blue fleet been a little more thoughtful in their approach it may well have turned out differently. As it was they attacked piecemeal and were made a meal of in pieces.

The rules are a homebrew set based loosely on Command and Colours with a generous dash of Cordery for good measure.

The fierce lighting has made the metal look grey but when these have their proper plumage they will look a lot better!

There are a number of minor changes in hand but overall I was very pleased with the outcome. the River Plate scenario is a great one for a challenge!

It was really good fun and captured the all important feel quite well. There are a couple of minor tweaks I have incorporated but I think they are now pretty much the done deal.