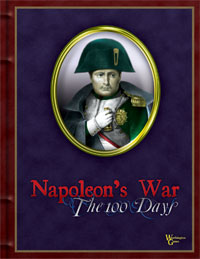 The initial release - covering a particular favourite campaign of mine!
The game I shall be putting on over the weekend will be using my blocks on the same mapboards I fought Keder Sirt on from the Axis and Allies miniatures game. The period will be the Napoleonic Wars and the rules will be those from the board game of the title.

The system used is a variation of that designed by Richard Borg and used in his Command and Colours games including Ancients, Napoleonics, Battle Cry and Memoir 44 (not to mention Battle Lore). The biggest single difference is that command cards are not used. Instead each side has a number of Action Points (rather like DBA and similar) that are varied based on a dice roll. The dice used are also standard d6 rather than the more exotic icon dice.

These changes have the effect of making the game seem more like a war game and having played and enjoyed both systems I would say that I prefer the version without the cards but it is very much a personal opinion. The games featured in the two sets available (and the two sets of expansion map boards) are actual battles and so there is no variation in respect of the terrain available. The initial release covers the 1815 campaign whilst the second covers the usual European angle - Austerlitz, Marengo, Borodino and Aspern-Essling. the two expansions are more of the same except that expansion pack two is devoted to the war with America in 1812. the game pieces are hard plastic figures, rather like in Battle Cry and Memoir 44 and are both basic and generic (and roughly 15 to 20mm).

The game I shall fight will be a hypothetical action and, for a change, will probably feature the British and the French. The rules are suitably period specific and capture the flavour of the era as I hope my game will demonstrate.

I have even made sure that Brigadier Gerard is fully loaded up on my ebook reader - just to stoke up the Napoleonic fervour!

I may even have to watch (for the umpteenth time)  Messrs. Steiger, Plummer, Hawkins et al for some real 1815 overload!
Posted by David Crook at 20:34

Very interesting, David ! I look forward to hearing more about this system.

And kudos on your selection of Brigadier Gerard, I too have a real fondness for the brave but none-too-bright hussar. The stories make for fine reading, written with panache and humor.

I am a huge fan of the gallant Brigadier and of the exploits of the Hussars of Conflans - very atmospheric and inspirational; not to mention a really entertaining series of stories.

You cannot go wrong with ACD.

I've played quite a bit of Clash for a Continent (The French Indian War) and For Honour* and Glory (The War of 1812). They are both games preceded Napoleon and they are not bad. I prefer C&C:N myself.

One wrinkle I added was that the Generals seemed a bit useless, I'm not sure what they are like in Napoleon. Rather than giving the player a set of points (typically one per General) plus a d3, I used a d3 and a General was allowed give one point to a unit attached to him or adjacent.

*You'll have my U when you pry it from my cold dead hands.

I only have ACD on my ebook as I foolishly lent my hardback copy to somebody some years ago and it has never been seen since.

The Clash for a Continent and the 1812 games were very good but felt somehow a little sterile to play - much like Napoleon's War to be honest although using a more C and C derived set may make a difference. The C and C Napoleonic game is very nice (I own a set) but you have to wonder at how much a full set up would run to once they have covered all the combatant nations - especially if the Ancients set is anything to go by!

Well think about it this way. I took delivery of my French Horse Grenadiers today, which completes my basic set of Napoleonics.

I'm cataloging the collection at present for insurance purposes, which makes for some interesting reading.

My biggest single insurance listing would be for my books as I only own 10 painted figures in total....;-)

(plus several tons of unpainted!)

PS Any pictures of the said HGs?