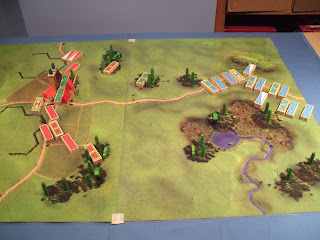 The Battle of Artois - the French are making full use of the road from the frontier
A scratch formation of British and Hanoverian infantry, supported by some cavalry, a battery of foot artillery and a detachment of the famous 95th Rifles are tasked with holding the vital Belgian village of Artois against the advancing French. The Duke had ordered them to hold for at least half a day whilst he reorganises his army to meet the enemy.

The French have crossed the river and an advanced detachment has marched forward with all speed with the intention of capturing the village, thereby securing the vital crossroads.

Each side was by coincidence roughly of the same composition and consisted of six units of infantry, three skirmisher detachments (for the allied force one of which was the famed 95th Rifles), two cavalry units (one of the French units was of Cuirassiers), an artillery battery and of course the respective commanders.

Brigadier Hyde-Bowned surveyed his motley command of raw recruits, old hands and every shade in between with something akin to disdain coupled with resignation. Two days before he had been enjoying a long and leisurely lunch at his club when a string of orders had arrived and now he was tramping across Belgium with a rag-tag command and no clear idea of what on earth he was supposed to be doing. Not only that, Napoleon was now on the march and so he fully expected the full weight of the Grande Armee to be falling on him and brushing his minuscule force to one side with no more effort than one might expend in swatting a fly. As far as he was concerned it was little short of madness attempting to defend this position whilst the full weight of Napoleon's army was heading his way - and he had been foolish enough to point this out to the Duke. Surely it would be better to fall back on the main body of the army and meet the Corsican Ogre with everything the Duke had?  "Damn your impertinence sir, let my order be obeyed!" had been his stinging reply. The recollection of the Duke's scathing comment was still seared into his memory and so he had to make the best with what was available - at least until the Duke was ready.

Perhaps the rebuke he had received from the Duke had served to stiffen his resolve or perhaps he had realised that the stage of history had beckoned; either way Hyde-Bowned determined, despite his misgivings, to seize the day and to make his mark. 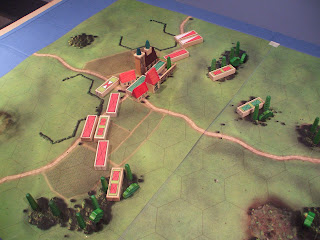 The Allied deployment around the village of Artois - note the position of the rifles in the van
His dispositions were simple, conservative and as good as they could be under the circumstances. He garrisoned the village with the Hanoverians and strung out the remainder of his infantry in a line from the outskirts to a small wood. The artillery was in the centre of this line and the far side of the village had the remaining infantry unit and the cavalry. The light companies and the rifles were placed in some small wooded areas either side of the road leading to the frontier. The rifles were deployed furthest forward and so would be able to harass the enemy at a distance and hopefully use up valuable time as a result of their action. It was a compact deployment and when Hyde-Bowned surveyed his small command fully arrayed for battle his confidence, thus far at a low level, rose with the Belgian sunshine.

All he had to do now was to wait on Napoleon's pleasure and so the coming hours would be a test of patience as much as a trial of arms.

With much humbugging the French army under Napoleon have crossed the frontier with Brussels firmly in their sight. Speed was of the essence and so the Emperor assembled a small and fast moving task force ordered to both locate the main body of the allied army and to seize if possible, the small but vital village of Artois. It was perhaps indicative of the malaise that had gripped both the Emperor and the Grande Armee that the orders were both unclear and contradictory to an extent. The force was too small to force a decision if any major resistance was encountered and too large to avoid keeping out of trouble. This was the conundrum facing the young French commander - Brigadier Jacques De La Salle.

As a veteran of many years service De La Salle was under no illusions about the complexity of the task facing him. He was very wary about facing the accursed English in any kind of firefight on even terms with his unwieldy force (had it been his decision he would have taken only a brigade of cavalry and some horse artillery) and so chose to interpret his orders as meaning that he needed to find and fix the enemy rather than trying to force a conclusion. Technically he would still be following the Emperor's orders but silently he cursed the shoddy staff work that left him in such an unenviable position. Such confusion would never have happened had Berthier still been around. He knew full well that the Emperor would need every man available to deal with the Duke's men when it came to the climax of the campaign and so was not about to waste the lives of any of his command in a futile gesture against the English muskets. 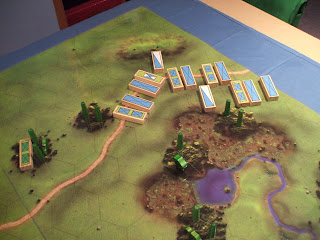 The French advance - note the men of 95th rifles lurking in the small wood aside the road
Everything was going down the one road and in the interests of both speed and security De La Salle made sure that all his skirmishers were deployed to shield his infantry. Long experience fighting the English had taught him that usually it was not the troops you could see that were the problem - it was usually the ones that appeared from nowhere that caused the damage. Unpleasant memories of reverse slopes and sudden ear shattering volleys from cover made every obstacle, every clump of trees, every farm a potential threat so De La Salle was desperate to avoid any untoward surprises. It was with this in mind that he made sure that all his light companies were deployed to shield the main body. His cavalry operated on either flank of his main force and could be used as required - either offensively or in support of the infantry.

Speed was of the essence because if the village was unoccupied then De La Salle was confident he would be able to hold it until the main army arrived but if it was not then he would be able to deploy to cover the approaches; thereby fulfilling the letter, if not the intent of his orders.

The scene was set and as the early morning sun rose high on the horizon, bringing with it the promise of a long and balmy summer's day, so the two forces prepared for action; the weight of expectation and destiny laying heavily on the shoulders of the two commanders.

What rules are you using??

What are the black shapes on the left hand side of the first image?

Napoleon's War by Worthington games. It is a miniatures based boardgame but I am using my blocks instead.

I think you mean the hedgerows. They have come up very dark in the picture but are in fact printed on the map.

Once I have acquired the remaining items for my Hexon terrain project I shall be using that instead - the maps are purely for convenience.

Part 2 should be this evening.

I will not give too much away at this point!

The blocks I am really pleased with and on the Hexon terrain they look even better - especially as the hexes are larger.

I'll second (or third or whatever) the comments about the visual impact. It's stunning!

This ain't your father's Waterloo Boardgame.

I am really pleased with the simple and neat looking games the blocks give and once I complete my Hexon terrain collection they will look even better!

It may not be to everybodies taste but given that even the most devoted figure gamer would have to look at a map at some point it works for me (and obviously did for Reiswitz and his gang!).

Once I have my full Hexon set up it will look even better.

Stirring stuff, DC - a great narrative and intro, as well as an excellent looking set-up - just what your blocks were made for - can't wait to see further reports as the game progresses.

Both commanders seem rather on the disgruntled side from your description - although I'm not sure that is actually a command and control category!

Only thing that occurred - how do you differentiate Light Cavalry from Heavy in terms of the block labels? - prompted by your inclusion of Cuirassier in this one.

Hmm, this looks quite tasty! Don't go getting me distracted from my list for January David ;)

Distraction is my middle name - actually it is Roy but you get my drift....;-)

It is funny you know - the blocks seem to come alive on the table top as they look fairly nondescript in the box they call home.

I only have a single cavalry style label as they are designed to be used with a roster and so any 'weight' is recorded there. A dull alternative I know but it works well and within my gaming it is perfectly OK to ask what the opposition troops are - just not their morale!

Yes they are both disgruntled - Hyde-Bowned because of his stinging rebuke from 'Old Nosey' and De La Salle because he is unhappy at the shoddy staff work and ambiguous orders.