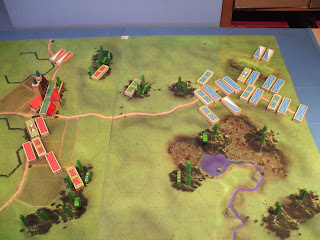 Seconds out, round two!....Note the increase in the size of the French force

Well that was much better! It just goes to show that the seven 'Ps' of my earlier post are worth their weight in gold when used properly (or even at all!). 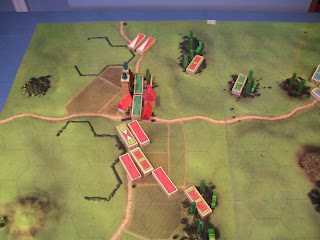 The set up was broadly similar to my earlier game but the forces had been adjusted somewhat. The allies lost an infantry unit whilst the French gained three more; together with another cavalry regiment and an extra gun battery. The allotment of total strength points came out at 54 for the French and 36 for the Allies meaning that the break points were 18 and 12 respectively. The rules were primarily Bob Cordery's 'Memoir of Battle' but with some in house tweaks applied - more of which later. The break point idea is loosely based on the idea of an exhaustion level and features in Volley and Bayonet by Messrs. Chadwick, Novak and others. Essentially when a formation has lost the number of strength points indicated by its break point level it must then beak off the action. I picked 33% as a test figure but of course it could be varied depending on the quality of the army or the scenario. 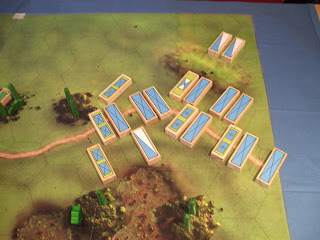 The approaching French - with extra Va-va-voom!

I will let the pictures do the talking but I will summarise what happened.

The French force essentially attacked from its line of march (a 'hasty attack' to use NATO parlance I believe) but was impeded by the stubborn resistance of the 95th Rifles deployed in the wood astride the road. The French attack was hindered by this for a time until overwhelming numbers began to tell and the Riflemen were forced out of the wood. Despite the support from their cavalry the Rifles were forced to evacuate the wood in the face of overwhelming odds. The leading French infantry unit was able to catch the gallant 95th in the open as they scampered away from the wood they so gallantly defended and with a withering volley decimated the survivors. It had cost the French some nine points of casualties to do this - a skirmisher unit was destroyed; another forced back and hits scored against the cavalry and some regular infantry. 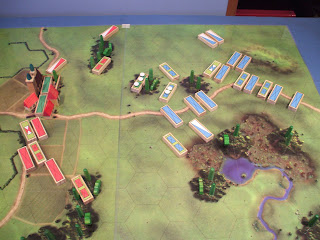 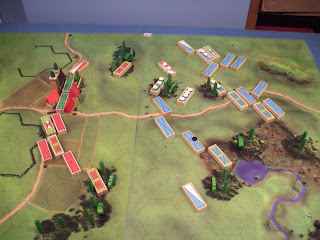 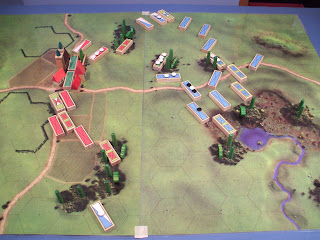 Both sets of cavalry withdraw to reform and reorganise - with fatal consequences for the embattled Riflemen. The black counters indicate artillery hits, the white from everything else 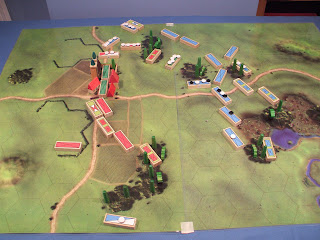 The end of the Rifles; caught in the open and on the flank the survivors were decimated

The French cavalry paid for its temerity as the troopers of the Dragoon Guards charged them and put them swiftly to the sword. Whilst this was going on the remainder of the French army was attempting to deploy into the open and out of the narrow confines of the road; inhibited as it is with an area of rough ground and the aforementioned wood. Sadly for them as soon as a unit appeared at the head of the column so it became the target for the Allied artillery (very effectively handled) and soon the entire leading regiment had suffered grievously from the guns.

After reforming the French cavalry set off to outflank the Northern end of the village - only to suffer from long range light infantry fire and the attention of the Allied cavalry. A furious succession of charges, counter charges, push backs and rallies took place which ended up with both sides losing a unit leaving the Allies with a single regiment and the same for the French although the remaining Gallic horse were on the opposite side of the village,probing the Southern end of the village. 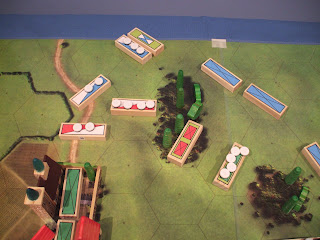 At this point, after some exchanges of long range musketry fire in the centre (where the French had finally managed to deploy units of regular infantry and the artillery was coming up to enter the fray) a quick head count had revealed that the break point for each side had been reached simultaneously and so the action ended as a technical draw. 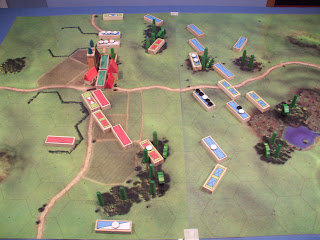 Endgame - with their cavalry ruined and heavy casualties in the centre, the French attack has ground to a halt but with telling casualties inflicted on the Allies

The game was huge fun and the tweaks required are very few and are more around clarity of purpose and personal choice as much as anything else. I want to formalise the melee procedure - especially for cavalry - and write up fully the break point/exhaustion level process. Movement and firing worked a treat although I may reduce infantry fire for units that have moved in some fashion otherwise light infantry are only just slower than cavalry and as deadly at close range (as the Rifles found out on turn one when they were 'bounced' by two units of French skirmishers and suffered three hits out of four dice rolled!).

As a battle I would say that it felt right and suitably Napoleonic - cavalry charges, skirmishers and Riflemen all playing their part - and with a little work the rules will be absolutely bang on the money for what I want. The beauty of this particular rule set (primarily designed with the second half of the 19th century in mind) is that it can be dressed up with period specific tweaks as required without the underlying mechanics being compromised in any way.

All in all then, a good recovery from the previous effort and I shall look forward to not only using the rules again but also reacquainting myself with the wars of Napoleon.

I am pleased to hear that the rules worked so well, and that you felt able to adapt them for the early 18th century without too much difficulty.

The battle report was very interesting to read, and it sounds like you had a great time fighting this battle. I hope to use MOB myself for a play-test later this week, but my battle will be set in the 1890s.

It was great fun to fight (and surprisingly quick as well - another big plus point!) and the rules worked very nicely indeed.

I plan to add a few 'extras' - details of which I will let you know when I have added them - just for period specific feel but the core system is a peach!

I am looking forward to your 1890s game - my next one will be set a little later - and will be interested to see what, if any, tweaks you deem appropriate arise.

Either way, have a great game!

It was really good fun and has certainly reignited my Napoleonic interest after many years!

There is a whole lot more mileage from these rules methinks!

Glad to see that your second game was better than your first.

I have to say it just felt a whole lot better and more, I dunno, Napoleonic.

I had the DVD of Waterloo on the netbook as a background accompaniment and it was rather strange how the dialogue was in time with the way the game developed!