As the Guns Fell Silent.... 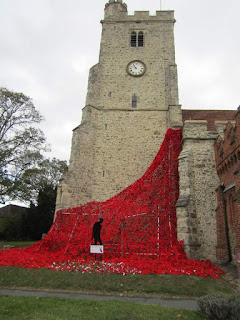 As the Guns Fell Silent....

On the shell torn earth where men grimly fought,
‘till the day was won’, at least some had thought.
For those that could not; that were not there to know,
lay at peace in the earth, where the poppies now grow.

Over the timeless sea ships sailed and warred,
through nature untamed the great guns had roared.
Victory or death, a proud boast could claim,
though the deep would fall silent, untroubled again.

Above in the sky, borne on gossamer wings,
to uncertain fledglings cruel destiny brings.
Guns rattle again as to the indifferent earth,
a fledgling falls broken, deprived of their worth.

No matter what nations, what colours, what creeds,
the impermanence of flesh unites all as it bleeds.
Grief is universal and cold death levels all,
as stillness and silence mute the bold trumpets call

Heed carefully now that old lie freely given,
that leaves town and country both bereft and riven.
Where hearth and home stand both desolate and bare,
and the cold, grey stone has but a solitary care.

Too soon they had gone, but for those that remain,
the annual remembrance pays homage again.
The fallen inviolate, though their flesh be no more,
as the guns fell silent, at the end of the war.