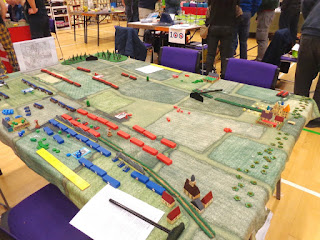 A wargame at a wargames show using Jenga blocks? Who would have thought it? Taken at the Battleground Stockton show by the convivial Mr Will McNally, to whom thanks are extended for, ahem, borrowing this picture....The game was organised by Andy Callan and is from the War of the Spanish Succession

It has been a relatively productive week all told although as usual not quite in the way I envisaged. I was able to spend some time on the 1:4800th scale models yesterday and have come to the conclusion that my initial estimates of how long they would take to finish may have been a little on the optimistic side. I have decided to split the collection into three batches for painting. The Germans consist of 10 ships, whilst the Royal Navy has 23, divided into 10 capital ships and 13 cruisers. You will have probably worked out the split - Germans, Royal Navy capital ships and then the cruisers. It means they will take a little longer to complete but are in far more manageable batches.

Post 1945 wars have taken up some of my time this week in that I have been reading up on Vietnam - inspired by revisiting 'We Were Soldiers' starring Mel Gibson and also the excellent book of the same name. Almost inevitably I have been drawn into looking at the earlier French Indochina war and as luck would have it I managed to grab a very cheap copy of 'The Last Valley' by Martin Windrow.

Again this is a conflict that I could very easily see myself tackling in some way and indeed, if you look at the blog of J Jackaman you will see reference to this conflict as well as some modern British colonial style conflicts. I really enjoy Jim's blog as his enthusiasm and sheer output has often shamed me into getting on with stuff rather than just thinking about it!

The pictures above has really pleased me in all manner of ways. To begin with it uses blocks as well as Town in a Bag buildings, what look like Cuisenaire rods as well as the plastic guns from Risk, sans the figures and mounted on bases. I liked the way that cavalry are represented (I had not thought of this) and indeed, placing all this on a very nice terrain mat you have what I think is an aesthetically pleasing looking game that looks like a real battle. I am HUGELY impressed with this and it has really given me much to think about. 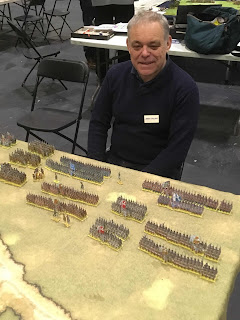 Have you seen this man? Andy Callan at salute earlier this year fighting with some Peter Dennis 18th century paper soldiers. We had a really good chat about fighting battles using alternatives to figures.

I really need to get in touch with Andy Callan - I had quite a chat with him at Salute earlier this year - so should any readers be in contact with him please point him at the blog! 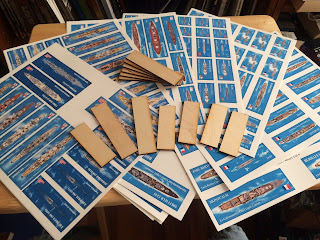 Topside Minis and the optional bases. 1:1800th is the main scale they offer - certainly for WW2 at present but WW1 and the Russo Japanese War can also be obtained in 1:2400th and 1:3000th.

Something else I had a look at during the week was the ships produced by an US company called Topside Minis. Basically the company produces a range of WW1 and WW2 scaled ship bird's eye views of pretty much most of the major combatants ships and aircraft scaled at 1:1800th with some also available in 1:2400th or 1:3000th. The last two scales at present are only available for WW1 but I cannot see any reason why the smaller scales should not feature for WW2. The ships are printed on high quality durable adhesive backed paper that requires cutting out and fixing to a base. These can be supplied (only for the 1:1800th ranges) although if shipping from the US this would push up the cost considerably. The ships and aircraft are lovely to look at and when based are quite durable and very easy to store. The website offers a free sample which I have ordered - merely for research purposes you understand....

Should I decide to order any - and my thoughts at present are along the lines of WW1 in 1:2400th - then a set for Jutland would cost $30 plus shipping. Naturally I would need to buy bases and 'assemble' them but trust me, cutting and sticking is a lot easier than gluing and painting and they would be a lot easier to store!

Something else to think about then.
Posted by David Crook at 09:19

Love it, David ! Do you have an email address for Andy Callan ? I would like to contact him concerning non-traditional wargaming.

If you email me on roguejedi@btinternet.com I will pass on your details to him.

I was really impressed at seeing a Jenga block wargame at a wargames show. It was hugely inspiring to see - and that was only the photo!

Love seeing the Jenga blocks as units. Really good idea, especially as Amazon has a Cyber Monday special on them!

I had to do a double take on the paper miniatures in the Andy Callan picture. Those look really good. I guess it was because I did not see any cavalry in the force that I did not initially think those were paper.

I have used them full size like Andy's set up but more usually cut in half. Having said that though I can see myself using the larger blocks again.

The paper armies are quite wonderful to look at and the cavalry is viewed from the front.

Good luck with your Jenga adventures - I got mine from the Works.

Clever.
How did he do cavalry? I can't really tell from the photo.

As an added bonus behind the Jenja blocks top middle is the Canvas Eagles Game I was running with my friends. So very top middle you get my groin and paunch in jeans and hoody top ;)

Not for the faint-hearted

Curing myself as I did not get away to play test the Cruel Seas game. I only found out afterwards it had been tucked away in the Warlord Games corner. I will just have to wait for the Xmas start pack

@Kevin Cavalry appears to be a full-size brown black with a half-size color block on top.

Cavalry uses a normal sized Jenga block painted brown with a strip of square beading painted in the national colour glued to the top.

Your presence has been duly noted! I had a look at Canvas Eagles and they look like a lot of fun - especially for the price!

I am looking forward to Cruel seas and no mistake - my local WH Smith reckons Friday they will have the December Wargames Illustrated so I hope I can get copies with each sprue on.

Not long to go!

Squared beading cut to size and painted in the national colour scheme. I thought about this and have a few ideas I shall be posting about in due course.

No problem. I must confess that Andy Callan's solution to representing cavalry whilst using Jenga Blocks has given me a number of ideas. I shall be posting about this in due course but I was thinking of using three colours for cavalry units. Black would be for guard or heavy cavalry, chestnut brown for line cavalry and a light brown for light cavalry or something similar.

I also think that this method could also be used for mixed pike and shot or pike phalanxes.

This is fascinating! Kind of like old-fashioned Kriegspiel blocks but big enough to pick up and actually see. I must admit to being more than a little curious how I might adapt this to my own purposes.

I must admit that seeing the full sized Jenga blocks in action was very inspiring and if I am honest I think that I may have missed a trick by not pursuing my own block based games in a similar vein.

Having said that my own approach has given me an alternative lower level kind of game which has been immensely satisfying.

It is great to see non-figure based games getting a public airing though and Andy Callan has not only made an excellent looking game but the rules he devised to support it are also very good.

A pair of block based armies is very cheap to put together and they work quite happily with model terrain although I would suggest using 15mm or smaller.