Going Around the Block (Again!) 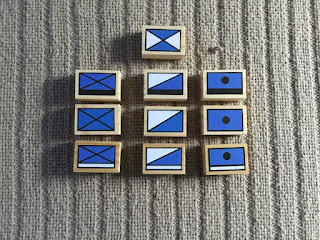 The (not so) new blocks. The middle row is the standard type whilst the top row with the dark strip represent 'heavy' types whilst the bottom row are for 'light' types. It is easy to see the way these types are facing but less obvious with the standard 'line' types.

One of the parts of my collection I shall be making use of once again are my block armies. Readers of the blog will no doubt recall the vast number of games I fought using these (see the folder marked 'games') and it is fair to say that I certainly got a lot of mileage out of them. As an easy way to try out a new set of rules or historical period they are ideal and I am really pleased I persevered with them.

All of the games I fought using the blocks were using grid based rules and so for the most part the facing of a unit was largely irrelevant. I have a number of ideas in mind for some games using the blocks but without a grid. Units will be made up of a number of blocks in the usual way – 4, 3 and 2 for infantry, cavalry and artillery respectively – and I will be able to represent formations such as columns, lines and squares. In effect a single block will represent a base of figures.

This is a fairly straightforward idea and indeed, is something I had always planned to do. I do however, have a small problem. Looking at the block picture above you can see the style I have adopted for differentiating between heavy and light troops with the strip along the bottom edge of the block. When deployed ordinarily the strip would be facing the owning player so the facing of the block can be readily determined. However, the main bulk of the blocks for all troop types do not have any such strip so determining facing can be problematic.

I really do not want to re-label several hundred blocks with a facing marker of some kind as this would take an age to do, not to mention using copious amounts of printer ink. At this stage I am unsure about how I am going to tackle this although one idea is to mark the label in some fashion so that it is obvious which way the block is facing. Another alternative would be mark the leading face of the block itself. Another alternative is to place a base under one of the blocks in the unit or use some kind of ‘sleeve’ with a small flag attached to it. With the flag to the fore the rest of the unit would be assumed to be facing the same direction. If I am honest I would prefer to keep the blocks as they are so my thoughts are very much leaning towards the ‘flag on a base’ option.

I have wanted to use flags in some way with the block collection for some time now as it will help to give a sense of identity to the force being represented. I am thinking that 15mm scale flags would look rather good so I may well spend some time experimenting with them.

Using the blocks with non-grid based rules opens up a number of opportunities for me to explore across the entire ‘horse and musket’ period and beyond. It will be interesting to see where this goes as I currently have nothing specific in mind. The 'flag' idea though is something I want to be able to square away sooner rather than later.

The flags will look cool. Go with flags!

Could you drill a hole thru the top but near the front edge that would allow a flagpole to be inserted?

You'd have to make a bunch of little flags, but if they were period specific they would add a bit of colo(u)r to the affair.

Hi David,
Just a thought - what about using a paper clip (preferably black to negate painting). Part of it could be bent into a shape similar to a coat hanger (this would be the bit that the block sat on), the remainder then being straightened to serve as the flagstaff.
John

Myself, I'd go with a simple cardboard base under the "command stand" shaped like an open envelope. The pointy flap part indicating the facing. They could also be color coded to indicate the status of the unit, good, staggered or shaken, routing, etc.

This is probably a silly idea, but let's put it out there; why not just put a dot with marker pen on the leading edge of the block?

You are quite right! I had always planned to use flags at some point but had never gotten around to it. I believe it will really add to the visual appeal and will also serve to make the action more ‘personal’.

I really do not want to touch the blocks in any way if I can avoid it - simply because I have so many of them and it would be rather a large undertaking. Even if I only drilled, painted or relabelled one block from a unit (1 in 4, 3 or 2 for infantry, cavalry or artillery respectively) it still means changing around 300 or so blocks.

I have a cunning plan though....

That is a good idea and is along the lines of what I am currently considering only my version would be more in keeping with the overall look of the blocks as they are.

A very good suggestion though and it has given me an idea for something else I am planning so many thanks!

Again, that is a good idea and I am currently experimenting with something similar - great minds more or less think alike!

I did consider this early on but decided against it as I do not want to mark the blocks in any if I can help it. If I was starting the process over again I would have factored in something on the label to indicate facing but I am not about to rework several thousand blocks anytime soon!