"They shall not grow old" 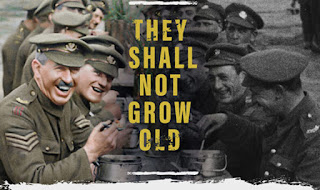 Yesterday evening, on the train home from work after a particularly trying day (although not trying in a WW1 trench being shot at and shelled kind of way!), I watched the second half of Peter Jackson's WW1 documentary - They shall not grow old'.

There is not a great deal I can say about it other than by turns it was heroic, awful, horrific, honest, down-to-earth, funny even, in a gallows humour kind of way - but above all a testimony to the bottomless wellspring of the human spirit.

The colourisation was quite breathtaking and for me really served to bring the full catastrophe to life; far removed from the blurry, black and white images and  jerky footage one usually sees.

Although my interest in the Great War tends to shy away from the Western Front (accepting 1914 and 1918) this is a compelling argument for paying it more attention in the future.

As for the title of the documentary I could do more than than quote the poem from which is was taken.

With proud thanksgiving, a mother for her children,
England mourns for her dead across the sea.
Flesh of her flesh they were, spirit of her spirit,
Fallen in the cause of the free.
Solemn the drums thrill: Death august and royal
Sings sorrow up into immortal spheres.
There is music in the midst of desolation
And a glory that shines upon our tears.
They went with songs to the battle, they were young,
Straight of limb, true of eye, steady and aglow.
They were staunch to the end against odds uncounted,
They fell with their faces to the foe.
They shall grow not old, as we that are left grow old:
Age shall not weary them, nor the years condemn.
At the going down of the sun and in the morning
We will remember them.
They mingle not with their laughing comrades again;
They sit no more at familiar tables of home;
They have no lot in our labour of the day-time;
They sleep beyond England's foam.
But where our desires are and our hopes profound,
Felt as a well-spring that is hidden from sight,
To the innermost heart of their own land they are known
As the stars are known to the Night;
As the stars that shall be bright when we are dust,
Moving in marches upon the heavenly plain,
As the stars that are starry in the time of our darkness,
To the end, to the end, they remain.
Posted by David Crook at 09:21