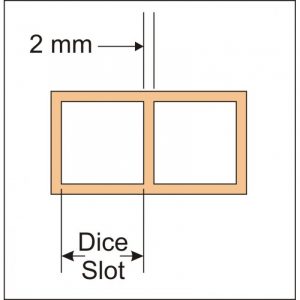 A frame for two dice. I plan to get some of these from Warbases without the central bar so that rectangular blocks will fit in them.

Following on from earlier post (and grateful thanks for all the suggestions which helped to clarify my thoughts somewhat!) I have settled on the way I shall be tackling the thorny question of unit flags for the block armies. The solution I have come up with will probably seem a little on the overkill side but there are a number of advantages for me.

I am proposing to use bases for the blocks on the dice frame principle.

Each block will have a base with a frame on it. The base will be textured and painted and at this stage I am looking at a green and a sand coloured set. A number of the bases will have either a small piece of tube or a magnet to which a flag can be fixed for the unit command stand. Being removable is important as obviously the blocks can represent many different forces so having fixed flags was never an option. The bases will enable a uniform frontage - I shall be using 40mm which is pretty much standard for 15mm figures - and when they deployed on the table adjacent to the other bases in the unit will have realistic sub unit divisions. This is helpful when representing a formation where a block is a single unit, for example in a four battalion brigade. 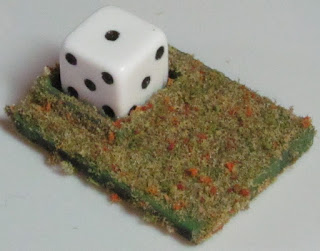 This will the kind of thing I am looking at. The block will take up more room than the d6 shown and by placing either a piece of hollow tube or a magnet midway along the front edge a flag can be easily placed.

As far as the textured base and dice frame are concerned the visual impact will be to make the blocks appear smaller when viewed from eye level but in fact they will be taller due to the base. Having a block with a standard will make the units more readily identifiable as well as providing a focal point for the formation when manoeuvring.

As well flags for units I am also thinking about high level command bases. An idea I considered sometime ago was to use 15mm figures for command groups for ease of identification. These would help with translating the block armies into something more familiar as, for example, if one had a base with a model of Napoleon on it their would be no doubt that the array of blue blocks represent a French army. Even i could knock up some meaningful looking command groups! Whilst this is a nice idea my thinking at present is to have flags printed with the name of the commander written on them.

The main reason I am spending time on this particular element of the block armies is very much to do with using them on a non-grid basis. The collection will look far better and with obvious command elements and formations shown on the table will make for a visually more compelling action - especially when supported with a properly constructed scenario and an after action report in which the purple prose flows readily!
Posted by David Crook at 12:10

What an excellent idea! It should improve the look of your already-good block armies.

Many thanks for the kind comments - much appreciated.

I am hoping it will help to give the armies a better sense of identity when I use them.

Following on from your last post I was wondering what solution you would come up with David, and this seems perfect, a rather clever idea at that. I look forward to seeing how they look once you have a few completed.

Thanks old chap! I am sure that some would say that it seems like a lot of work for a collection of blocks but I am sure it would improve the final look no end. It is something I have been thinking about for a while now so striking while the iron is hot seems like a good idea!