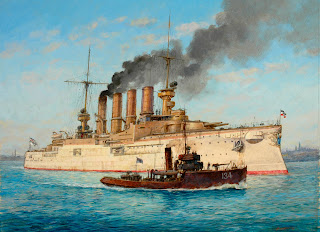 It has been a productive and positive week overall set against the backdrop of Remembrance Day - more of which later.

My progress for this week falls into two parts with the former being very much Great War focused and the latter to the Second World War.

In respect of my Arab Revolt project I have decided to include Madasahatta as a supporting partner in order that I can expand the naval dimension in the Red Sea and Indian Ocean. I am currently drawing up fleet lists for this although perhaps describing the forces involved as 'fleets' is a touch of an exaggeration. I reckon that allowing for all of the options I envisage arising we are looking at around three dozen models at a maximum. In pole position for this are Tumbling Dice as they have virtually everything I need in 1:2400th. There will be blog post about this in due course once I have finalised what I am doing.

For the North Atlantic project I was able to make some significant progress over the weekend with the painting. All of the models currently on the painting tray have had their middle dry brush and I have also done their pure white fine edge brush as well. I managed to destroy a cheap Humbrol OO sized brush for this part of the process but the end result looks pretty good. the next stage will be the decks and funnel tops before moving on the bases. It seems obvious but I have found setting myself a specific goal when painting really helps with the productivity.

I was also able to tackle some administrative tasks in connection with the rules I shall be using for this project - nothing major but important nonetheless.

Overshadowing all though, was of course Remembrance Sunday and the centenary of the end of the Great War. As I have gotten older and my knowledge and understanding of the human dimension of war has increased, I tend to get quite reflective about those that have made the ultimate sacrifice. I have often wondered if those that have remained have 'won the peace' so that their sacrifices were not in vain. The answer to that is not an obvious one but, as I was reminded, I have the freedom of choice to be able to reflect on such things because of their efforts and whilst it may not be the promised land it is a whole lot better than the alternatives.

Lest we forget  - not just the loss of loved ones but what they left for us to make the best of in what way we can. They never had the chance to worry about the things that only the living and free can.