The Naval Dimension of the Arab Revolt 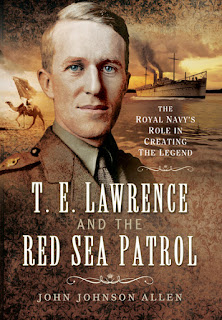 This is a great read although there are a couple of editorial errors. Pen and Sword are guilty of this occasionally but still get my vote (and a fair amount of my money!) for the subjects they cover.

It must be said that when one thinks of the Arab Revolt during the Great War that one's thoughts do not naturally alight on the subject of naval warfare. Indeed, the most common 'ships of the desert' are usually of the humped variety rather than coal burning. However, control of the Red Sea was of paramount importance to the Allied cause due to the Suez Canal and the shipping routes to India.

By the time the Arab revolt started in 1916 the Royal Navy had pretty much cleared the seas of German warships and so only the odd raider or submarine was likely to feature and even then their activities would be well away from the Red Sea. The Turkish Navy was focused primarily in the Black Sea and so, for all intents and purposes, the Turkish Arabian armies had no naval support. To be honest this was not a major inconvenience for them but it did mean that the Allies could not afford to allow them the luxury of having a naval presence astride the route to the Suez Canal.

The Allied Red Sea Squadron was made up of some arthritic Royal Navy cruisers and gunboats and a smattering of ships (including some very useful troopships) supplied by the Royal Indian Marine. These were used for patrol, policing, revenue protection, troop transport and supply purposes and occasionally in support of land actions. The book above tells the story of the Red Sea Squadron and the role it played in support of the Arab Revolt. In addition to this I also have a couple of PDFs of some old editions of the Naval Review for 1924 to 1926 that has some further details.

This was not the war of great lines of battleships and fleets manoeuvring; rather it is the low level routine bread and butter naval duties that are no less important for all that.

I fully intend exploring the naval dimension but with a little twist. If I am honest gaming the naval side of the Arab Revolt historically would be of limited shelf life. For sure there are some good games to be had but these would be very scenario specific. I want something with a little more depth to it so that the naval dimension becomes equally as important to both sides and not just as a one-sided area denial exercise.

My plan is to work on the basis that the Turks have a naval presence in the area supported by the Germans. There will be a number of assumptions. German East Africa will still be holding out, albeit surrounded by the Allies. Madasahatta will also feature - at least in its naval capacity.

I need to work out the specifics for each side but the best news of all is that I can make use of the range of 1:2400th scale models from Tumbling Dice.

Again, this will be quite low level in terms of the number and type of ships in use although I may spring a couple of surprises for each side. For the most part the forces will consist of older warships supported by requisitioned merchantman with the odd dash of modernity thrown in for good measure.

I shall be using Bob Cordery's excellent Gridded Naval Wargames as the rules of choice for this little 'sideshow of a sideshow'.

Well well well. Never considered for a moment that there might be a naval dimension to the Arab revolt. Very interesting, I hope you get around to gaming something from the period. I'm especially interested in any reccomendations you might have for fast play naval rules since it's something that's interested me for a while but about which I have zero knowledge. Just to expand on that, something early dreadnought era would be what I was aiming at.