The Naval Dimension of the Arab Revolt....Part 2 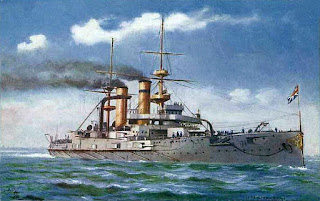 HMS Swiftsure - sister ship to HMS Triumph. Originally ordered by Chile but purchased by the Royal Navy to stop the Russians acquiring them.

One of the problems when organising a campaign is not so much what to include – rather it is what NOT to include. It is very easy to keep adding bits and pieces but before long the whole thing becomes overweight and cumbersome. For me the issue is all about justifying within the context of the story what is possible and why.

I have always enjoyed having a fully developed back story to a campaign as it helps to support and drive the action. Of the two major campaigns I have taken part in – Madasahatta and the follow on South East Asia Naval campaign – the former was very well developed in this respect but the latter was most certainly not. That is not to say that the naval campaign was not fun – it was – but it lacked the narrative of Madasahatta.

Now I am planning my spin on the Arab Revolt the decision to expand the naval dimension needs to be, and I hesitate to use the word, justified. I am effectively taking the historical situation as it existed at the time and ‘upping the ante’ from the naval dimension. However, this aspect needs to be addressed in what I would call a sympathetic way. In other words historically viable.

I have already gone some way towards achieving this in that the vast majority of what is available to either side will be for the most part second rate or obsolete units, ideal for colonial policing and flag showing but not up to modern standards. I have considered a number of ideas and am leaning towards the following (of permutations thereof).

Whichever option or options of the above I choose the concern for the Allies will be that the Germans will be overall command of the naval forces centred on Madasahatta. Any of these would mean that a vigorous response from the Royal Navy.

From the other side of the fence the choices are a lot easier. The Royal Navy routinely used old and obsolete ships overeas and would keep the more modern vessels in home waters facing the threat from across the North Sea. For my purposes the Red Sea squadron would be reinforced and would make use of Mombasa , Aden/Oman and of course the British part of Madashatta. For the most part we are looking at older armoured and protected cruisers with the occasional visit from more up to date units. The options I am considering for the Royal Navy are based on the following.

Both sides will naturally make use of requisitioned steamers for use as armed merchant cruisers in order to save the wear and tear on the warships.

Obviously these ideas are very much in the sphere of 'what ifs' and I will need to nail down the specifics but I think I am on the right track.

I certainly hope so! Seriously though, the Arab Revolt is something I have had a hankering for for ages and tying in East Africa and Madasahatta to expand the naval side (which I am very fond of) seemed a natural fit.

The naval games will not be great fleet actions but at a scale that will be ideal for limited space and solo play.

I am looking forward to it but there are a couple of things to get finished first of all.