On Painting and WW2 Coastal Combat 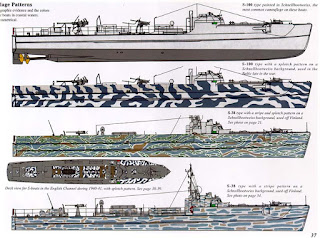 A selection of S Boat colour schemes - I suspect that mine will probably be overall white....

It is really strange how the smallest of things can re-energise and reinvigorate the creative juices. Having my ‘pop up’ painting station has given me a massive injection of what I would call focused effort. The table I use is 3ft by 2ft so can only support a specific piece of work at a time. For me this is very important as it is a good way of ensuring that I concentrate on a particular project rather than flitting from one thing to another! I spent some quality time working on the 1:4800th scale WW2 ships Sunday afternoon and the progress was very satisfying. This coming weekend I will have both Saturday and Sunday afternoon spare so the plan will be to get the highlighting taken care of and also the decks – in fact, should everything go to plan I may be able to get the ships finished bar the varnishing and basing. That would be just peachy!

With the accelerated pace of painting (and trust me, that is NOT an expression I would have ever used about my humble efforts!) the project paperwork now needs some immediate attention in the shape of the fleet lists and the name labels for the bases. This will be straightforward to do, as will the inevitable play sheet. If I am honest it would be really handy to get this first batch of models completed by Christmas as it will enable me to get a couple of games in over the holiday period.

With the start of the new year I will be tackling the Kurz and Allison ACW Spencer Smith 30mm project which I am very excited about – even more so with the planned scratch built ships I will be building alongside the figures. There is also of course, the looming spectre of Cruel Seas by Warlord Games being released in December…. 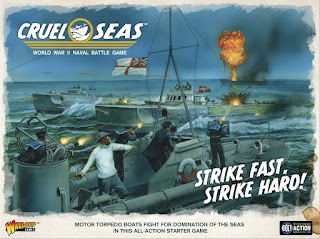 Not long to wait! I am really excited about this.

I have followed Warlord Games’ Cruel Seas with interest and am excited about the prospect of this. I took a look at the Heroics and Ros website as they a very nice range of metal ships in the same scale (1:300th) which will add to the variety of types that can be represented. It is rather strange in that whilst I have been keen on the subject matter for many years now I have yet to tackle the subject using models. I have also completely missed a number of very good sets of rules concerning coastal warfare by David Manley which is basically unforgivable….

My particular interest in this regard is the Mediterranean and Aegean which saw a lot of activity using smaller craft – all of which is eminently gameable. The challenge will be locating suitable models for some of the more locally requisitioned craft. 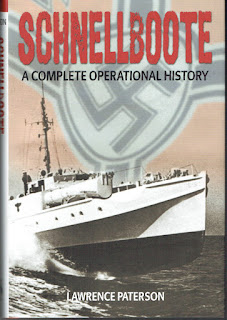 I acquired the Kindle version of the above during one of Amazon's sales for 99p - I enjoyed it so much that I went and bought the hardback version!

In preparation for the release of Cruel Seas I have been dipping into a couple of books I have on the subject including The E Boat Threat by Bryan Cooper and the superb Schnellboot: An Operational History by Lawrence Paterson. I also have a copy of Motor Gunboat 658: the Small Boat War in the Mediterranean by L.C. Reynolds which is very good. There are few other books I am keen to add to this section of the library but at this stage I do not need to go too mad. I note there are a couple of Ospreys in their Vanguard series which are of interest and I suspect that some of the artwork will appear in the Cruel Seas rulebook.

It looks very much like next year will be rather a wet one in that there are a number of naval projects I shall be tackling. After the 1:4800th scale North Atlantic set up is complete (including destroyers) I shall be scratch building ACW river gunboats as well as whatever I need to do for Cruel Seas. There is also the germ of an idea I have in connection with the Arab Revolt project involving, yes you've guessed it, more ships....

Schnellboot is rather good and has a myriad of ideas for scenarios.


Iam also going to do most of game in the med. Have you tried the book.
Swastika Over the Aegean by Anthony Rogers.

I have not seen this one so many thanks for the heads up!

If you're looking for another Coastal Forces book, you might want to look at Dog Boats at War by Leonard Reynolds (author of Gunboat 658). It has some good ideas for scenarios involving Fairmile D boats. He also did a couple books on short MTBs, including one covering the Mediterranean call Mediterranean MTBs at War.

Good luck with your project!

Did you know that many of the camouflage paint schemes used by the Royal Navy were devised by Sir Peter Scott the naturalist.

Peter Scott was also the commanding officer of HMS Grey Goose, one of the seven Steam Gun Boats of the Royal Navy

Psst: I see that the December Wargames Illustrated has Cruel Seas on its front cover ;)

I didn't know that. I seem to recall he wrote about his wartime experiences in a book called Battle for the Narrow Seas or something similar.

I figured that if there was enough mention of coastal warfare you would pop up eventually! I hope you are well.

I must apologise in advance as all of your coastal sets of rules have completely passed me by over the years as I flirted around the periphery of the period. I shall be rectifying that though....

I was a little surprised at the choice of 1:300th for the models but as I do not have anything else for this period and would be starting from scratch it does not make any difference to me. Heroics and Ros have a rather spiffy little range I can use and I am thinking that I am not really going to need very much material for my own purposes. We shall see though in due course...

I had heard about the Grey Goose steam gunboats but did not know about the Peter Scott connection.

Really good to hear from you again and all the best,

Many thanks for the heads up re the books - it looks like my plan on adding perhaps a couple of titles is looking a little shaky....

Yes I noticed that - and the sprue that goes with it....

Methinks it is going to be a busy Christmas!