One of things about our hobby that never ceases to amaze me is how looking at a particular something can lead onto something else that is quite different on the face of it but with a touch of commonality. 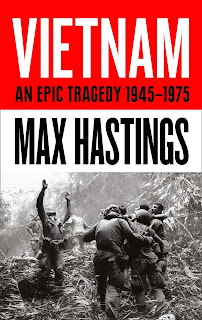 Advance notice of what will be my Christmas reading courtesy of SWMBO and rather a lot of doubled up Nectar points! I am looking forward to reading about the French involvement leading up to Dien Bien Phu 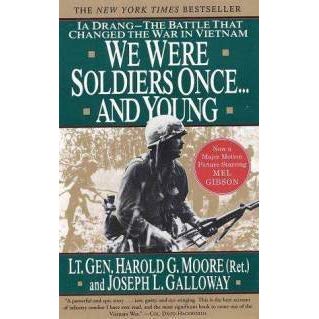 I mentioned previously that last weekend SWMBO and I spent rather a long time in our local Sainsbury taking advantage of the ‘double up’ on Nectar Points. To cut a long story short we acquired good to the value of £200 by surrendering £100 of Nectar Points. For the most part it was used to finish off the Christmas shopping (SWMBO is incredibly organised about this sort of thing – in fact she has not only purchased everything she needs to but it is also wrapped and tagged and waiting to go under the Christmas tree in two weeks’ time) for the family which for me came in the shape of the new book by Max Hastings about the wars in Vietnam.

Vietnam and I have enjoyed a rather long distance relationship from the gaming perspective in that it is a period I am interested in but aside from a few aerial games using SPIs Air War and the odd skirmish I never really invested in it very much. I have seen a number of the main cinematic stalwarts – Apocalypse Now, Platoon, The Deer Hunter, The Green Berets, Hamburger Hill and my personal favourite, The Odd Angry Shot – although for some inexplicable reason Full Metal Jacket is missing but soon to be rectified. Another film that I have seen is of course We Were Soldiers starring Mel Gibson. The film is about the vicious fighting that took place in the IaDrang Valley in November 1965 and is based on the book of (more of less) the same name written by (then) Colonel Hal Moore and Joe Galloway.

I use the word ‘vicious’ to describe the fighting in Ia Drang because it was just that. It was up close and very personal and with huge quantities of automatic weapons fire. The film captures the claustrophobic nature of the fighting very well and although it takes a few historical liberties it was generally well received and even Colonel Moore approved (he was quite scathing about other films covering the war and as he was actually in the firing line during the events depicted his opinion is important). As well as the film I also own a copy of the book which is very good indeed and for me really captures the intensity of the battle.

A number of years ago I acquired a number of boxes of 20mm plastics from Revell of US special forces and the VC but sadly these went awhile back. I even drafted a Memoir 44 based adaptation for the conflict based on using elements from the Pacific and Eastern front expansions. It is a conflict I would like to game but I am not sure how or even when.

Leading up to Vietnam (bear with me as this will illustrate how my brain works. Or not, as the case may be!) in my recent research was Aden, initially for the World War 1 angle. As you are aware Aden is going to feature in support of my Arab Revolt project – there was fighting against the Turks and with Arab allies present on both sides – when lo and behold  I came across mention of Radfan. I have familial interest in the Radfan campaign as my brother in law served with the Parachute Regiment there. 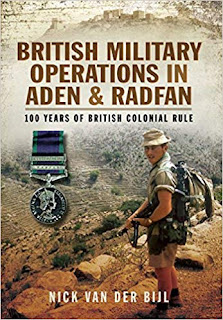 One on the 'to get' list for sure as it covers the WW1 period as well as the campaigns during the 1960s. My brother in law took part in this as a member of the Parachute regiment.

I had promised myself that I would familiarise myself with the British operations in Aden and Radfan for two reasons. Firstly because of the ‘colonial’ nature of the British involvement and secondly due to the family connection. If I am honest it is one of those periods I would like to game but am probably unlikely to do so although I will have the appropriate terrain to hand for the earlier WW2 operations. Mind you, having said that the idea of any games that involve ground attack Hawker Hunters would definitely weaken my resolve! 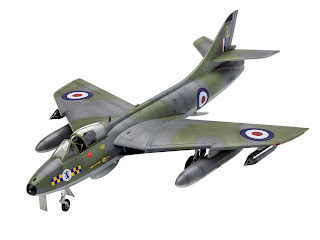 So, two modern conflicts fought in very different terrains by two major powers and each with their own particular merits as well a degree of commonality in certain areas. Something else to ponder methinks….

I do like Max Hastings, he even started a row among two Rejects, I loaned his book Armageddon to a Reject and he was so horrified with how the British were described he binned the fecking book!

I would be interested to know which Rejects featured in this - I have my suspicions though....

I hope you were duly compensated!

The conflict in Aden did feature the nicest sounding freedom movement I'd ever heard of, FLOSY (Front for the Liberation Of South Yemen). Their tactics were not as pleasant.

I well remember 'Mad Mitch' and the Argyll and Sutherland Highlanders retaking the Crater, although his tactics did not go down well in some quarters.

My brother in law has some, shall we say, interesting stories from his time over there.

It is a conflict I would like to learn a little more about and it bolts on nicely to the research I will need to do for the WW1 era in any event so its a win win!

I have been following your project with some interest and actually meant to mention it the blog when I wrote this post! I am looking forward to seeing how it plays out and I have already thought about making some terrain pieces based on your idea for the fields. They look really good and will go nicely with my North African village.

As I recall that was by Bernard Falls who also wrote 'Street without Joy' which also covered the war. Dang it, something else for me to think about....