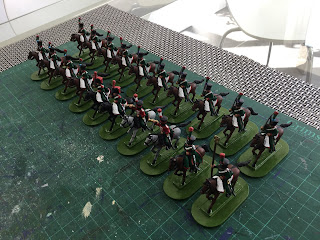 Minifigs French Napoleonic Line Chasseurs a Cheval. These rather jaunty fellows were supplied by Mr Fox and painted by Mr Rousell. My contribution was limited to basing, touching up and varnishing - and organising a flag!

One of the problems I have touched upon previously concerning the Del Prado Relive Waterloo range is that the range of figures available is rather limited. A good example is that the French army does not possess any line or light cavalry other than Cuirassiers in the case of the former or Guard for the latter. I have a unit of Dragoons from the Relive Austerlitz range but this was not released in the UK so finding figures is rather tricky.

You may recall a short while ago that my old friend, Mr Fox, kindly donated an old Minifigs Dragoon  unit painted for him way back in the late 1970s but another old gaming friend, Mr Hardman. This is a 20 figure strong unit which is very nice looking but for the green paint that had gone bad over time and had badly worn. By virtue of the contents of this post I have moved the Dragoons renovation to the top of the painting pile simply because I am feeling suitably inspired!

The unit you see above began life as a box of unpainted metal in the collection of Mr Fox and lurked for many years in his very own Area 51. Whilst having one of his periodic clear outs - occasioned in this instance by his recent use of Rebels and Patriots for Napoleonics - they were deemed to be surplus to requirements so the deal was struck and they passed over to me.

Enter stage third left, that well known Bon Vivant, Wit and Raconteur - the great Ray Rousell of Postie’s Rejects fame - who very kindly took them off my hands to paint them.

There is a long and involved story behind this in that I had been discussing some painting with him for some time but the goal posts (my own ideas) changed with bewildering rapidity as projects came and went. I can only assume that he has the patience of a saint!

Anyway, to cut to the chase he turned these fellows round in record time and so all I needed to do was to add them to their bases, paint them and then apply industrial quantities of gloss varnish. I have not subjected them to the varnishing as yet as there are a few little bits of touching up to attend to.

I am really pleased with these as the paint job is very much in keeping with the main bulk of the Del Prado collection - Ray really had to dial down on his usual technique which is of a much higher standard - and as my praise was so effusive I have managed to talk him into painting a further three eight figure Minifigs cavalry units for me in due course!

Ray did a great job on these Chasseurs. Enjoy!

Good to hear from you old chap - I hope all is well with you and yours!

Ray did an excellent job with these and once they are finished they will look grand on the tabletop.

A lovely looking unit and well done on Mr Fox Ray on helping you out.

Hi David
Hangin in there. Working from home, teaching via Zoom and not going too crazy.
Stay healthy and loving the old Minifigs, I always enjoy painting them
Peter

Glad to hear it old chap! The joy of Zoom eh. If you are anything like me then I doubt you would have had time to go crazy! The DIY list seems to getting bigger by the day.

The Area 51 of Mr Fox is probably something like the warehouse at the end of Raiders of the Lost Ark! Ray did a really good job on these considering he hates painting Minifigs and the standard was very dialled down for him.

They will fit in very well with the rest of the collection and I hope the refurbished Dragoons will also be as good. Certainly they were when first painted!

They do look rather dashing all based up and finished Dave.

The varnish will be going on tomorrow. I really like them and once again many thanks for doing them for me.

He certainly did! So much so that it has inspired me to get out the paint brushes in earnest.