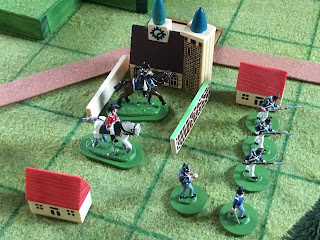 Whilst the Duke surveys the retreating French whilst planning the next moves for the army, Hyde-Bowned ponders his potential knighthood and the prospect of cutting a dash during the forthcoming season.

The battle was fought, the figures returned to storage, the terrain packed away and the after action report written. So how did it feel?

It was really good getting the figures out on the table for the first time and I was very pleased with how they looked. The game went well and felt like how a Napoleonic battle would feel with all the right ingredients - skirmishing riflemen, charging cavalry, columns, lines and gallantry galore. From the perspective of the spectacle it ticked pretty much all the boxes.

Yet it was not perfect.

I was forced to use the 3” grid playing area and whilst the overall area - 12 x 8 squares - was OK with the movement trays the unit footprints were a little on the unwieldy side. With this in mind I have taken the decision to restrict the use of my 3” grids to 15mm figures or the block armies.

The movement trays will need painting - I had intended to do this at some point anyway - and I will also need to get some more in once Warbases are back in production. I am particularly keen to get a 75mm by 50mm base for the cavalry.

I need to rebase my trees as the bases I used (from a game called ‘Bottle) are a little too large. The only problem is that I glued the trees to the bases using superglue so removing them is going to be a challenge! they will also need painting.

Much as I am attached to my collection of ‘Town in a Bag’ buildings they are now going to be used for games scaled at 15mm or smaller, together with the block armies. Stylistically they are ideal and so I intend to produce something broadly similar but in a larger scale.

I am perfectly content using units based on the sizing from Command and Colours: Napoleonic - typically  3 to 5 infantry, 3 or 4 cavalry and 2 or 3 gunners and a gun - which suits the collection better at present as I am short of certain command figures to build conventional units with.

As far as the rules go I was using Bob Cordery’s Portable Napoleonic Wargame Brigade level rules. These worked perfectly well and gave what felt like historical outcomes in given circumstances. There were a few things I had to ‘make a call’ on but that can, and frequently does happen with most sets of rules in my experience.

I have a few tweaks that I shall employ with these rules over time but as they are they give an excellent game.

The scenario was rather hastily put together and as a result the action was dictated by the size of the village. Near as I can see the end result came across as something akin to a Napoleonic version of Stalingrad!

Taking all of this into consideration I have come to the following conclusion.


It was tremendously chaotic fun in many ways and so I would like to thank both Bob Cordery and Old Painter Bob for making it possible.

It looks as if you have a plan that will produce the sort of games that you most enjoy playing,

I think that you will have a few Life Guard figures to add to your British Army in the near future - once you have repainted some that are on their way to you.

I look forward to seeing how your project develops.

Many thanks old chap but trust me, it is going to get a whole lot better!

There is a way to go but it is a path I will happily tread. Seeing the game in action reminded me of my early days in the hobby and the sense of wonder and excitement seeing such a collection on the tabletop.

The figures you mention will be put to good use for sure so many thanks indeed!

All the berry based and many thanks once again,

Hi Dave. I don't know how large of battles you are planning to do in the future, but I have to say at this scale, I would have not bothered with the movement trays. With only one unit per square or hex, the square or hex defines the unit, so you don't need the trays to reflect casualties. I wouldn't think that moving and arranging four figures would be all that time consuming. It would be like playing "little" army or cowboys and Indians, the way we did... gosh, is it really 60 years ago? Anyway, it would look very toy soldier, old schoolish. But as usual, that just reflects my personal priority, how it looks over how it plays. I'd do towns like you did those hill hexes, one piece with thin silhouettes of buildings glued around three or four edges of the hex, allowing the trays to fit comfortably inside of the town hex. --Chuck

Good to hear from you and i all is well in your part of the world.

The bases were the wrong type for the rules I was using and were dictated by the size of the grid. 3” squares are definitely too small for this set up so I have retired the playing area (and its desert coloured relative) to use solely with 15mm and smaller figures. A 4” grid - hexes or squares and I have access to both - is far better and the so the bases can be used properly. When I say properly for use with the Portable Napoleonic Wargame most units are made up of two bases each. These are 2” x 1” for foot and 2” square for mounted. With my individually based figures a typical infantry unit on the applicable base size will be 4 figures. The movement trays are solely for use with specific rule sets and so for my usual C and C style games I will not be using them.

I need to address the whole buildings situation as I need to get something a little larger than what I am currently using. I have a few ideas in mind that I shall experiment with.

The overall look I am happy with and the great thing about the collection is that I am would be able to add further units from just about any source (excepting some of the larger sized figure manufacturers) and indeed, have done so.

As far as the size of battles I will be fighting goes well that will be determined by the size of the playing area I will be using. I have a 13 x 9 hex gaming mat (with 4” hexes) and from past experience know that games of more than around a dozen or so units a side tend to get a little crowded. Having said that some of the standard C and C Napoleonic scenarios are larger.

However it plays out this is only the beginning of what I am sure will be a wonderful adventure!

I somehow missed these posts but have had the pleasure of reading them all at one sitting. Great looking game. I personally like the little wooden villages and don't think I'd change them but it's all subjective. Hope you're planning on playing/reporting more games in the near future!

Many thanks for dropping by old chap - I hope all is well with you and yours.

In retrospect I think the problem with the buildings was that they were too close to the figures - mainly due to using the 3” grid so it was a little on cramped side.

I will certainly be planning and fighting further games and these will be appearing on the blog in due course.