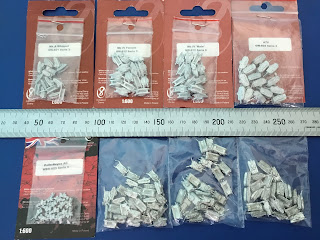 The vehicle selection I am working with for the present. The top are all Oddzial Ozmy WW1 types (as are the previously shown Rolls Royce armoured cars) whilst the three clear plastic bags contain Tumbling Dice WW2 types - T34, Sherman and Panzer 4

A fair amount of sorting out has been the order of the day today and the fruits of part of this are below. I did have a another lightbulb moment though in respect of what I will be doing first in respect of the 1:600th collection. If you remember I mentioned about my plan to use armies on a generic basis so that, for example, a khaki based army could be used for a variety of nations with just the specific equipment dropped in as required. This is where my thinking went. 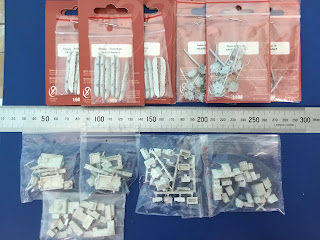 A selection of terrain. The top row is from Oddzial Ozmy and consist of trench sections and palm trees whilst below there are some of the Brigade Models 1:1200th scale buildings. The three on the left are for the Middle East, the centre are the Mediterranean and the right are Russian.

Painting a force in a khaki drill would enable me to tackle the British in the last years of the 19th century or I could use them as Turks for WW1. The loose order infantry strip I have in mind for tribal or skirmish types - for example Afghans, Arabs and certain Mahdist types, possibly Boers. There is certainly more than enough variety here for any number of actions. In many ways this project can be seen as a step up from the block armies which was the idea when I first acquired these figures a few years back.

As ever, plenty to think about.

In the meantime though, I have something else on the go - something that I have surprised myself with, especially as it is the first time I have done anything like this for a while....

Intriguing last paragraph! As for the other stuff, all sounds good and at that scale, little detail 'errors' will not be apparent.

Nice little figures Dave. They should look great with a lick or two of paint.

Great idea David to use 3mm figures so they can be used for several armies. I'm currently working on 10mm using Pendraken figures. Painting up 1916 Britt's and Germans.

All will be revealed by the end of the week - at least I hope so anyway!

The more I have been looking at the 1:600th stuff the better it seems for what I am planning. Let us not forget that Tumbling Dice also produce a massive amount of aircraft in the same scale from the Great War onwards.

There is also the ACW ships from Peter Pig and others, most of which feature some assorted gunboats.

Hopefully that will be all they need!

I have something else I am currently working on first though and a minor issue with the smaller stuff is that I have is the lack of appropriate basing but I will fall off that particular bridge when I get to it!

I was rather taken with 10mm as a scale and indeed, I dabbled with it a few years back for the Spanish Civil War but sadly never pursued it.

I think I may have found my sweet spot in terms of scales with the 28/30mm Del Prado and Spencer Smith figures and the 1:600th stuff.

Good luck with the Brits and Germans for 1916 - what rules are you looking to use?

Hi David, at first I was going game smaller battles using trench storm or trench hammer rules. You can download these on wargame vault. Due to the covid 19 quarantine, I decided to enlarge my forces and game larger battles. I want to try great war spearhead and Playing Leapfrog rules for division size battles.