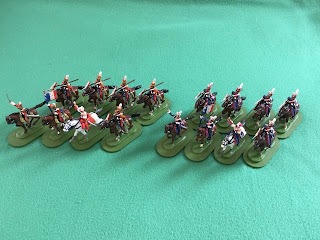 Lancers of the Guard - Dutch on the left, Polish on the right 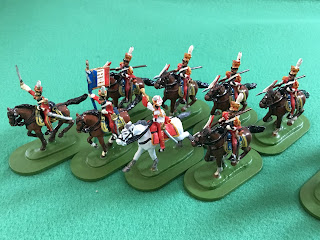 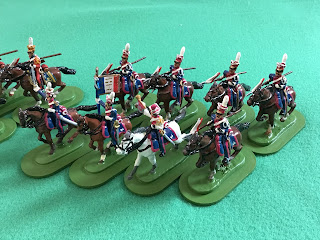 The Polish Lancers or as they were officially known: 1er Régiment de Chevau-Legers-Lanciers de la Garde Impériale. These are not available in the Del Prado range but came about as the result of a paint conversion by Old Painter Bob, and very nice they look as well!

What is not to like about a French Guard Lancer? I was rather pleased with the two units above, especially as I had the full command group for each although the trumpeter for the Dutch Lancers was acquired separately. These form part of the Guard cavalry selection I have along with the Horse Grenadiers and the Chasseurs a Cheval. In due course I will add the Empress Dragoons but for now I am in the rather embarrassing position of having nearly twice as many Guard cavalry as infantry!

Whilst on the subject of Napoleon’s Imperial Guard I recently took advantage of the Naval and Military Press Easter sale to pick up a copy of the tome you see below. 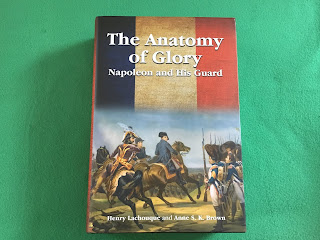 A great doorstop of a tome and a high quality reprint although the plates of the original version are now prints rather than glossy photographs. A snip at £7.99 down from £35!

I own an original edition of this work that I acquired at a boot sale but it is without the dust jacket and is in what I believe is known as ‘bumped’ condition. The cover and the body of the text look at though they have had an argument and there is a huge gap between them. For all that it is a cracking read though and I am very pleased to have a new version of this classic title.

They look lovely David... and speaking as someone who has just finished painting some shiny Horse Grenadiers of the Guard ahead of any of the necessary infantry that one would need for a game... I can honestly say.... there is no such thing as too much French Guard Cavalry 😁

That a lovely looking book as well...

The Red Lancers are very much ‘as is’ in terms of the paint job (the Del Prado’s varied quite a bit in this respect) but with the base and a coat of gloss varnish really come to life. Old Painter Bob did a really good job on the Poles so I have a great selection. The Horse Grenadiers I have were from the Relive Austerlitz range (not available in the UK) and whilst they look OK I am not a huge fan of the horses. You will see why in a later post!

I need to do something with the Guard infantry and will need to buy in some Guard Foot Artillery crew from Tradition at some point.

The Naval and Military Press Easter sale could have been hugely expensive for me but I managed to show commendable restraint with just the one book!

I have a reputation of being a great stealer of cavalry reserves (for the life of me I don’t know why....) so having the full weight of the Guard to call upon would not be a bad thing in my opinion!